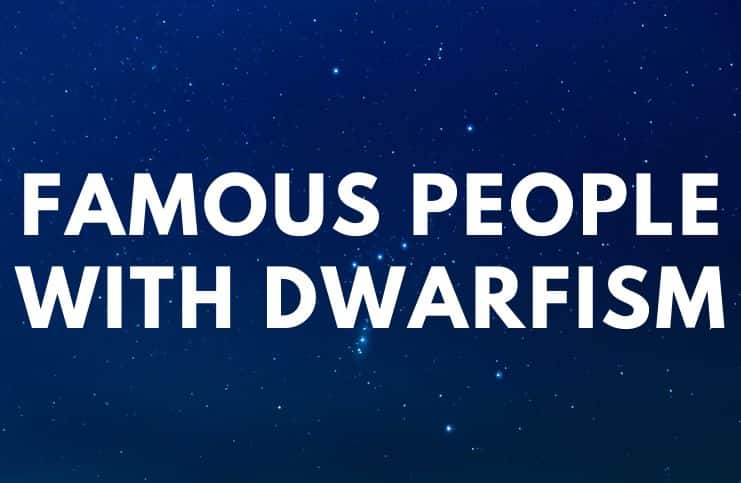 Dwarfism is a medical condition that is typically described as having a fully-grown adult height of under 4ftn 10in.

Dwarfism affects over 650,00 in the world and an estimated 30,000 people in the United States. They are usually of normal intelligence.

Around 80 percent of little people are born to parents of average size.

The 4 most common causes of dwarfism in children are:

The most often diagnosed cause of short stature is achondroplasia, a condition which results in disproportionately short legs and arms.

Symptoms of achondroplasia include the following:

In addition, Dinklage starred in the British film version of the comedy Death at a Funeral. Additionally, he played roles in films such as:

The actor has a form of dwarfism, achondroplasia, that affects bone growth. As a result, Peter is 135 centimeters (4 feet 5 inches) tall.

Barlup is a reality TV star who featured in rapper Lil Chuckee’s music video for his song, named -“Da Wop.” Bri gained fame after appearing on the TV series Little Women: Atlanta. She was also a club dancer.

The type of dwarfism that Barlup has is achondroplasia, a type of short-limbed dwarfism.

Her mother also has achondroplasia dwarfism.

He was an American stunt performer, comedian, and actor who played Mini-Me in the Austin Powers film series.

Troyer was only 81 cm (2 ft 8 in) tall, the result of cartilage–hair hypoplasia (a rare genetic disorder that is characterized by short-limbed short stature). This made Troyer one of the shortest men in the world.

He died on April 21, 2018. According to the LA County Medical Examiner-Coroner’s office, the death of Troyer has been certified as a suicide.

Look who my wife found at the Variety Tv Summit yesterday. As I warned him, Danny was about to discover who the smarter (and better looking) Priluck is! #dannywoodburn

Woodburn is an American activist for the disability rights movement linked to his dwarfism, comedian, and actor.

In 2014, Danny appeared in the film Teenage Mutant Ninja Turtles. He also played the role of Deputy Felix Shoe in the thriller – ”Life Blood.”

Woodburn graduated from Temple University School of Communications and Theater in 2001.

Moreover, he has had starring roles in Passions, Special Unit 2, Conan the Adventurer, and Crash & Bernstein. But, he is best known for portraying the role of Mickey Abbott on the TV show Seinfeld alongside Jerry Seinfeld.

He was an American activist and actor. In adult life, Barty stood three feet, nine inches (114 centimeters), due to a disorder of bone growth, named – cartilage–hair hypoplasia dwarfism.

Billy married Shirley Bolingbroke in 1963. The two had two children.

Billy began his acting career when he was 3 years old. Despite his short stature, Barty actively pursued competitive sports such as basketball.

He was an American actor who suffered from achondroplasia. Evans was 3 feet 2 inches (97 centimeters) tall.

Josh is best known for his role of Timmy Lenox in the soap opera Passions.

Josh died on August 5, 2002, during a medical procedure from complications related to a congenital heart condition.

Before she was on Little Women: Atlanta, Emily was a club dancer.

The type of dwarfism that Emily has is achondroplasia.

In 2016, she moved back to Dallas to be with family. She later joined the cast of Little Women: Dallas.

He was an English musician and actor who appeared in Labyrinth, Amadeus, Flash Gordon, Willow, Time Bandits, and The Elephant Man.

Baker is best known for portraying the character R2-D2 in the Star Wars franchise.

Amanda and Andrea are identical twin sisters who have achondroplasia dwarfism. Both appeared in the television series Little Women: Atlanta.

Before appearing in the series, the twin sisters were club dancers and performed together as the “Tiny Twinz.”

Born in London, Jack was an actor with dwarfism. When he was an adult, Jack stood at 4 feet 1 inch.

Purvis is best known for appearing in the original Star Wars trilogy.

His last role was in 1990 on Caspian director Alex Kirby’s TV fantasy The Silver Chair (1990).

He is an English producer, comedian, director, writer, television presenter, and actor.

Davis was born with Spondyloepiphyseal dysplasia congenita, an inherited bone growth disorder, which results in problems with hearing and vision (occasionally), characteristic skeletal abnormalities, and dwarfism.

Warwick played in the sitcom Life’s Too Short, directed and written by Stephen Merchant and Ricky Gervais.

Moreover, he played Griphook and Professor Filius Flitwick in the Harry Potter films, the Ewok Wicket in Star Wars Episode VI: Return of the Jedi, and the title characters in Willow and the Leprechaun film series.

He is an American television personality, professional skateboarder, stunt performer, and actor, who is one of the hosts of Fox Sports Net’s skateboarding show 54321. In addition, Acuña is one of the stars of Jackass on MTV.