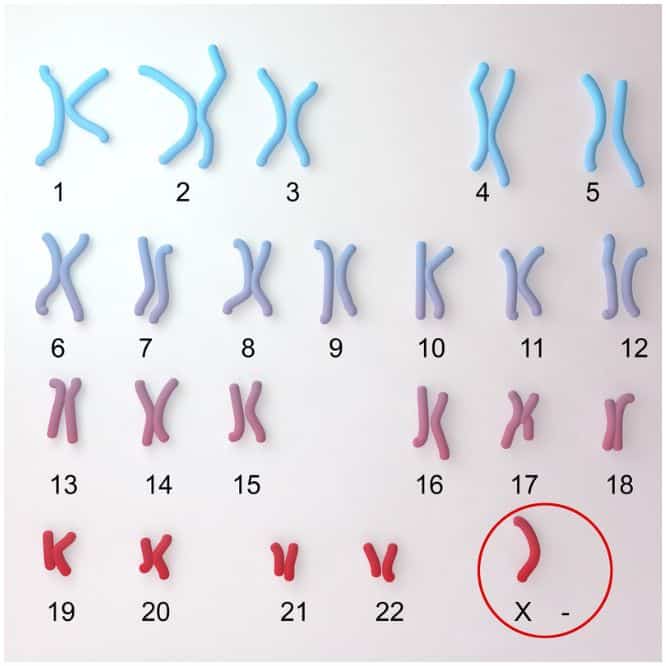 Turner syndrome (TS) is a genetic condition that occurs in females only. It is one of the most common chromosomal disorders and probably the most common genetic disorder of females.

TS occurs in approximately 1 in 2,500 female births, however, it is much more common among pregnancies that do not survive to term.

This syndrome is named after Henry Turner who, in 1938, was one of the 1st medical doctors to report on the syndrome in the medical literature.

He observed a group of girls who all had the same unique physical features – webbed necks, short height, and undeveloped sex features.

The disorder results when a female’s cells have one normal X chromosome and the other X chromosome is either structurally altered or missing.

The absent genetic material affects the development of the sufferer.

There are no known reasons for the partial or complete absence of one of the X chromosomes, and the condition appears to happen randomly.

The most common characteristic of TS is short stature, which becomes evident by about age 5.

Note – some patients may have learning problems, especially in math as well as struggles with tasks needing spatial skills, like – visual organization or map reading.

Women with TS are more likely to be affected by some other health conditions, especially:

TS is diagnosed using a blood test known as a karyotype. This type of blood test analyzes the chromosomal profile of the patient to determine whether the X chromosome is missing or incomplete.

This may be done by taking a blood sample after birth or by taking a sample of the amniotic fluid while the baby is still in the uterus. If one X chromosome is absent or incomplete, this syndrome is confirmed.

Additionally, your healthcare provider may order tests to look for the physical symptoms of TS. These tests may include:

While there is no cure for TS, the use of growth hormones can stimulate growth and help a girl achieve a more normal height.

Children with TS have a remarkable prognosis when treated with growth hormone and estrogens.

Girls with TS should also have regular evaluations to detect health problems which may result from this syndrome. Evaluations include the following:

Here is a list of celebrities with Turner Syndrome:

With Red Rocks competing for another trip to NCAA champs this weekend, we remember a Ute great. #tbt #redrocks #missymarlowe #allamerican

She is a 5-time NCAA individual champion who led Utah to 2 NCAA Gymnastics Championships during her career.

Missy began gymnastics at a young age and spent much of her competitive career with Mark Lee of Rocky Mountain Gymnastics.

Marlowe was also the first college gymnast to score a perfect 10 on all 4 events and scored seven 10.0s in her career.

Linda Hunt was also born with Turner’s Syndrome. She is a famous actress who is known best for her role in The Year of Living Dangerously where she won an Academy Award.

Additionally, Linda has had great success in films, like:

She has also voiced the character of Management on HBO’s “Carnivale.” Plus, Linda is frequently heard narrating documentaries for the Discovery Channel.

Lastly, Linda Hunt became the first person to win an Oscar for playing a role of the opposite sex.

She was born on May 16, 1947, in Queenzieburn, Stirlingshire, Scotland.

She is a medical genetics doctor in Akron, Ohio who also has this syndrome. Recently, Catherine adopted a 4-year-old girl, who also has Turner syndrome.