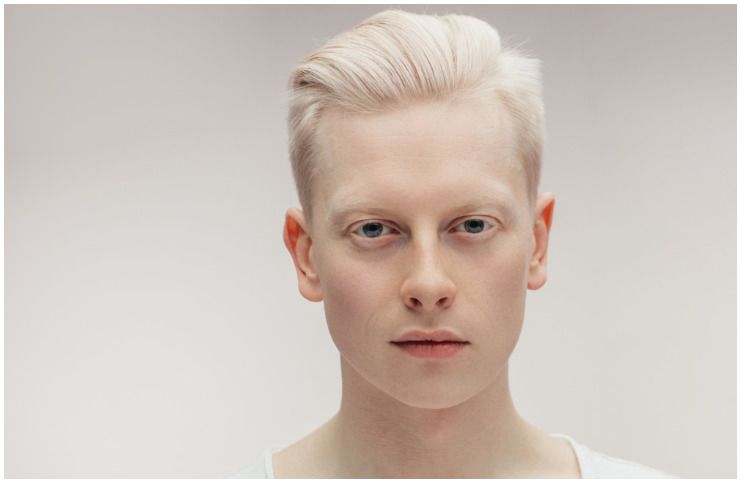 Albinism includes a group of inherited disorders that can be described by little or no production of melanin – the pigment which gives human hair, skin, and eyes their color. Animals and even plants can have this condition.

The term is from the Latin word ”albus” that translates as “white.”

About 1 in 18,000 to 20,000 Americans have a form of albinism, according to the National Organization for Albinism and Hypopigmentation. In sub-Saharan Africa, the rate of albinism is around 1 in 5,000.

People with albinism are just like anyone else, with the same ability to reach their goals and lifespan.

The most common type of albinism is oculocutaneous albinism (OCA), which affects the hair, eyes, and skin. In its most severe form, skin and hair remain completely white throughout life.

The 2nd most common type of the condition is ocular albinism (OA), in which skin and hair are normal and only the eyes lack color.

The condition occurs when one of several genetic defects makes the body unable to distribute or produce melanin. These defects may be inherited through families.

People with this condition often have trouble with their eyesight.

They may wear contact lenses or glasses to help correct problems like farsightedness, nearsightedness, or astigmatism. Typically, sufferers who have the least amount of melanin have the poorest vision.

Other complications that may occur include – a higher risk of developing skin cancer and emotional problems.

Here Is A List Of 10 Famous People With Albinism:

She is an albino model who rose to fame under the professional alias Kiker Chan.

Zhidkova got into modeling by way of cosplaying Japanese anime characters.

Furthermore, she is recognized for her delicate and ethereal editorial work and has amassed over 87,000 followers on her kiker_chan Instagram account.

He was a news correspondent on CNN and ABC before hosting his own show, Anderson Cooper 360, an hour-long newscast on CNN which quickly accrued an audience for its intelligent, occasionally bemused take on the day’s top stories.

From ages 10 to 13 he modeled for Ralph Lauren.

She is a South African entertainer and model born in Rockville, Soweto. She is best known for being the first albino model to appear on a runway in South Africa.

Refilwe started her modeling career at the age of 13 when she was approached by Y! magazine.

Her first appearance in a show was in 2005 for designer David Tlale.

In an interview, she has said that she ”lives in the skin of a white person” and spoken out about the stigma and hardship endured growing up as an albino in South Africa.

He is an American community activist, rapper, and member of the Rhymesayers Entertainment hip-hop collective.

In 2017, following a lengthy break between releases, Brother Ali issued the Ant-produced All the Beauty in This Whole Life, his first album since “Mourning in America and Dreaming in Color” in 2012.

Diandra was born in the Bronx, New York City, on October 22, 1989, to African American parents.

She is not the only albino in the family — of her 3 siblings, Diandra also has a brother with the same condition.

She a famous albino and the first female model with albinism to be signed to a major modeling agency.

He is an American actor and stand-up comedian. He is African American and albinistic. Also, Victor was born legally blind due to his Albinism.

Victor grew up in Huntsville, Alabama, later moving to Minneapolis, where he worked with the local improvisation troupes The Bad Mamma Jammas, ComedySportz MN, and a few regional theater companies.

Currently, he is a member of Chicago City Limits, New York longest-running comedy theater company for which he writes and performs regularly as a stand-up comedian.

She was born in British Hong Kong to a Chinese family and is a supermodel.

Like many people with albinism, Connie Chiu has to protect her photosensitive skin and eyes from the sunlight. As a result, her family moved to Sweden when she was 7 years old.

The DJ, actor, and model isn’t just unique-looking, he is also stylish and living a glamorous Parisian life which he chronicles on his Instagram account, by the name jewelljeffrey.

He is an American professional actor, fashion model, and dancer of African descent.

Shaun was the first model to work for such high-end fashion designers, like – Givenchy and Alexander McQueen.

He has also been featured in photo-editorial campaigns in fashion publications including Italian Vogue, British GQ, Paper Magazine, i-D Magazine, and Another Man.

His albinism made him the object of much bullying.

My thoughts when it comes to representation is that there is a distinction between assimilation and inclusion. Inclusion: is embracing the value of the uniqueness and authenticity of an image that is being represented without the PRESSURE of the said image conforming to the perspectives of the dominant culture. Assimilation is a process that I see as conditional representation. It is the process of representing an image ON CONDITION that it conforms, complies and behaves in a manner that is line with the perspectives of the dominant culture. Assimilation is an act that preserves the status quo along with the power dynamics embedded within, while inclusion is an act that pursues equality. Just a thought 🙂 Photographer:@richardkeppelsmith Make up: @tash_pops Creative director: @fashion_friend1 Hair: @urban_mimz master of braids! #thandohopa#photograpy#activist#activism#fashion#writer#diversity#inclusion#representaion#feminist#feminism#art#albinism#blackgirlmagic#beauty#iamenough#model#actress#southafrica#internationalmodel#afro#kinkyhair#naturalhair#authenticity#mediaactivist#thoughtleader#narratives#storyteller#representationmatters

She is a 24-year-old model who is also a lawyer. Currently, Thando is the new face of Audi Q2 compact SUV.

”I eventually decided beauty is a decision and I am going to be beautiful despite what people say.”

”My tagline now is a different shade of normal.”