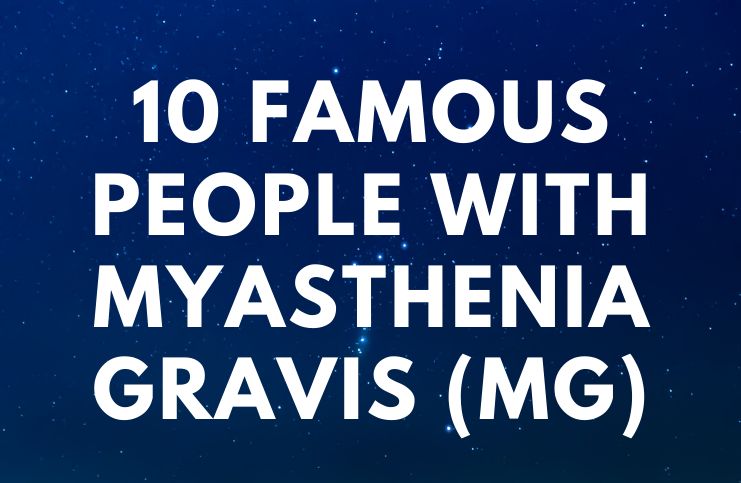 Myasthenia gravis (MG) is a chronic autoimmune neuromuscular disease that is characterized by rapid fatigue and weakness of any of the muscles under your voluntary control.

It affects 50 to 200 million people worldwide. MG is not directly inherited nor is it contagious.

The symptoms of MG may include:

Note – around 18% of patients with MG experience myasthenic crisis, a condition that is characterized by severe weakness of the respiratory and bulbar muscles.

MG is caused by a breakdown in the normal communication between nerves and muscles.

There is no known cure, however, with current therapies most cases of MG are not as “grave” as the name implies.

Here Is A List Of 10 Famous People With Myasthenia Gravis:

He is a former American football quarterback, who played collegiately for Auburn University.

Brandon Cox was diagnosed with MG in his 10th-grade year in high school, however, he fought the chronic autoimmune disease and continued to play football.

SEE ALSO:  How Many Calories Do Squats Burn? + Health Benefits

He was an English actor and director who is known for his numerous Shakespeare roles on screen and stage as well as memorable turns in more modern classics.

Laurence starred alongside Marilyn Monroe in The Prince and the Showgirl.

Olivier also starred in the film versions of Hamlet, Henry V, and Richard III, and played more than 100 roles on stage.

Laurence Olivier was also diagnosed with myasthenia gravis and on July 11, 1989, he died in Amhurst, England.

He was an ethnic Greek-born in Smyrna in the Ottoman Empire in what is now Turkey and became a billionaire shipping tycoon.

Onassis owned islands, like – Sparta and Scorpios, and had accounts in more than 200 banks across the world.

Onassis worked for a telephone company after serving for Greece in World War I.

He died at age 69 on 15 March 1975 at the American Hospital of Paris in Neuilly-sur-Seine, of respiratory failure, a complication of the MG from which he had been suffering during the last years of his life.

She is an American actress with film and television credits who is best known for her role as Maggie Horton in Days of Our Lives.

Rogers was also a dancer at the NYC Radio City Music Hall.

SEE ALSO:  Invega vs Risperdal – Comparison of Uses & Side Effects

Suzzane was diagnosed with MG, but, presently, she is in remission and lives a prosperous and healthy life.

He was an American film and television actor, screenwriter, and producer.

Roger was also a talented singer as well as a guitarist and a standout college football player.

Plus, he is also known for his marriage to actress Ann Margret.

He was married to Victoria Shaw.

He had fought myasthenia gravis for many years. In addition, he left 77 Sunset Strip in 1963 after doctors discovered a blood clot in his brain.

He was a leading Indian movie, playwright, and television writer, political journalist, literary essayist, and social commentator primarily in Marathi.

Vijay Tendulkar is also the subject of a short film, Ankahin (“The Untold”) and the documentary Tendulkar and Violence: Today and Yesterday, both released in 2007.

He was suffering from MG and died at 80 years old.

He is a British television and film producer who is best known for executive producing the BBC spy drama Spooks and founding the Kudos production company.

Stephen Garrett is also known for writing and producing The Night Manager (2016), Eastern Promises (2007), and Salmon Fishing in Yemen (2011).

On Feb. 25, 2008, he checked into Baptist Hospital East and was diagnosed with MG after several tests.

He was the son of author A. A. Milne. As a child, Christopher was the basis of the character Christopher Robin in his father’s Winnie-the-Pooh stories and in 2 books of poems.

SEE ALSO:  Pantoprazole vs Nexium - Which Is Better To Treat Acid Reflux Disease?

Robin Milne had one child, a daughter named Clare, who had cerebral palsy.

She died in 2012 at the age of 56 from natural causes due to a heart abnormality.

Christopher Robin Milne lived for some years with MG and died in his sleep on April 20, 1996 in Totnes, Devon, at the age of 75.

He is an Indian film producer, television host, actor, and former politician.

Amitabh first gained popularity in the early 1970s for films like Zanjeer, Deewaar, and Sholay.

His performances in films such as Silsila, Shaarabi, Jaadugar Laawaris, Coolie, and Naseeb landed him multiple Fanfare Awards and continued to enamor fans of the tall and handsome action hero.

Amitabh Bachchan was diagnosed with MG and was unable to perform even the simplest of tasks, such as – lifting his arms or brushing his teeth or walking a few steps.

He was a Jamaican roots reggae, keyboardist, and melodica player active from the 1970s onwards. Augustus Pablo also helped invent “dub” music, a genre of music that grew out of Reggae music in the 1960s.

On May 18, 1999, he died as a result of a collapsed lung. Augustus Pablo had been suffering for some time from MG.