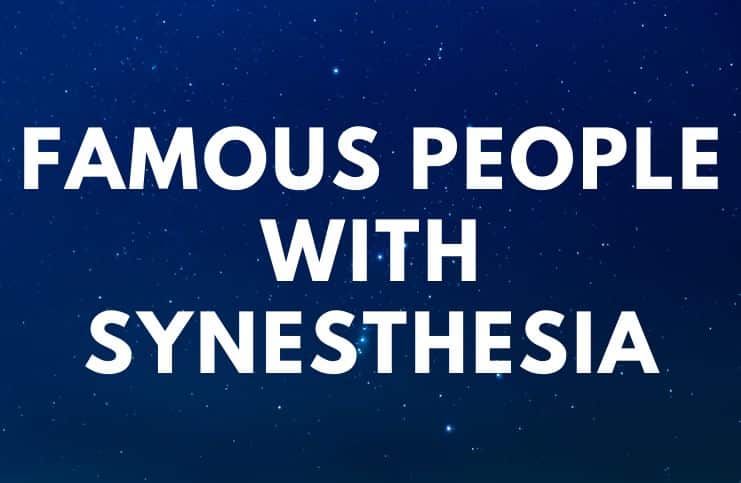 Synesthesia is a condition which describes how senses blend to create a fuller sense of an object, color, feeling, or taste. Simply put, when one sense is activated, another unrelated sense is activated at the same time.

The condition occurs exclusively in the left hemisphere (left brain is connected to – thinking in words, facts, mathematics, linear thinking, sequencing, and logic) and is associated with decreased blood flow to the neocortex.

The American Psychology Association suggests it affects one in 2,000 people. Synesthesia runs strongly in families, however, the precise mode of inheritance has yet to be ascertained.

Chromesthesia is a form of synesthesia, where a sound is associated with a color. The sound of music, a word, or a voice causes people who have this form of synesthesia to see colors in their mind’s eyes or to visualize colors around them. This type is quite common among musicians.

Lexical-Gustatory Synesthesia is a type of synesthesia where people experience different tastes that correspond to specific words or phonemes.

One of the most common types of synesthesia is called grapheme-color. This is where an individual experience colors at the same time as seeing a letter or a number.

Some less common form includes mirror-touch synesthesia, that causes some people to experience a physical feeling when other people are touched.

Here Is A List Of Famous People With Synesthesia

Billy Joel, commonly nicknamed the “Piano Man,” is an American singer-songwriter and pianist who has been making music since the 1960s.

In an interview, he said – ”When I [see] a particularly vivid color, it is usually a strong melodic, strong rhythmic pattern which emerges at the same time. When I think of these songs, I think of vivid reds, oranges, and golds.”

He is a record producer and Grammy Award-winning rapper. In addition to his musical success, Kanye West has proven himself to be an astute businessman and an important voice in the fashion industry.

Kanye told the audience and host Ellen DeGeneres – “I have a condition called synesthesia where I see sounds. Everything I sonically make is a painting. I see it. I see the importance and the value of everyone being able to experience a more beautiful life.”

He was an American composer, conductor, music lecturer, author, and pianist. Leonard Bernstein served as Music Director of the New York Philharmonic and conducted the world’s major orchestras.

In addition, he authored many books about music, in which he details how the timbre of music appears to him as different colors and informs the way he orchestrates compositions.

Marilyn Monroe is an American actress who became a major sex symbol, starring in many successful motion pictures during the 1950s.

She was a synesthete, according to biographer Norman Mailer.

“He recounted evenings when all Norma Jean served were peas and carrots. She liked the colors. She has that displacement of the senses which others take drugs to find. So she is like a lover of rock who sees vibrations when he hears sounds…It also provides her natural wit…she did not have a skin like others.”

He is an American singer and songwriter who gained fame for his Oscar-nominated hit song ”Happy.”

In an interview with Psychology Today, Pharrell Williams said – “There are seven basic colors: red, orange, yellow, green, blue, indigo and violet. And those also correspond with musical notes…White, believe it or not, which gives you an octave is the blending of all the colors…”

Synesthetes have suspected that Van Gogh may have had synesthesia for some time, especially due to the modern belief that he had Asperger’s Syndrome (a developmental disorder characterized by important difficulties in nonverbal communication and social interaction) that is typically linked to the trait of blended senses.

She is an American filmmaker, author, actress, and comedian. Anna Akana is known for her YouTube channel, that has over 2,2 million subscribers and over 205 million video views.

Here YouTube description states – “Though I have a very mild form of synesthesia (some people can taste words, see sounds, hear colors or their colors/letters have personalities) I really do love having it.”

Stevie Wonder is considered to be one of the most creative musical performers of the 20th century.

He reportedly has sound-color synesthesia whereby even though he is blind, he ”sees” the color of the music.

She is an American singer, record producer, songwriter, and actress. Mary has won 9 Grammy Awards and started her career as a backing singer on Uptown Records in 1989.

In an interview at LA Confidential, she said – ”I have that condition, synesthesia. I see music in colors. That’s how my synesthesia plays out.”

He is an abstract expressionist painter and photographer from Belfast.

In an interview with The Independent, Jack said – “The inner complexities of my synesthesia are truly incomprehensible – my life, vision, and artistry are immersed in tetrachromatic iridescence.”

He was an American theoretical physicist, known for his work in the path integral formulation of quantum mechanics, the physics of the superfluidity of supercooled liquid helium, and the theory of quantum electrodynamics.

In his book, Richard wrote – “When I see equations, I see the letters in colors – I don’t know why. As I’m talking, I see vague pictures of Bessel functions from Jahnke and Emde’s book, with light-tan j’s, slightly violet-bluish n’s, and dark brown x’s flying around.”

She is a Swiss-Canadian actress, filmmaker, voice actress, and screenwriter. Stephanie Morgenstern is known for playing the role of Regina in Dino Crisis and Dino Crisis 2.

In an interview, Stephanie said – ”A few years ago, I mentioned to a friend that I remembered phone numbers by their color. He said, “So you’re a synesthete!” I hadn’t heard of synesthesia – I only knew that numbers seemed natural to have colors: five is blue, two is green, three is red… And music has colors too: the key of the C# minor is a sharp, tangy yellow, F major is a warm brown…”

He was one of the most influential psychiatrists of his time. Eugen is best known today for his introduction of the term schizophrenia (a disabling, chronic, and severe mental illness).

She is a popular Canadian singer of Italian descent, her specialty being Rhythm & Blue Pop with strong undertones of Jazz.

In an interview, Alessia Cara said – “I don’t even see it as a gift, I just see it as something that happens.”

He is an autistic savant. Daniel can perform mind-boggling mathematical calculations at breakneck speeds.

Tammet seems to have experiences which are indicative of several types of synesthesia, rather than just 1 singular type.

He was a French geographer, explorer, ethnologist, linguist and astronomer notable for his travels in Ethiopia during the 1st half of the 19th century. Antoine had number form synesthesia.

Rollo Armstrong is an English music producer who founded the electronic band Faithless and collaborated with Sister Bliss and Rollo.

He was an American pianist, composer, and bandleader of a jazz orchestra.

Duke Ellington once said – “I hear a note by one of the fellows in the band and it’s one color. I hear the same note played by someone else and it’s a different color. When I hear sustained musical tones, I see just about the same colors that you do, but I see them in textures. If Harry Carney is playing, D is dark blue burlap. If Johnny Hodges is playing, G becomes light blue satin.”

He is a German film score composer and record producer who is recognized as one of Hollywood’s most innovative musical talents.

Hans Zimmer speaking with Alex Billington said – “It’s like he starts talking, [and] I have to score it. [I] just start hearing colors, and he’s a painter — he sees colors — I hear colors.”

She was an American composer and pianist. Amy Beach was the first successful American female composer of large-scale art music.

In a book of Walter Jenkins, it is stated that – “Amy’s mother encouraged her to relate melodies to the colors blue, pink, or purple, but before long Amy had a wider range of colors, which she associated with certain major keys. Thus C was white, F-sharp black, E yellow, G red, A green, A-flat blue, D-flat violet or purple, and E-flat pink. Until the end of her life, she associated these colors with those keys.”

She is a Welsh singer and songwriter. Marina has been diagnosed with synesthesia and consequently associates specific colors with musical notes and days of the week.

He is a Canadian cartoonist. His first book, A Search for Meaning: The Story of Rex, was self-published in 1998.

In an interview with Psychology Today, Michel Gagné said – ”I have had an episode of a synesthetic nature from an early age but I had no idea what they were. In fact, I used to describe these experiences with my eye doctors who didn’t seem to know what I was talking about.”

She is a singer and songwriter who is known for her influence on the 1990s alternative music scene and her piano-driven songs.

Amos said – “The song appears as light filament once I’ve cracked it. As long as I’ve been doing this, which is more than 35 years, I’ve never seen a duplicated song structure. I’ve never seen the same light creature in my life. Obviously, similar chord progressions follow similar light patterns…try to imagine the best kaleidoscope ever”

He is an American songwriter, multi-instrumentalist, actor, and director.

Sam Endicott said in the Slow Poison video premiere – “Synesthesia is when your brain sees music as colors. That is what my brain does, and these are the colors I see when I hear this song.”

He is a Belgian computer scientist and informatics engineer who created the 1st web browser for the Mac. Robert archived website includes his color-coded alphabet.