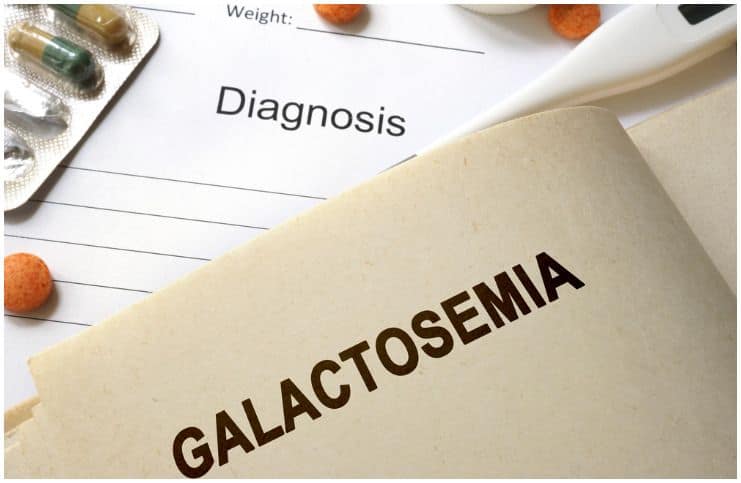 Galactosemia is an inherited disease that reduces the body’s capacity to metabolize galactose, which belongs to simple carbohydrates. Because this simple sugar cannot be broken down properly, it builds up in the blood.

The prominent symptoms include:

Here Is A List Of 22 Interesting Facts About Galactosemia:

2 Females and males are equally affected. The disorder appears to be more common in the Caucasian population. Clinical variant galactosemia occurs most frequent in native Africans in South Africa and African Americans who have a specific GALT gene mutation.

3 The disorder is thought to be much less common among Asian people. The Duarte variant occurs in about 1 in 16,000 live births.

4 There are four types of galactosemia:

5 Common symptoms include the following:

6 Note – for a newborn with classic galactosemia, the above symptoms may start within several days of starting to drink a cow’s milk-based baby formula or breastfeeding.

When to Call the Doctor

7 Parents should notify their healthcare professional if their child displays any of the signs or symptoms of galactosemia.

9 Mutations in the GALT, GALK1, and GALE genes cause galactosemia. The gene mutation that occurs is inherited in what is known as an autosomal recessive pattern. This means that 2 copies of the defective gene have to be inherited for galactosemia to appear.

If two carriers conceive a baby, that baby has:

10 People with a family history of galactosemia are at great risk of inheriting the disease.

11 The diagnosis of the disease is established by detection of:

12 A galactose tolerance test should never be done since it may be harmful to the infant.

13 All 50 states in the United States test newborns for the disease.

14 In order to avoid the consequences of the disease, which may include cataracts and/or brain damage, kidney dysfunction, and liver failure, babies must be treated promptly by removing lactose from the diet.

15 The following foods must be avoided:

16 Soy-based formulas are given as an alternative unless there is a liver disease. This diet should be continued for life.

17 If your baby doesn’t tolerate a soy-based formula, an elemental formula, like – Alimentum (contains a predigested protein which is broken down into small pieces) or Nutramigen may be used instead. However, these elemental formulas do have some galactose.

18 The dietary treatment is usually insufficient in preventing long-term complications, like -social, cognitive, and reproductive impairments.

20 According to studies, the restriction of galactose intake by the mother during pregnancy may not improve the outcome in siblings with the disease.

21 Most individuals who are diagnosed early with the disease and carefully follow a galactose-free diet, appear to reach adulthood. If untreated, classic galactosemia is a life-threatening disease. Boys usually have a normal testicular function, whereas girls usually have ovaries that do not function properly.

22 The disease is not preventable.