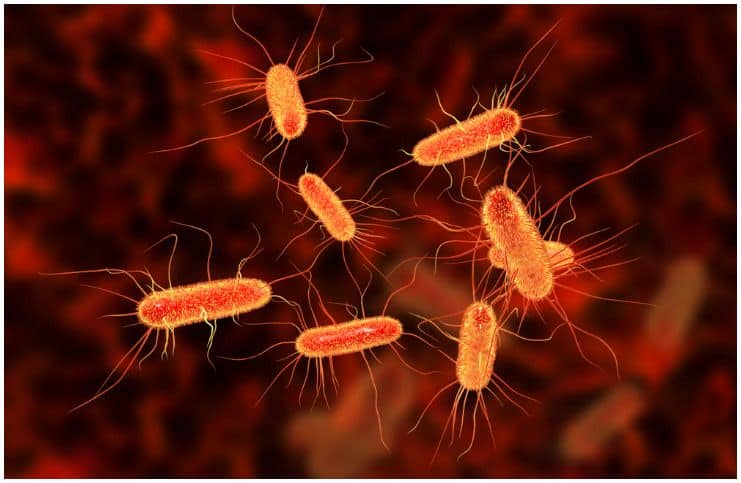 #1 E. coli (full name – Escherichia coli) bacteria is named after a German pediatrician – Theodor Escherich, who discovered it in 1885. He originally named it ”Bacterium coli commune,” then, in 1895, it was reclassified and named after its discoverer.

#2 Most strains of this bacterium are harmless and live as normal flora in the gut of animals and humans.

In the laboratory, the K-12 strain can be used to make useful compounds, such as – human growth factor, human insulin, epidermal growth factor (used to treat wounds and burns), and taxol (a cancer treatment).

#3 These bacteria can protect your large intestine against harmful colonies of bacteria and even assist in digestion (for instance, they help synthesize vitamins K and B-complex) and improve food absorption.

#5 Some foods that many healthcare specialists consider to be high risk for Escherichia coli contamination include:

#6 Other sources of contamination include:

SEE ALSO:  Colchicine vs Allopurinol - Which Is Better For Gout Treatment?

#7 People who have lowered stomach acid, either due to medicines that lower stomach acid or stomach surgery, have a higher risk of infection.

#8 The most frequent E. coli strain linked to foodborne illness is the Shiga-toxin-producing E. coli – 0157: H7. It is responsible for many different reports of contaminated beverages and foods.

#9 This strain was identified in 1982 following an outbreak of diarrhea resulting from the consumption of undercooked beef. It is a serious public health concern due to the high potential for outbreaks and the risk of other serious complications.

#10 According to data from the Centers for Disease Control and Prevention (CDC), it is one of the most frequent cause of foodborne illness in the United States, sickening about 265,000 individuals per year.

#11 Besides food poisoning, it can cause neonatal meningitis, septicemia, and gastroenteritis. It is estimated that infections caused by this bacterium account for more than 2,000 hospitalizations every year in the US.

#12 Uncomplicated cases of food poisoning due to these bacteria clear up within five to ten days and can be treated at home. It is recommended to drink plenty of fluids and get plenty of rest.

According to a 2018 multi-institutional study that was done at the Washington University School of Medicine, individuals with blood type A have increased chances to develop severe illness from an E. coli infection.

#13 If you cannot ingest plenty of fluids or if your symptoms are harsh (including severe abdominal pain or blood in your stools), you should seek medical care.

SEE ALSO:  Dexilant vs Omeprazole – Comparison of Uses & Side Effects

#14 Antibiotics are not part of the treatment of individuals with these types of problems and may actually increase the risk of subsequent HUS. In addition, antidiarrheal agents should be completely avoided.

#15 Definitive diagnosis is done by culturing the bacteria from the patient‘s stool or by immunological tests.

In 2018, new technology was developed that allowed the detection of RNA from different pathogenic strains of Esecheria coli, according to the scientists at the University of California, Davis, University of Washington. “Our technique could pave the way for rapid, straightforward detection of antimicrobial-resistant bacterial strains, pathogens, and biomarkers for cancer,” said Josh Hihath, one of the scientists.

#16 Symptoms and signs of E. coli infection include:

This disorder happens when Shiga toxins get into the bloodstream and cause the section of the kidney which filters toxins out of the blood to break down, leading to kidney injury and in rare occasions to kidney failure.

#19 How to avoid this type of infection:

SEE ALSO:  Jardiance vs Farxiga - Comparison of Uses & Side Effects

#20 Beef is still the 3rd most common food commodity to be linked with this infection, just behind fish and dairy, despite over twenty years of progress made to reduce beef-related outbreak.

On March 26, 2018, a manufacturer of fresh raw meals for dogs – Darwin’s Natural Pet Products of Tukwila, Wash., recall a total of four lots of products after testing showed that some of their products may contain E. coli.