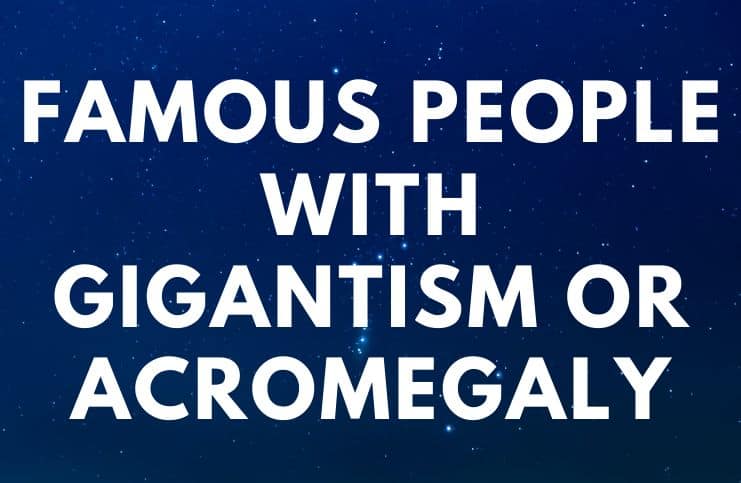 Gigantism is a rare disorder which causes abnormal growth in children. This excessive growth makes the child extremely large for her or his age.

The most common cause is a noncancerous tumor of the pituitary gland. Nevertheless, it can also develop due to the following disorders:

Acromegaly is a similar condition, however, it appears after the growth plate cartilage fuses in adulthood. It is most often diagnosed in middle-aged adults, however, symptoms can appear at any age.

The goal of the treatment is to reduce the overproduction of the growth hormone. This may be accomplished through the combination of surgery, medication, and radiation.

Here is a list of top 10 famous people with gigantism or acromegaly:

He is an American actor and professional wrestler and is better known by the ring name Big Show.

In early 2017, he stated in an interview that he planned to retire from active competition in World Wrestling Entertainment in February 2018.

John Rogan, the son of William Rogan, was born in Hendersonville, Tennessee, on February 16, 1868. He started to grow very rapidly at the age of 13 leading to stiffness of a joint, and eventually, he could not stand.

John moved around in a cart pulled by goats. By the year 1899, John Rogan had already reached a height of 2.59 meters (8 feet 6 inches) and became a local celebrity, also referred to as the ”Negro giant.”

He was a French actor and professional wrestler who fought with Hulk Hogan (one of the most popular and charismatic wrestlers of all time), culminating at WrestleMania III.

Because school buses couldn’t accommodate his large size, Samuel Beckett offered to take him in his truck.

He died at age 46 of congestive heart failure. His cremated remains totaled 17 pounds (about 8 kg).

Moreover, he was frequently called “Captain”, a nickname given to him by the Queen of England when George was a London bobby standing guard outside her palace.

Apparently, Leonid disliked being so big since it prevented him from accomplishing common goals, such as – getting married or his lifelong dream of being a veterinarian.

He died at age 44 due to health problems.

He was a native of India and probably India’s tallest man (8 ft 3 inch) until his death on June 30, 2007. Vikas Uppal died during a brain tumor operation in Delhi.

He is an Indian-born American semi-retired professional wrestler and actor, and is better known by the ring name ”The Great Khali.”

On October 2000, he debuted in the world of professional wrestling, under the name Giant Singh.

In 2006, he defeated ”The Undertaker” and became the World Heavyweight Champion. His last proper wrestling match in the WWE came in October 2014, when he faced Rusev.

He was a  wrestler, circus and freak show giant, strongman, and a star in Barnum and Bailey’s circus.

According to some source, he weighed between 9 and 14 pounds at birth. Edouard Beaupré was one of the tallest men in recorded history.

Robert Wadlow, also known as the Giant of Illinois or the Alton Giant, was the tallest man who ever lived (at least, in the recorded history). The previous record-holder was an Irishman who in 1877 had reached 8 feet and 4 inches.

Robert Wadlow was born in Alton, Illinois and appeared completely normal and healthy at birth, weighing around 8.4 lb (3.8 kilograms).

On his 21st birthday, he reached a final height of 8 feet 11 inches (272 cm) and a weight of 491 pounds. He was forced to wear leg braces, however, he never used a wheelchair.

He died on July 15, 1940, due to an inflamed leg, and was buried in a coffin which measured approximately 11 feet. 46 years after his death, a statue was built in Alton, Illinois dedicated to his memory.

He is an Argentinian wrestler and basketball player, who was described as being as high as 8 foot during his wrestling career and 7ft 7 during his basketball career.

Sultan Kösen (born 10 December 1982) is a Kurdish Turk who holds the Guinness World Record for the tallest living male at 8 ft 2.82 inch (251 centimeters).

His stature is such that he must use crutches in order to walk.

There were some rumors that Yao Ming has gigantism or acromegaly, however, he does not have any of these conditions.

Do you know any other celebrity with gigantism or acromegaly? Please let us know in the comments below.