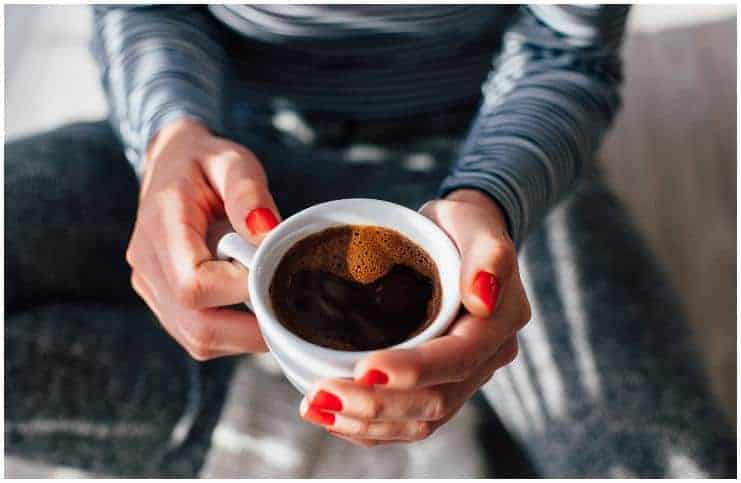 It is a common drink produced from the beans of Coffea arabica bush. Over 80% of Americans adults drink at least one cup of coffee per day.

Regular coffee drinkers have up to an 85 percent lower risk of developing cirrhosis (an abnormal liver disorder in which there is irreversible scarring of the liver), with the most potent effects in people who drink four cups a day.

According to the data, people who consume the most coffee have about 45 percent reduced risk of getting type 2 diabetes mellitus, a chronic disease which affects the way the human body handles glucose (sugar).

This drink can help to decrease the risk for many serious diseases, such as Parkinson’s disease, a neurodegenerative disorder of the central nervous system which mainly affects the motor system.

One cup of coffee has fast absorption with caffeine uptake to the bloodstream in approximately 20 minutes. Also, the caffeine will stay in the blood for over 12 hours.

Caffeine in the human body acts as a laxative by increasing contraction in the large and small intestinal muscles. These contractions can cause predigested food to move into the colon, leading to stomach cramps.

Regular coffee drinkers have a higher risk of mild hypertension. This, in the long run, may increase your chance of developing cardiovascular disorders. For instance, according to a recent study, the regular consumption of coffee can increase the risk of myocardial infarction (happens when blood flow decreases or stops to a part of the heart) in patients with untreated mild hypertension.

Caffeine also causes a more frequent need to urinate due to the fact that it increases blood flow through the kidneys and dilates the blood vessels.

More importantly, studies examining the effects of caffeine on pregnant women concluded that those who intake more than 200 mg of caffeine per day have a 100 percent increased chance to have a miscarriage compared to pregnant women who did not intake any caffeine from any source (coffee, tea, chocolate).

Note – the amount of caffeine required to cause these side effects varies from individual to individual. However, individuals suffering from type 2 diabetes mellitus, mood disorders,  kidney disease, hypertension, are more prone to side effects and should limit their intake of coffee.

These drinks contain a mixture of caffeine and other stimulants and are produced to enhance alertness quickly. For most people, they are an alternative to coffee for an afternoon pick-me-up.

Energy drinks are very popular with teens and young adults because of their temporary boosting benefits, that help increase alertness, physical and mental energy. For instance, according to the statistics, more than 30 percent of teenagers consume energy drinks once per week.

Note – don’t confuse energy drinks with sports drinks (like Powerade or Gatorade), that provide energy mainly from simple carbohydrates that transform into glycogen and fuel your muscles. Energy drinks also include simple sugars, however, in a considerably higher concentration than sports drinks.

Energy drinks usually contain caffeine, along with B-complex vitamins, ginseng, taurine, milk thistle, guarana, sugar (a 250 ml can of Red Bull contains 27.5 g of sugar), high fructose corn syrup, and ginkgo biloba extract (a plant extract which has been used in China to treat many types of health ailments for centuries).

There are a few different types of energy drinks, from coffee to carbonated fruit-flavored beverages. Most of their side effects come from their high caffeine content as well as due to the content of food additives and other stimulants (like taurine).

All of the caffeine from energy drinks is absorbed within 20 minutes, and the liver responds to this by putting more sugar into the bloodstream. The problem is that caffeine elevates blood pressure and speeds up the heart rate, therefore, people with cardiovascular disease should avoid this type of drinks.

Another harmful ingredient that can be found in energy drinks is high fructose corn syrup, a processed sweetener produced from white cornstarch. This sweetener is strongly associated with type 2 diabetes mellitus, obesity, metabolic syndrome, and heart disease. Also, HFCS contains added toxins and chemicals which are damaging to the human body.

Moreover, energy drinks (like Red Bull) contain taurine, an amino acid which is important for the body.  Consuming this amino acid as a supplement can offset the natural nitrogen balance, according to the University of Utah Health Care Center.

Moreover, there is no nutritional need to consume energy drinks and many ingredients raise serious concerns regarding their adverse effects.

Note – due to their high caffeine content and other unhealthy ingredients, energy drinks are not recommended for children.

In conclusion, both these drinks contain caffeine, but coffee has considerably fewer side effects.

Ginseng has been shown to reduce stress and depression as well as it can increase blood flow due to its stimulating effects. Ginseng can be consumed as a tincture, capsule, or tea.

Vitamin B-12 is involved in the red blood cell production. These cells help carry oxygen throughout the human body, that also helps enhance energy levels.

Consuming enough water ensures that the energy from the food you eat will be utilized correctly through the day.

It is used to treat circulatory diseases and asthma. Moreover, Ginkgo biloba may boost overall well-being, focus, and even energy levels.