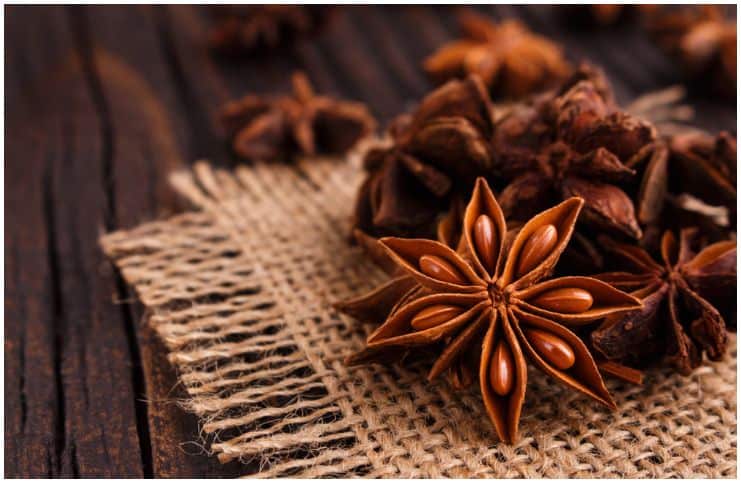 It is now cultivated in other countries in the South Asian continent, especially in Cambodia and Laos, but also in Japan and the Philippines.

As the name implies, it is a jewel of rare beauty between spices. It is the fruit of an evergreen tree, that reaches up to 8 meters tall and lives 100 years.

The fruit in the form of a star has five to ten corners (average of eight), and are in fact the pods containing the seeds. With thick, rusty peel, it reaches lengths of up to 3 cm.

The fruits are found whole or crushed, as reddish-brown powder. If they kept in tightly closed containers, away from air, light, and moisture, shelf life can be extended over a year.

It also contains phosphorus and calcium, however, in terms of its medicinal value and effects, perhaps its most important substance in this plant is called – shikimic acid, a potent plant-based substance which is the precursor to oseltamivir, an antiviral prescription drug which is sold under the name of Tamiflu.

Although it doesn’t resemble nor is related to anise, it shares the same name with it because they have a similar smell. However, it has a stronger, sharp, and deep flavor. Moreover, the chemical composition and the application area of the two plants are quite different.

While classic anise is used mainly for digestive, hormonal and respiratory disorders, it is used traditionally in addition to digestive diseases, also in cases of influenza, viral diseases, and cancer. Both plants are used as spices, but also as a medicine for millennia.

In this category of conditions, star anise seeds powder is almost unbeatable. The antiviral effect of this plant is due to a substance contained by its seeds, called shikimic acid, which once arrived in the liver, it transforms into a strong antiviral, which reaches the blood circulation.

Various types of cancer, used as a spice, along with turmeric and coriander, is an extraordinary prophylactic remedy against cancer.

Statistical studies have shown that populations of Southeast Asia, that use large amounts of this combination of spices, have a much lower rate of gastric, intestinal and lung cancer.

The anti-carcinogenic effect is due to the powerful anti-oxidants of the spice and the other spices, preventing cell mutations and the development of malignant tumors.

It is successfully treated in traditional Chinese medicine with a combination of Chinese anise, licorice (Glycyrrhiza glabra) and astragalus (Astragalus membranaceous).

The three plants are administered as a combination of powder, in equal proportions, taking 3-4 grams, three times a day on an empty stomach.

The mixture has a direct antiviral effect and it strongly activates the immune system and protects healthy liver cells from the spread of the infection.

The patient sits a few centimeters over the steaming cup with the nostrils, covering his head with a towel, so that the hot steam is fully inhaled. The soothing effect occurs immediately.

Other benefits and uses

A local massage with essential oil extracted from the seeds of Chinese anise, oil-based diluted and in a very small dose:

It has decorative purposes too, particularly in tropical climates, due to its fragrant leaves and small, scented flowers.

It is contraindicated in cases of hyperacid gastritis, gastric and duodenal ulcer, chronic and acute enterocolitis.