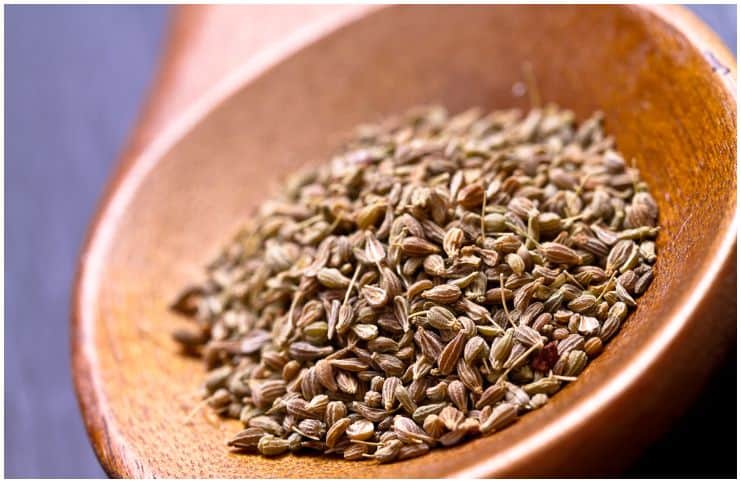 Anise is also known as aniseed, is an aromatic, herbaceous, annual plant, which belongs to the family Apiaceae. The plant has few leaves and the small and white flowers are arranged in the shape of an umbrella.

The fruits are small and green and can be harvested from late August to late September. It is a plant that prefers a warm climate. The fruits are used medicinally and, according to popular belief, they are considered and called seeds.

Their size is 3-5 mm, with an approximately oval shape, thinner at one pole, with a distinctive, pleasant and aromatic smell. The oil is used for flavoring various drugs and manufacturing aromatic spirits.

It originates from the eastern Mediterranean (Egypt, perhaps) or West Asia. Turkey is an important producer, but the best quality plants come from Spain.

This spice got the classical Latin name “anisum” because of its confusion with dill, which in Greek is called “aneson” or “aneton”, thus giving rise to the name of anise. In most European languages, anise name comes from the Latin “anisum”, with very few variations.

The form “anis” is valid for a large number of languages, including Norwegian, Croatian, Finnish, Russian, Ukrainian and Hebrew. Examples of names in other languages include: “anis” in Icelandic, “aniss” in Lithuanian, “anisz” in Hungarian, “anason” in Romanian, “yanason” in Arabic, “anisuan” in Urdu and “anisun” in Farsi.

The Sanskrit term “shatapushpa” means “a hundred flowers” and probably refers to the arrangement of anise flowers in the form of a cluster.

The Sanskrit name was used to name other related plants, some modern languages borrowing the Sanskrit term and giving it completely other meanings. For example, “thian-sattapusyat” is the name of anise fruits in Thai medicine, but in the southern Indian Telugu “shatapushpamu” means “dill”.

In low doses it acts as an expectorant, and in high doses as an antiseptic, stopping the fermentation processes in the large intestine.

It helps the normal functioning of the digestive system by:

It stimulates lactation in mothers who experience nursing problems. The combination of this plant and fenugreek naturally stimulates milk production, by their hormonal action, while improving its composition and nutritional qualities.

Moreover, some of the active ingredients of anise are transferred into the milk, fighting colic and gently stimulating the infant’s digestion.

It is administered three times a day, one teaspoon of powder from this plant and fenugreek combined.

Effective in treating diabetes – In a study conducted in 2011, 114 diabetic patients have been given daily a quantity of 5 grams of powdered anise, freshly ground.

During the 60 days of treatment, regular blood tests taken showed a gradual decrease of blood sugar levels, until at the end of the cure, when patients treated with this plant registered blood sugar levels 36% lower than patients from the control group, who had taken placebo remedies (false) during this time.

As a result of the treatment, researchers have noticed, in addition to the drastic decrease in blood sugar levels, lower levels of cholesterol, as well as a decrease in triglycerides values.

The study concludes that the seeds, consumed as powder, are a powerful anti-diabetic remedy, stabilizing and reducing blood sugar levels, further reducing the risk of cardiovascular complications of diabetes.

An experimental medical study showed that the administration of aqueous extract of anise has a relaxing effect on the bronchial tree, easing breathing and expectorating (excess mucus from the respiratory tract).

As an “emergency” remedy with immediate bronchial antispasmodic action, a cup of hot infusion of this plant is recommended, which promptly relaxes the smooth muscles of the bronchial tree, blocking the emergence or at least diminishing the intensity of an asthma attack.

As a long-term treatment, it is recommended to use a combination of powders of this plant, chamomile (Matricaria chamomilla) and heartsease (Viola tricolor), mixed in equal proportions, taking one teaspoon four times a day on an empty stomach.

A treatment with this combination of plants lasts 90 days and it should be done at least twice a year.

A study conducted in India showed that the seeds have a surprising effect on reducing addiction on morphine and other opioid drugs.

Volatile substances from the seeds act on the receptors in the brain responsible for pleasure and relaxation, thus becoming less sensitive to morphine. The essential oil from this plant was administered 6 drops twice a day.

In small doses, it activates breathing and tones the heart. In high doses, it causes inebriety, shivering, and convulsions.

Precautions and Side Effects

Patients predisposed to allergies should use it with caution.

Old fruits (over 3 years) or stored in unsuitable conditions (moisture) are not to be used because they become toxic.

Infusions are to be prepared every day, not stored until the next day.

This plant should not be used internally by pregnant women, patients with benign or malignant tumors (breast or genital), gastric and duodenal ulcer, colitis, or allergy.