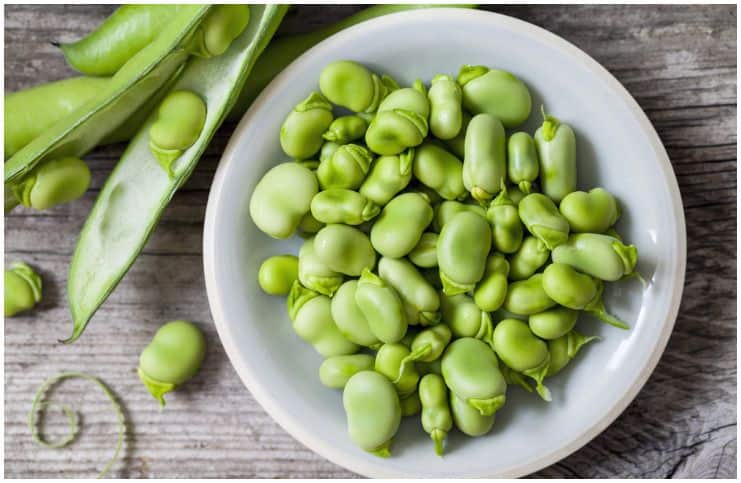 The fava bean or broad bean (scientific name Vicia faba) is a member of the Fabaceae family, the third-largest land plant family in terms of a number of species. Similar to edamame, Vicia faba is cultivated for its fruit.

The plant is a small annual herb with erect stems and pink-white flowers that grow to a height of up to six feet. It is popular in Mediterranean cuisine, with many summer dishes celebrating the seasonal bean, although they are also dried for winter use.

These beans have a long tradition of cultivation in Old World agriculture, being among the most ancient plants in cultivation and also among the easiest to grow.

Along with peas, lentils and chickpeas, they are considered to have become part of the Eastern Mediterranean diet around 6,000 BC or earlier.

Today, they are cultivated in more than 50 countries, with China accounting for a large fraction of world production.

Like all other legumes, the beans are high in fiber (providing 9 g per 1/4 cup) and protein. They also contain high amounts of minerals like copper, iron, phosphorus, selenium, zinc, manganese, magnesium and potassium, vitamins A, B1, B2, B5, B6, B9 (folate), C, E, and K.

They are good sources of B vitamins, which play an important role in the prevention of heart disease.

Researchers in Japan found that eating more foods containing B vitamins may reduce the risk of heart failure in men and lowers the risk of death from stroke and heart disease for women. (1)

In addition, these beans are rich in plant sterols and phytonutrients, which have been shown to have a direct correlation with health promotion and disease prevention.

Pregnant women need calcium and iron. Broad beans are good food that a woman can enjoy during lactation and pregnancy.

While the beans meet about 14 percent of iron, they are also known to render the adequate amount of Ca (calcium). Constipation experienced during pregnancy is also kept at bay as these beans are laden with soluble fiber.

Proteins are part of every cell, tissue, and organ in our bodies. They form the basis of living tissues and are coded for by our genes. Also, proteins are always in the process of being broken down and replaced.

One cup of beans contains 12.9 g of protein, which is 26% of the recommended daily value.

The major depressive disorder affects more than 18 million adults in the United States.

According to studies, the beans, packed richly with the amino acid dopamine, can do wonders in improving your mood and thus help in alleviating depressive conditions.

The amino acids phenylalanine, tyrosine, tryptophan, and methionine are helpful in treating depression.

These beans contain L-dopa, a precursor of neurochemicals in the brain such as dopamine, norepinephrine, and epinephrine. Dopamine in the brain is linked to the smooth functioning of body movements.

Thus, the consumption of adequate amounts of fava beans in the daily diet may help prevent Parkinson’s disease and dopamine-responsive dystonia disorders.

In a study by the Department of Neurology, Israel established that Vicia faba ingestion produces a substantial increase in L-dopa plasma levels. (2)

Copper is the 3rd most prevalent mineral within the physical body, however, it cannot be produced by the body itself and must be obtained through nutrition.

Furthermore, it is also known to help in the production of new cells and enhance your immune system. A deficiency in this mineral may lead to osteoporosis, an increased risk of infection, compromised growth, and impaired neurological function.

One cup of these beans contains 49 percent of the daily recommended value of copper.

Manganese, a trace mineral that is present in the human body in very small amounts, is an active component of the enzyme manganese superoxide dismutase, that is required for the proper absorption of nutrients, functioning of enzymes,  development of bones in the body, and wound healing.

One cup of these beans contains 31 percent of the daily recommended value of manganese.

A person is obese when their Body Mass Index (BMI) is higher than 30. These beans are a great weight-loss food as they are low in calories and fat, but high in dietary fiber.

One cup of boiled broad beans contains just 187 calories, but they provide 36 percent of your daily fiber requirement.

Raw fava beans contain the alkaloids – convicine and vicine, which can induce hemolytic anemia in patients with the hereditary condition glucose-6-phosphate dehydrogenase deficiency.

G6PD – Glucose-6-phosphate dehydrogenase is a cytoplasmic enzyme that is distributed in all cells.

The symptoms are vomiting,  bloody urine, dizziness, or even jaundice. This condition is called favism, occurring on the basis of a congenital defect and should be treated in time. Your physician can perform a blood test for G6PD to determine whether you are at risk.

Broad beans are rich in tyramine, hence they should be avoided by those taking monoamine oxidase inhibitors.

Also, the plant contains levodopa, which interferes with your body’s ability to metabolize vitamin B6. The high amounts of levodopa contained in these beans can result in a vitamin B6 deficiency.