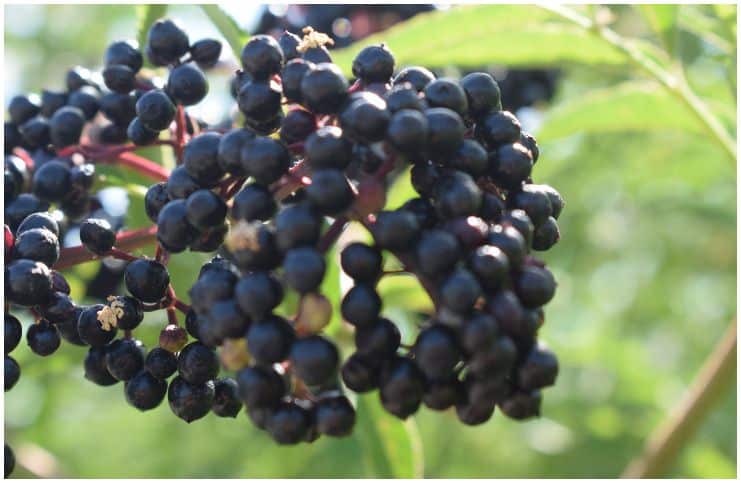 Sambucus ebulus (dwarf elder) is a medicinal plant used for centuries in the folk medicine of the Balkan Peninsula. It also

It is known as danewort (the name comes from the belief that it only grows on the sites of battles that involved the Danes), dane weed, European dwarf elder, walewort (foreigner plant), elderwort, dwarf elderberry, and blood hilder.

It is a herbaceous species of elder, native to central and southern Europe and southwest Asia, belonging to the Adoxaceae family (comprising about 150-200 species and 4 genera).

The species is also reportedly naturalized in parts of North America (New Jersey, New York, and Québec). In the U.S., the name of dwarf elder is given to an entirely different

The species is also reportedly naturalized in parts of North America (New Jersey, New York, and Québec). In the U.S., the name of dwarf elder is given to an entirely different plant, viz. Aralia hispida (N.O. Araliaceae).

Traces of a cyanogenic glucoside, sambunigrin and the triterpenes alpha- and beta-amyrin were isolated from roots, leaves, and fruits.

Note – an early description of its therapeutic use in people could be found in ”Naturalis Historia by Pliny the Elder.”

Dwarf elder preparations have shown anti-neoplastic, anti-inflammatory and antimicrobial properties, anti-cancer, anti-ulcerogenic and antioxidant activities. A blue dye and ink are obtained from this medicinal plant.

In addition, this medicinal plant has been used for a long time for treating inflammation-related gastrointestinal disorders, lung and kidney diseases, infections, fever, influenza, and rheumatoid arthritis, as well as of wounds, insect and snake bites.

S. ebulus fruits have been used in the traditional Austrian medicine for treating disorders of the respiratory tract and fever. In Iranian traditional medicine and ancient oriental medicine, the plant is used to treat arthritis, and nettle and bee stings, as well as sore throats.

More importantly, the leaves of this medicinal plant can be placed on scalds and burns to help heal them and can also be made into a warm or hot poultice for swellings and sprains.

In Bulgaria and in other Balkan countries, there is the frequent use of traditional medicine along with the consumption of syrups, tea, and jams in everyday life. The root, which is fleshy and white, has a nauseous, bitter taste.

Its decoction is a drastic purgative and it cures the bites of mad dogs and adders. Juice from the root is used to dye hair black, in some parts of the world, and a blue dye and ink may be obtained from the berries.

Using this plant in large amounts can cause bloody diarrhea, vomiting, dizziness, and headache. It can also cause unconsciousness, breathing problems, and death. The fruit of S. ebulus has been known to cause stomach upsets to some people.

But, any toxin the fruit might contain is liable to be of very low toxicity and is destroyed when the herb is cooked. Never take any medicinal herbs without first checking with your doctor!