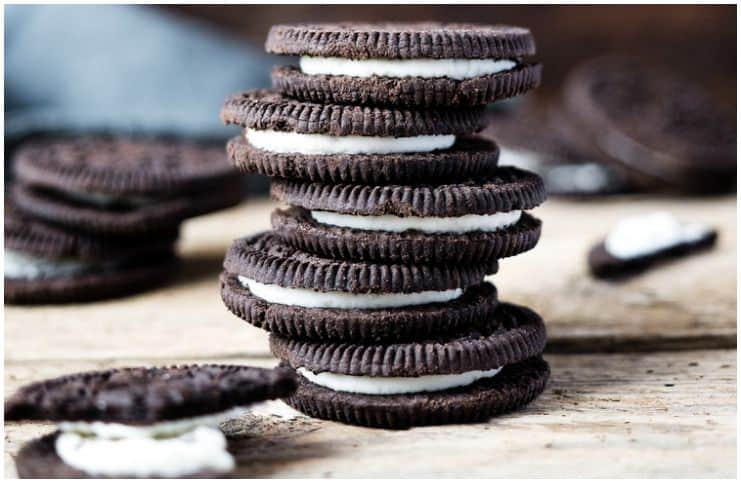 It is a commercial brand of cookie introduced in 1912 and consists of two chocolate wafers with a sweet creme filling in between.

At first, it was sold in a yellow tin with a glass cover for about 30 cents a pound (approximately $7.13 in the present day). The current design has been around since 1952, but today’s size is in between the smallest and the largest versions.

This cookie was first developed and made by the National Biscuit Company (currently known as Nabisco) in the current-day Chelsea Market complex.

The origin of this cookie is shrouded in mystery, but some people believe that its name derives from the Greek word for ”hill,” since an early version of this cookie was having a dome-shaped.

Still, others consider that the name of the cookie is a combination of taking the “re” from “cream” and putting it between the two “o” in “chocolate,” resulting in “o-re-o.” Furthermore, some say it comes from the French word for gold, “or,” due to its initial packaging which was mostly gold.

Every year, around 40 billion cookies are being produced. All these cookies stacked on top of one another would circle the earth five times. According to the data, 20.5 million cookies are eaten in the United States every year with more than $2 billion in global annual revenues in 2016.

It is now produced in 21 bakeries around the world, in 18 countries, and is sold in about 100 countries.

SEE ALSO:  25 Interesting Facts About The Gallbladder and Gallstones

The US, Venezuela, China, Indonesia, and Canada are the top 5 countries regarding sales. For instance, in some countries, such as – China, Kraft Foods (the current owner) reformulated the recipe to appeal to the local consumers.

There are other flavors that can be found on the market, including – candy corn, banana + dulce de leche, green tea ice cream, gingerbread, ice cream rainbow sure, or orange ice cream.

No, this cookie is not appropriate for vegans, but it can be considered good for vegetarians.

It is the brand name for a creme-filled chocolate sandwich cookie made by Leaf Brands. This brand originally debuted on January 1, 1908, and was manufactured by Sunshine Biscuits for about 90 years.

Sunshine Biscuits was a company run by John H. Wiles and Joseph and Jacob Loose, and it was originally part of a great bakery conglomeration.

In 1996, Sunshine Biscuits was acquired by Keebler®, but its marketing department discovered that consumers didn’t like the cookie’s name.

Therefore, in 1999, Keebler® replaced this brand with a reformulated cookie, called – Droxies®. In 2001, Keebler Company was purchased by Kellogg’s®, which, in 2003, removed Droxies® from the market. However, in 2008, they revived the original brand name in celebration of the cookie’s 100th anniversary.

SEE ALSO:  Orabase vs Orajel – Which Is Better For Canker Sores & Toothache?

In the present day, the cookie is distributed under the Sunshine label and with a slightly different recipe from the original.

Verdict – Oreo vs Hydrox – Which Is Worse For Your Health?

After Hydrox changed its recipe in 2008, it has fewer ingredients with known side effects for human health than Oreo. Here are just a few:

High fructose corn syrup, also known as isoglucose or glucose-fructose syrup, is a liquid sweetener used in the manufacturing process of many beverages and foods. HFCS is composed of different simple sugars, mainly fructose and glucose, with varying compositions.

According to research, long-term use of HFCS can lead to type 2 diabetes mellitus, obesity, high LDL and total cholesterol, tooth decay, and an increased risk for heart attacks and heart disease.

It is a synthetic alternative for pure vanilla extract, created synthetically with petrochemicals or produced from the byproducts of wood pulp. Unfortunately, since it is cheap to produce, vanillin is everywhere. For instance, you can find it in – beverages, prescription medicines, and cookies.

Possible short-term side effects of consuming foods and drinks containing vanillin include – an allergic reaction (itchy eyes, a rash, trouble breathing, a runny nose, diarrhea, and nausea), mild headaches, and can lead to addiction.

SEE ALSO:  Rozerem vs Melatonin – Comparison of Uses & Side Effects

It is grown on large plantations in tropical places such as Malaysia and Indonesia and is produced from the fruit of the palm oil tree. Each tablespoon contains about 7g of saturated fat, which is almost 5 percent of the daily limit on a 2,000-calorie diet. Also, repeatedly reheating the palm oil decreases its antioxidant capacity and may lead to heart disease.

READ THIS NEXT: Mars Bar vs Milky Way