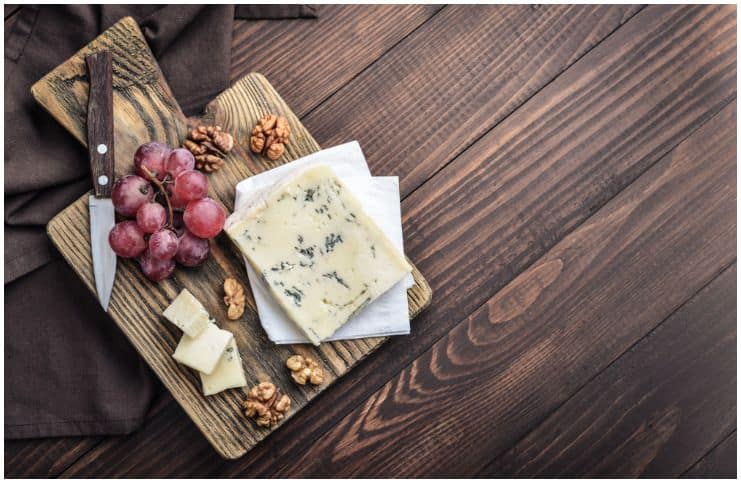 It is commonly produced from unskimmed cow’s milk and Penicillium mold. It can be firm or buttery, quite salty and crumbly, “bite” from its blue veining, and an ivory-colored interior.

When produced from goat’s milk, the cheese is more firm, crisp, and salty. It is made in various sizes. The diameter is between 20 and 32 cm and the minimum height is 13 cm.

It is generally believed that blue mold is “injected” into it, however, it is the introduction of air during the aging process which actually leads to the blue veining to occur.

It is mainly produced in the northern Italian regions of Piedmont and Lombardy. People in this area began to make cheese to conserve all the extra milk, as the locals had an overwhelming number of cows in the area.

In the present day, it is sold in blue-and-white wrapping with a big “G” on the aluminum foil which protects the cheese on it and is produced exclusively in about 3,000 farms scattered across the land between Lombardy and Piedmont.

Note – the label of origin branded on the cheese wheel guarantees the authenticity and quality of the product.

It is also known as Blue Vein cheese and is a type of cheese that has been treated with the mold Penicillium.

This mold feeds on the proteins in milk and excels in low oxygen environments, making them thrive in the small holes and cracks created when the cheese is skewered.

These penicillin molds are harmless to human health since in cheese making process the molds which grow on cheese do not produce mycotoxins which can occur in other foods.

Some types of cheeses have spores mixed in with the curds after they form and others are injected with spores before the curds form. During half a year of ripening, the mold grows both in irregular, small, machine-made perforations and natural openings in the cheese.

This type of cheese is known as blue cheese since the blue veins type strips appear on the surface of the cheese.

The history of this kind of cheese goes back to the seventh century, to a cave outside the village of Roquefort, France. Legend has it that it has been invented by accident when a drunken cheesemaker left behind a loaf of bread in a moist cheese cave. When the drunk cheese maker returned, he discovered that the mold covering the bread had transformed it into a blue cheese.

Most types of these cheeses are produced from cow’s milk, however, for example, Roquefort is made from the milk of the ewe. Also, it is acknowledged that Danish cheese ”blueness” is brought about by Penicillium roqueforti and it is made by having copper wires inserted through the cheese as it matures.

Other types of cheeses in this category is Blue Stilton (the most famous English version of this cheese), Point Reyes Blue (won Best Cheese/Dairy Product at the 2011 Fancy Food Show), Spanish Cabrales (produced by rural dairy farmers in Asturias, Spain), and Irish Cashel Blue (made by hand on an about 200-acre farm in Co. Tipperary, Ireland).

Verdict – Gorgonzola vs Bleu Cheese – Which Is Worse For Your Health?

Both these kinds of cheese should be avoided since they pose serious side effects to human health, including:

Some people are lactose intolerant (around 65% of the human population), meaning that they cannot digest the lactose (sugar) found in milk and milk products.

Thus, intake of lactose leads to a variety of symptoms, such as – cramps, abdominal bloating, nausea, diarrhea, gas, usually one hour after eating or drinking the dairy product.

Note – due to the presence of lactic acid bacteria and the production method, gorgonzola cheese is virtually lactose-free and may be good for lactose-intolerant sufferers.

A casein allergy happens when the human body’s immune system thinks that casein (the main protein found in dairy products) is harmful and produces IgE antibodies for protection.

Also, this protein has been strongly associated with adverse effects in children with ADD, autism, and ADHD.

Usually, cheeses are full of sodium. Sodium is an essential mineral for human health, but, in the present day, it is consumed in excess.

A regular intake of dairy products increases considerably the amount of this mineral an individual eats notably. The main problem with the overconsumption of sodium is hypertension that may lead to heart disease or stroke.

Note – having a diet rich in potassium can reduce the adverse effects of too much sodium intake.

Moreover, eating foods that contain saturated fat promotes inflammation in the body, which can increase your chance of a variety of diseases.

SEE ALSO:  Baclofen vs Soma – Comparison of Uses & Side Effects

Dairy products contain estrogen and other steroid hormones which could potentially increase the risk of some types of cancer as well as disrupt the endocrine system.

READ THIS NEXT: Cheez-It vs Cheese Nips