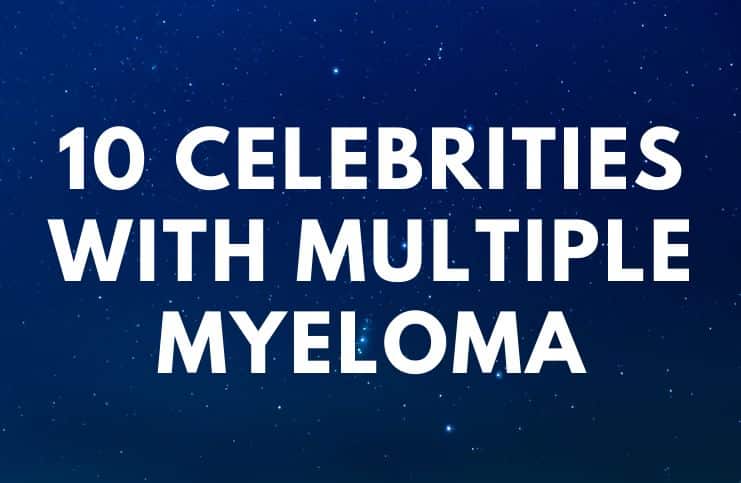 Multiple myeloma (MM), also referred to as Kahler’s disease, is a type of cancer of the plasma cells (a type of white blood cells which are responsible for recognizing foreign infections and producing antibodies) of the bone marrow.

It is an incurable hematologic malignancy that is linked with high disease burden and relapse rates.

Although the exact cause of MM is unknown, doctors suspect there may be a variety of causes which may include:

MM symptoms may develop slowly over time and they can include:

Note – occasionally, MM may not cause any symptoms. This is called smoldering multiple myeloma and it can remain in this mode for 10 or even 20 years.

A few factors increase your risk of developing MM, including:

SEE ALSO:  Famotidine vs Ranitidine – Which Is Better For Heartburn Relief?

This type of cancer is diagnosed with the following tests:

Here Is A List Of 10 Celebrities With Multiple Myeloma:

He was an American physicist who suggested a form of interstellar propulsion based on the principle of the ramjet.

He was an American actor and amateur boxer who gained fame for his roles in The Seven-Ups, The French Connection, Jaws, Marathon Man, and 2001: A Space Odyssey.

He is an American author and television journalist who is best known for being the anchor and managing editor of NBC Nightly News. Currently, Tom serves as a Special Correspondent for NBC News.

In August 2013, Tom Brokaw was diagnosed with MM at the Mayo Clinic.

He was an American actor who is best known for his role in the soap opera ”Dallas,” a role that continued until he was too ill to perform.

Jim died from MM at his home in Northridge, California.

She was an American actress who is best known for her role in the television series Benson as well as in Guiding Light.

He was an American entrepreneur and businessman who is best known for founding Sam’s Club and Walmart. At one point in his life, Sam Walton was the richest man in the United States.

She was an English film, stage, and television actress who won the best actress award for Images at the 1972 Cannes Film Festival.

In 2010, Susannah was diagnosed with cancer but refused chemotherapy. On January 15, 2011, York died at the Royal Marsden Hospital in London from MM.

“The blue-eyed English rose with the china-white skin and cupid lips who epitomized the sensuality of the swinging Sixties” – an obituary in The Telegraph.

He was an American actor who won an Emmy Award in 1996 for a role in the science-fiction drama The X-Files.

Peter died on December 12, 2006, at the age of 71, at New York-Presbyterian Hospital in NYC after suffering from heart disease and MM.

He was a professional American football wide receiver in the NFL who played for the New York Giants. Stacy also died due to MM.

He was an English playwright, who wrote over 150 screenplays, including original feature films, TV plays, and adaptations.