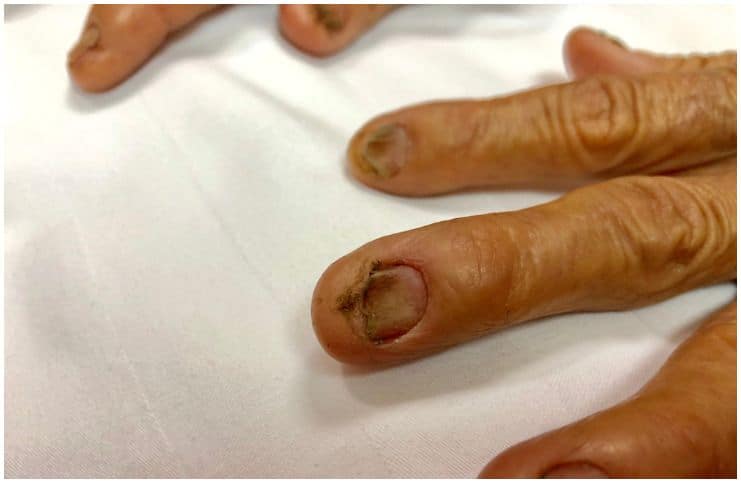 Koilonychia, also called spoon nails, is a dystrophy of the fingernails in which they are thinned and concave with raised edges.

Koilonychia (the word is derived from Greek and literally translates as – hollow nail) affects everything including the shape, color, texture, and the thickness of the fingernails and the toenails.

It is usually caused by the inability to absorb iron in the bloodstream, a common disorder called iron anemia. Furthermore, some infants are born with this problem, however, they eventually grow out of it.

It is also a component of the nail-patella syndrome, also known as HOOD syndrome, a genetic disease characterized by various abnormalities including kidney and musculoskeletal abnormalities.

Iron deficiency – it is the most common cause of spoon nails.

Nails polish – exposure of the person’s nails to nail polish or moisture that may lead to the peeling of the nail’s edges and brittle nails.

Lupus disease – it is a chronic autoimmune disease that occurs when the body’s immune system attacks its own organs and tissues. Most people with this autoimmune disease have mild disease characterized by severe episodes when symptoms get worse for a while, followed by periods of remission. Any part of the human body can be affected by this condition as it has numerous clinical manifestations affecting the joints, skin, lungs, brain, blood vessels, kidneys, and other internal organs.

Thyroid dysfunction – thyroid disorders are conditions that affect the thyroid gland, a small, butterfly-shaped gland located just below Adam’s apple. Although the effects can be uncomfortable or unpleasant, most thyroid problems can be managed well if correctly treated.

Hemochromatosis – this condition causes the human body to absorb too much iron from food. The extra iron can damage your organs. Without proper treatment, hemochromatosis can cause your organs to fail. This disorder is the most common cause of severe iron overload and the most frequent autosomal recessive genetic disorder.

Nail-patella syndrome – it is characterized by abnormalities of the knees, nails, pelvis, and elbows. Nearly all patients with this syndrome will have missing or abnormal nails, that is commonly apparent at birth.

Raynaud’s disease – it is a common condition that affects the blood supply to certain parts of the body – often the toes and fingers. Symptoms of Raynaud’s disease depend on the frequency, severity, and duration of the blood-vessel spasm.

Chemicals – frequent exposure to solutions which are petroleum-based detergents and soaps may contribute to the onset of this condition.

Nail-biting – a habit of pinching or biting the nails can take a toll on the nail’s health and causes this problem.

Genetics – there is also hereditary koilonychia, which commonly affects the center of the nail. This type is rare and is usually a sign of kidney issues.

The first indicators of this condition can be identified through a physical examination by a health care specialist – the concave nails are frequently an important sign of the condition.

After, the doctor will evaluate the nail and get the patient’s history to determine the actual cause of this disorder. He can also diagnose mild cases of spoon nails by testing to see whether the concave indention on the nail plate is capable of retaining a drop of water.

SEE ALSO:  10 Essential Oils For Swollen Lymph Nodes In The Neck, Armpit, and Behind The Ears

Note – the doctor must be aware of the potential systemic and cutaneous associations with this condition in order to guide appropriate treatment, workup, and referral.

To get rid of this condition permanently, the most important aspect is to be 100% sure that you’re treating the root cause, which is usually iron anemia.

Medically, nail-biting is known as onychophagia, and approximately 20 to 30% of the general population engages in chronic nail-biting. Interestingly, many people are not even aware of the fact that they are biting their nails. Nevertheless, if you bite your hangnails, infections can grow under the nail bed. Also, you can permanently damage your gums, your nails, and your teeth.

Avoid contact with various chemicals present in soaps and washing powders by wearing gloves before handling them.

Iron deficiency anemia (IDA) is the most frequent type of anemia, and it occurs when the human body doesn’t have enough quantity of this essential mineral. In the US, about 20% of black and Mexican-American women and close to 10% of non-Hispanic white women have IDA.

Without enough iron, the human body can’t produce enough hemoglobin, a substance in red blood cells that enables them to carry oxygen. Signs and symptoms of IDA include – pale skin, weakness, shortness of breath, chest pain, cold feet and hands, dizziness, headache, brittle nails, or inflammation of the tongue.

The human body is considerably better at moderating the absorption of non-heme iron. Heme iron can bypass the body’s attempts to control iron absorption. Since the body has no method of eliminating excess iron from the body, this gives non-heme iron a notable advantage over heme iron.

According to the American Dietetic Association, vitamin C and other organic acids in vegetables, legumes, and fruits enhance the absorption rate of non-heme iron.

Never mix foods rich in iron with beverages, such as – coffee, sodas, energy drinks, or tea that are known to stop iron absorption. For instance, a 2000 study conducted at the Unilever Research Vlaardingen, The Netherlands, established that consuming drinks containing caffeine one hour before a meal is fine, but not one hour after.

Even though eggs contain this essential mineral, they also contain phosvitin, a type of phosphoprotein that can block the absorption of iron by up to 28%.

READ THIS NEXT: Pro And Cons Of Being A Vegetarian