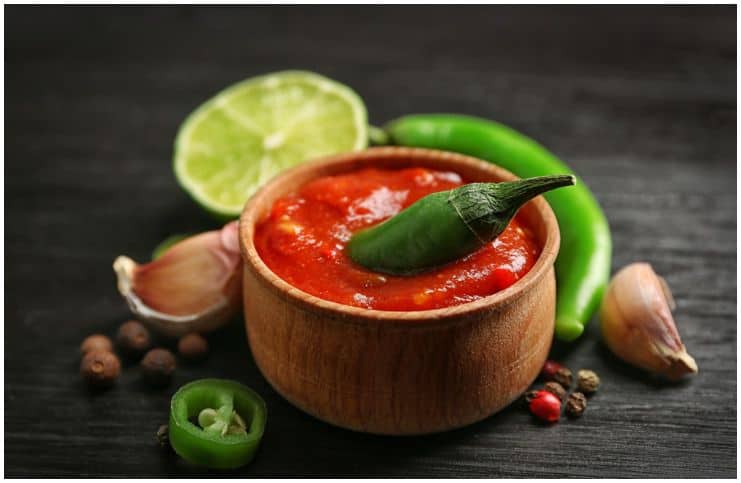 It is one of the few Mexican hot sauces to achieve cult status in the United States. It is produced in the city of Chapala, Mexico’s state of Jalisco.

Its special blend of pequin peppers, chile de àrbol peppers, and spices results in a unique aroma and flavor.

This sauce contains capsaicin, a pain reliever that reduces the symptoms of indigestion and aids in digestion, according to the University of Maryland Medical Center.

In a 2009 study that was published in the ”Clinical Nutrition,” scientists established that when healthy study participants consumed a combination of green tea and capsaicin, they tended to take in fewer calories and feel less hungry.

Capsaicin also lowers the levels of LDL cholesterol that constricts blood flow to the heart since it accumulates on artery walls.

Used topically, ointments or creams containing this active ingredient can be beneficial in relieving pain from numerous conditions, such as – arthritis (a condition which causes pain in the joints and the tissues surrounding the joints), nerve pain, lower back pain, and fibromyalgia.

People with diets high in capsaicin have a lower risk of developing obesity since this active ingredient increases the rate of fat burning, according to a 2014 issue of “Progress in Drug Research.”

Moreover, a 2015 study that was presented at the Biophysical Society’s Annual Meeting concluded that regular intake of chili pepper could be effective in weight loss by way of thermogenesis, the process of heat production in organisms.

This hot sauce has a good amount of sodium (110mg per tsp). Too much sodium in the diet can lead to hypertension (also known as high blood pressure). According to new statistics from the American Heart Association, over 103 million Americans have hypertension.

Even in the absence of increased blood pressure, excess intake of sodium can negatively affect the heart, blood vessels, and kidneys, according to a review article in the Journal of the American College of Cardiology.

People over 65 years old with normal brain function are at higher risk of cognitive decline if they are on a high sodium diet, as per a 2011 Canadian study on 1,200 older sedentary adults.

Xanthan gum is a food additive that is produced from lactose, glucose, or sucrose when fermented by Xanthomonas campestris – a type of bacteria. The US Food and Drug Administration considers xanthan gum safe for consumption as a food additive.

However, some people can experience side effects when consuming foods with this food additive, such as:

Note – an increased exposure can make the symptoms worse.

It is a hot sauce that is made exclusively by aging special peppers in wood oak barrels. It is manufactured by McIlhenny Company of Avery Island, Louisiana.

The recipe was initially created by Edmund McIlhenny and has been used by the McIlhenny family for about 150 years. This hot sauce has a Scoville rating of between 2,500 and 5,000 SHUs.

May Help You To Live Longer

Scientists from Harvard evaluated the health and diet information of approximately 500,000 people in China from 2004 to 2008 and concluded that eating spicy food daily can give you a 14 percent chance of living longer than people who don’t.

Regularly eating hot sauces might help to reduce pain as you release endorphins which block the pain from the heat. This is the main reason why hot peppers are used to help treat neuropathic and arthritis pain, says Beth Warren, the author of Living Real Life with Real Food.

Tabasco peppers are a storehouse of vitamin C, a potent antioxidant that eliminates cancer-causing free radicals in the human body and helps the body to develop a good resistance against many types of agents.

Studies of the National Institutes of Health have established that a regular intake of foods that are high in vitamin C may boost chemotherapy’s effect on cancer cells, particularly in pancreatic cancer.

Vitamin C might also reduce your risk of melanoma (a type of skin cancer that can spread to other organs in the human body), as per a 2014 study published in the International Journal for Vitamin and Nutrition Research.

Hot sauce boosts the body’s metabolism for hours after you eat it. Hence, eating hot sauces or hot peppers regularly can help you lose unnecessary weight as well as it can help in the prevention of obesity.

According to some studies, spicy food can negatively affect taste buds. In addition, there is research which established that eating spicy food on a daily basis might increase the risk of throat and stomach cancer.

Additionally, when consumed incorrectly (like accidentally inhaling hot sauce), your nose can experience redness and discomfort.

Note – the higher the Scoville heat unit of a hot sauce, the more likely you are to experience side effects.

Cholula Hot Sauce is one of the few Mexican hot sauces which are popular in the United States. The two main ingredients of this hot sauce are pequin peppers and árbol peppers. It is made in Chapala, Mexico, from a recipe handed down for 3 generations of the Harrison family.

Tabasco hot sauce has been around since 1868 and is most likely the best-known American hot sauce. It is made from Tabasco peppers, vinegar, and salt.