It is a collection of blood under the toenail or fingernail. This typically happens due to a traumatic injury as in stubbing a toe or hitting the thumb with a hammer. It may be simple or accompanied by substantial injuries to the nail fold and digit.

This condition can be extremely painful for an injury of its size since bleeding from the rich vascular nail bed leads to an increased pressure under the nail. However, it is not a serious medical condition unless the nail bed is damaged or if there are broken bones.

If the pain becomes intolerable, a doctor will puncture a small hole in the nail in order to let the blood drain. After this procedure, relief from the pressure is immediate.

These injuries can happen easily, especially if you:

If the injury is severe, and a considerable amount of blood collects under the nail, pressure may build and you may experience severe pain. 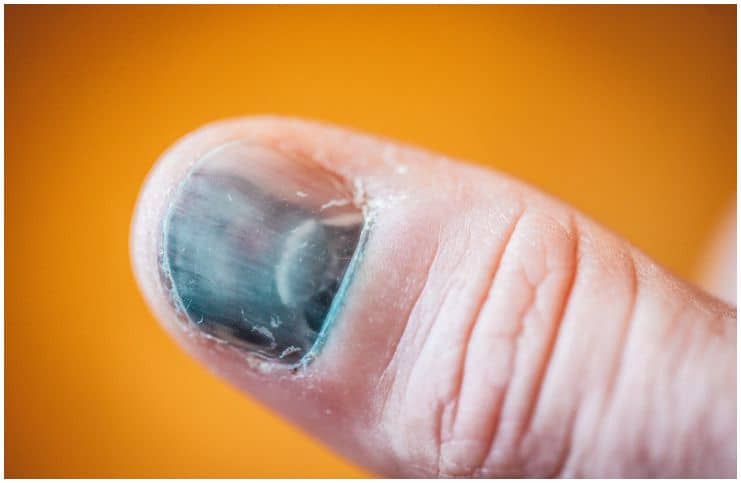 If it is smaller than 25 percent of the nail, it is recommended to leave it to resolve spontaneously.

To relieve the throbbing pain, you can keep the digit elevated by raising the leg or arm with the affected nail. Moreover, you may apply a pack of ice a few times per day for up to 20 minutes. Also, nonsteroidal anti-inflammatory drugs help decrease swelling and pain. 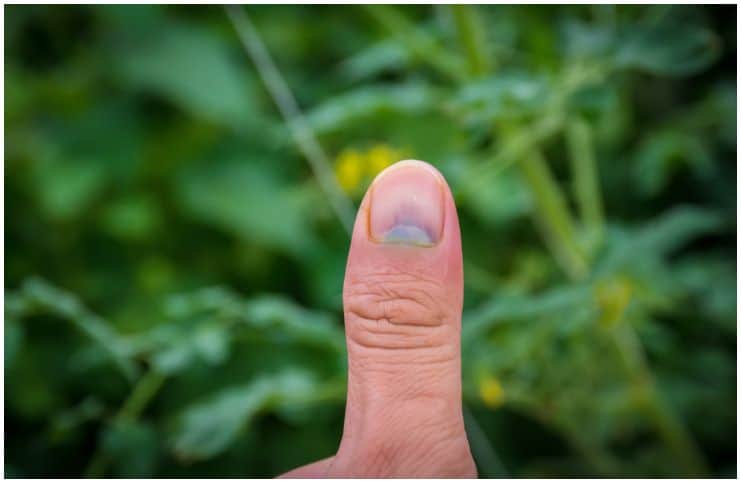 SEE ALSO:  Wellbutrin vs Zoloft - Which Is Better For Anxiety?

It the hematoma covers 25 percent or more of the nail, it needs to be treated by drilling a hole through the nail into the hematoma.

If the hematoma covers more than 50 percent of the total nail surface, a doctor may require removing the entire nail and adding stitches to the affected nail bed.

After this treatment, a follow-up process is recommended where antibiotics are administered if necessary, and healing is monitored.

Melanoma is a type of cancer that develops from melanocytes.

These are the cells that produce melanin, the natural pigment which gives skin its color. An estimated 50,000 new cases of skin cancer are diagnosed in the US every year.

This type of melanoma is considered to be a variant of other types of cancer, like – nodular melanoma, desmoplastic melanoma (the malignant cells are surrounded by fibrous tissue), or acral lentiginous melanoma (a form of cancer which affects the soles of the feet and the palms of the hands).

This is a very rare type of cancer and generally occurs on the thumb or big toe under the nail, however, it can affect any nail on the foot. Moreover, it can happen on any of the fingernails.

It is typically observed in middle-aged adults and seniors as well as in deeply pigmented individuals, particularly among the African-American and Asians descents.

Karolina Jasko, former Miss Illinois, had been getting acrylic nails (also known as fake nails) applied once per month on top of her real nails which were cured with UV light.

In December 2016, during an appointment, Jasko saw a black line on her thumbnail, however, she brushed it off as a bruise. She said:

“A few days later, an infection occurred on that very thumb which caused me to return to the nail salon to get my acrylic removed.”

Karolina was diagnosed with subungual melanoma. During an interview, Jasko declared:

“I went to see my primary care physician who referred me to a dermatologist right away because he told me it was a sign of melanoma.”

Jasko went on to say:

“He didn’t want me to take this lightly.”

She eventually had her nail removed. Karolina said:

“They still don’t know where the infection came from.”

”They said that was like a sign from God… because if I would have waited longer and not come in with that, it could have been possible the melanoma would have spread.”

People at higher risk include:

Note – it not caused by sun exposure.

It’s important to learn the signs and symptoms of this condition, so you can get help before it spreads.

SEE ALSO:  Faslodex vs Tamoxifen - Comparison of Side Effects & Uses

Signs usually include darkened streaks that run perpendicular to the cuticle. About fifty percent of these streaks are non-pigmented, while the other half is blue, brown or black.

Moreover, as time passes, papules may form at the edge of the nail border and turn to plaques. Also, in advanced stages, ulceration occurs.

Usually, this type of cancer does not cause pain, but sometimes, especially if the tumor spreads to the underlying bones and tissues, it can cause severe pain. The problem is that chemotherapy is not effective, plus, it has plenty of side effects, including:

The main option to treat this condition is surgery, which is usually conducted for the entire tumor expurgation.

If the skin cancer has spread to close lymph nodes (major sites of B and T lymphocytes), another surgery may be required to remove them. However, chemotherapy can also be used for more advanced illness.

The most important difference between these two conditions consists in the fact that subungual hematoma is not a serious condition (but possibly quite painful) and will gradually clear as the nail heals.

On the other hand, subungual melanoma is a severe illness that must be treated as fast as possible. The problem is that its diagnosis can be masked by other factors like – fungal infection, hematomas, or injury.