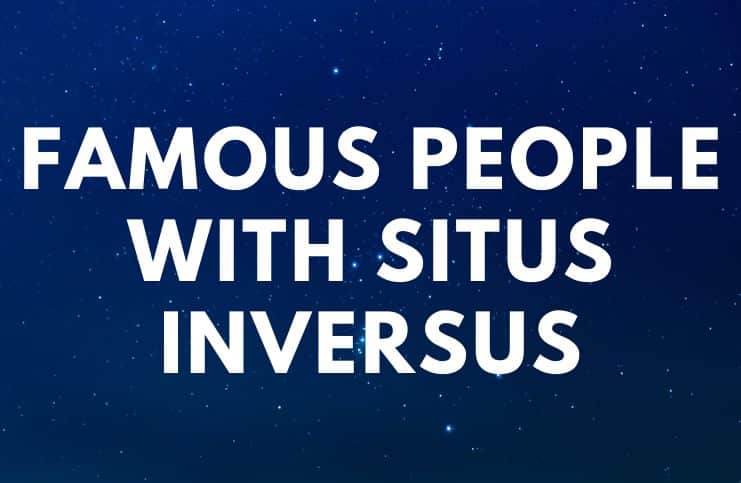 Situs inversus is a genetic condition in which the organs in the abdomen and chest are positioned in a mirror image from their normal positions.

The condition can occur as part of a syndrome with various other defects or it can occur alone (with no other conditions or abnormalities).

According to the U.S. National Library of Medicine, an estimated 1 out of every 10,000 people has a genetic condition.

Most people with this genetic condition have no medical complications or symptoms resulting from it.

The exact cause of the condition has not yet been determined. But, around 25 percent of individuals with the genetic condition have Kartagener’s Syndrome – a rare hereditary disease that is caused by a mutation that can occur on a variety of genes. Some of its symptoms include:

Situs inversus is commonly picked up when a healthcare professional hears normal heart sounds on the right side of the body.

When the disorder is associated with another condition, treatment may depend on the symptoms and signs present in the affected individual. In isolated situs inversus, there is usually no need for treatment.

The prognosis for a person with situs inversus is good. Plus, life expectancy is normal.

Here Is A List Of 5 Famous People With Situs Inversus:

He is the Director of the Ashtanga Yoga Center in Carlsbad, California. Tim has been teaching and studying Ashtanga Yoga for over three decades. He was actually the first American certified to teach yoga by the Pattabhi Jois at the Ashtanga Yoga Research Institute in Mysore, India.

“My goal as a teacher is to inspire a passion for practice. The practice itself, done consistently and accurately, is the real teacher,” Tim says.

Yoga Journal considers Tim one of the 10 influential yoga teachers who have shaped yoga in America. Also, the New York Times refers to Miller as “one of the first Ashtanga teachers in the United States.”

He is an American basketball player in the NBA who was selected seventh overall in the 2006 NBA Draft by the Minnesota Timberwolves.

Randy believes that he is the only player in major American sports with this genetic condition. At the age of 9, he discovered that he had the condition when he was taken to the hospital after catching the flu while playing football.

Randy Foye has suffered no discernible complications due to situs inversus. Furthermore, as all his organs are in reverse, the disorder is not expected to jeopardize his career as a professional athlete. If only a few of his organs had swapped, this could have caused severe disability or death.

Also, Foye has appeared on a PBS documentary ”9 Months That Made You” that premiered June 29, 2016, discussing his genetic condition.

SEE ALSO:  Mupirocin vs Neosporin - Which Is Better To Treat Skin Infections?

Moreover, Randy featured on a 2015 BBC series called ”Countdown to Life” which explains how his genetic disorder was caused. The show stated he was lucky to be alive since his organs are a perfect mirror image of the normal system of human organs.

He is an American musician, singer, former teen idol, and actor who started his career at the age of 5 performing with his brothers on The Andy Williams Show.

Osmond’s first appearance on TV’s The Andy Williams Show was on December 10, 1963, one day after his 6th birthday.

For more than four decades, Donny Osmond and his younger sister Marie have gained fame as Donny & Marie, most likely due to the success of their 1976–79 self-titled variety series, that aired on ABC and a string of gold records.

In addition, he won season 9 of Dancing With the Stars with partner Kym Johnson. Also, Donny has hosted a syndicated radio show Versions of the Donny Osmond Show and has worked as a radio host.

Donny Osmond has situs inversus and his appendicitis nearly went undiagnosed because his healthcare provider didn’t expect his appendix to be on the left.

She is a Canadian writer, actress, and comedian who started her comedy career in 1974 as a cast member of The Second City. Her acting mentor was comedian Gilda Radner.

Moreover, Catherine voiced many characters in animated films, like Monster House, Chicken Little, and The Nightmare Before Christmas.

SEE ALSO:  Nexplanon vs Depo-Provera - Comparison of Side Effects & Benefits

In June 2007, she received a star on Canada’s Walk of Fame. Additionally, O’Hara has received numerous awards, including a Gemini, Emmy, and Genie.

He is a Spanish songwriter, actor, singer, and record producer.

In 1995, Iglesias released his self-titled debut album that proved to be a huge success. His 2nd album ”Vivir” came out in 1997. Three singles (‘Solo en Ti’, ‘Enamorado Por Primera Vez’, and ‘Miente’) from the album have reached the top of the Latin charts.

In 1998, his 3rd album ‘Cosas Del Amor’ was released. In 2001, his fourth album released was entitled ‘Escape.’ It is his most successful album to date.

Iglesias has sold over 170 million records (singles and albums combined) worldwide, making him one of the best-selling artists ever. He also has more than 70 No. 1 rankings on the various Billboard charts. In addition, he toured 16 countries and gave 50 sold-out shows for the ”One-Night Stand World Tour.”

Moreover, he has won more than 200 awards from various ceremonies, including:

Enrique Iglesias has situs inversus. Luckily, he has no medical complications due to the condition.