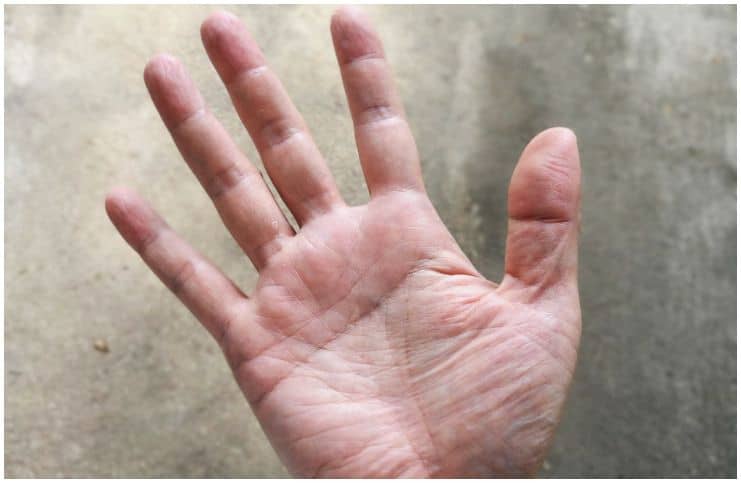 Human hands develop palmar creases in the womb close to the 12th week of gestation. The palm typically has 2 of these creases. However, occasionally, the horizontal creases join together to form a single transverse palmar crease (STPC).

An STPC used to be called a simian crease, however, the term is no longer considered appropriate.

Downsides of the simian line include:

Advantages of the simian line include:

According to data, complete simian lines on at least one hand are more common in men than women and occur in:

According to the National Institute of Health, a single transverse palmar crease can help your healthcare provider to identify a number of disorders, such as:

Note – a healthcare professional, however, takes a few other factors into account before making a diagnosis.

Here Is A List Of 10 Famous People With Simian Lines:

In May of 2018, Meghan became the Duchess of Sussex through her marriage to Prince Harry. She is also an actress and model who, after holding case #24 on the game show Deal or No Deal in 2011, was introduced to television audiences as Rachel Zane on USA’s Suits.

SEE ALSO:  Briviact vs Keppra For Seizures – Differences & Side Effects

According to Johnny Fincham, chirologist to the stars and author of The Spellbinding Power of Palmistry, Meghan Markle has a simian line on her hand.

He is a Dutch record producer, DJ, and remixer from South Holland. According to Djs And Festivals, “the radio show propelled Armin van Buuren to stardom and helped cultivate an interest in trance music around the world.”

Since 2001, Armin has hosted the A State of Trance radio show, which is broadcast in 84 countries on over 100 FM radio stations to more than 37 million weekly listeners.

Armin van Buuren has a complete simian line on his left hand.

He is a British broadcaster, politician, and political analyst who was the leader of the United Kingdom Independence Party from 2006 to 2009 and from 2010 to 2016.

Additionally, Nigel has strongly criticized the euro currency and has been noted for his speeches in the European Parliament. He also co-chairs the Europe of Freedom and Direct Democracy group.

Nigel Farage has a complete simian line on the right hand.

He is an American comedian, actor, director, writer, producer, and businessman who is an Emmy-nominated actor known for his roles in films, such as:

For his role as Dwight Schrute in The Office, Rainn earned 3 consecutive Emmy Award nominations for Outstanding Supporting Actor in a Comedy Series.

Rainn Wilson has a complete simian line on his right hand.

He is an American entrepreneur, author, life coach, and philanthropist who was listed on the Worth Magazine Power 100 list in 2015 and 2016. He is also the founder of a few companies which earn over $6 billion in annual sales.

SEE ALSO:  Prevagen vs Focus Factor – Which Is The Best Memory Supplement?

Additionally, Tony is known for his seminars, infomercials, and self-help books including:

Tony Robbins has a complete simian line on his right hand.

He is an American producer, actor, and director who has starred in films like:

Robert also received the Golden Globe Cecil B. DeMille Award in 2010, the AFI Life Achievement Award in 2003, and in 2016 – the Presidential Medal of Freedom from President Barack Obama.

Robert De Niro has a complete simian line in his left hand.

He is an English actor who has performed in television, film, radio, and theatre. He is best known for his role on the BBC television show ”Sherlock.”

He also starred in the following films:

In 2015, Benedict played William Shakespeare’s Hamlet at the Barbican Theatre. He is a graduate of the London Academy of Music and Dramatic Art and well from the Victoria University of Manchester.

Benedict Cumberbatch has a dissociated incomplete simian line on his right hand.

He is a director, actor, novelist, and screenwriter who first gained fame playing a prep school student in the 1989 film ”Dead Poet’s Society.”

Ethan Hawke has a complete simian line on his left hand.

He is a French businessman and actor who became one of Europe’s most prominent screen sex symbols and actors in the 1960s.

Over the course of his career, he worked with many renowned directors, such as – Jean-Luc Godard, Luchino Visconti, Michelangelo Antonioni, Jean-Pierre Melville, and Louis Malle.

He has achieved critical acclaim for roles in films like:

Alain Delon has a complete simian line on his right hand.

He is a British politician who served as Leader of the Labour Party and Prime Minister of the United Kingdom. He received the Presidential Medal of Freedom which was awarded by George W. Bush on January 13, 2009.

Tony Blair has a complete simian line on both hands.