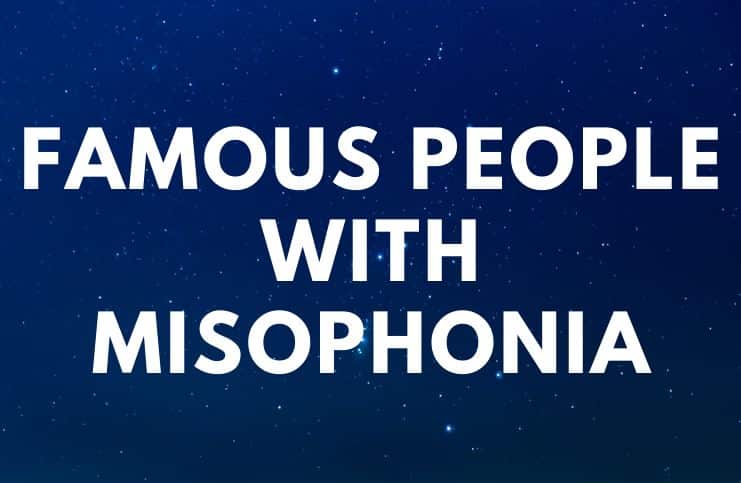 Misophonia (“hatred of sound”), also referred to as selective sound sensitivity syndrome, is a neurophysiological condition in which affected individuals have a disproportionately negative reaction to specific sounds.

Typically, the trigger sounds are noises made by other people, like –  tapping a pen or chewing gum. According to research on people with the condition, around 30 percent of them became verbally aggressive when hearing their trigger noise.

The condition begins around the ages of 9 to 13 and is more common in girls. Some research indicates that it may be quite common, occurring in approximately 20 percent of the population.

Individuals with selective sound sensitivity syndrome may experience the following when encountering a sound trigger:

Some suferrers also have visual triggers, such as:

Research has suggested that this neurophysiological condition may relate to parts of the brain which are responsible for regulating and processing emotions. Also, it may be caused by abnormalities in the auditory cortex and the limbic-autonomic nervous systems.

Risk factors for misophonia include having another hearing disorder or a mental disorder, like:

There are no evidence-based treatments for this neurophysiological condition.  But, some ways to manage the condition are:

For children, it is suggested that distress tolerance skills be taught.

Here Is A List Of 7 Famous People With Misophonia:

She is a British actress, singer-songwriter, fashion designer, television presenter and the daughter of heavy-metal musician Ozzy Osbourne.

Osbourne is a judge on both Australia’s Got Talent and Project Runway Junior. However, she is best known for her appearances on The Osbournes with her family, for which they won a 2002 Emmy Award for Outstanding Reality Program.

In addition, she is the voice of Hildy Gloom in the Disney XD animated series The 7D. Kelly has also appeared on Dancing with the Stars, in which she and her professional dance partner took the 3rd place.

Kelly Osbourne had “crazy meltdowns” while filming on the road with her father Ozzy and brother Jack because she suffers from misophonia.

He was a German-speaking Bohemian Jewish short story writer and novelist who explored the human struggle for security and understanding in his novels like The Trial, Amerika,  and The Castle.

Interestingly, the term ”Kafkaesque” has entered the English language to describe situations like those in his writing.

His best-known works include:

Franz Kafka famously once wrote: “I need solitude for my writing; not “like a hermit” – that wouldn’t be enough – but like a dead man.”

Douglas is the first African American to win the individual all-around event. Also, she was also a member of the gold-winning American team at the 2011 and the 2015 World Championships.

In one episode of the ”Hollywood Game Night,” Gabby Douglas confessed that she sufferers from misophonia.

Marcel Proust was a French novelist who is considered one of the greatest writers of the 20th century, especially for writing the seven-part novel In Search of Lost Time, or Remembrance of Things Past.

Proust’s books abandoned plot and dramatic action in favor of the narrator’s descriptions of his experiences in the world.

Marcel Proust also suffered from misophonia and lined the walls of his bedroom with cork to dampen the noise. Later, he developed an allergy to cork.

He was a Russian playwright and short-story writer, who is recognized as a master of the modern short story of the late 19th and early 20th centuries.

Chekhov also practiced as a medical doctor throughout most of his literary career. He once said – “Medicine is my lawful wife and literature is my mistress.”

His best short stories are held in high esteem by critics and writers and his career as a playwright produced 4 classics.

According to biographers, Anton Chekhov had misophonia.

She is an American dancer, actress, television producer, and talk show host who appeared on the ABC daytime drama ”All My Children,” between 1990 and 2002.

Ripa and her husband own a New York-based production company, Milojo. Additionally,  she played Faith Fairfield on the ABC sitcom, Hope & Faith, from 2003 to 2006. Ripa is also the co-host of ABC’s morning talk show ”Live with Kelly & Ryan.”

Kelly Ripa says that she discovered that she has misophonia after reading an article in the New York Times about the condition. For instance, Kelly needs to leave the room when her kids chew gum or if her husband starts to eat a peach.

She is a New Zealand voice actress and actress who had her first acting role in the 1993 film Heavenly Creatures. After, Lynskey starred in the following movies:

According to her fiancée, Jason Ritter, Melanie Lynskey has misophonia. Her father also has the condition.