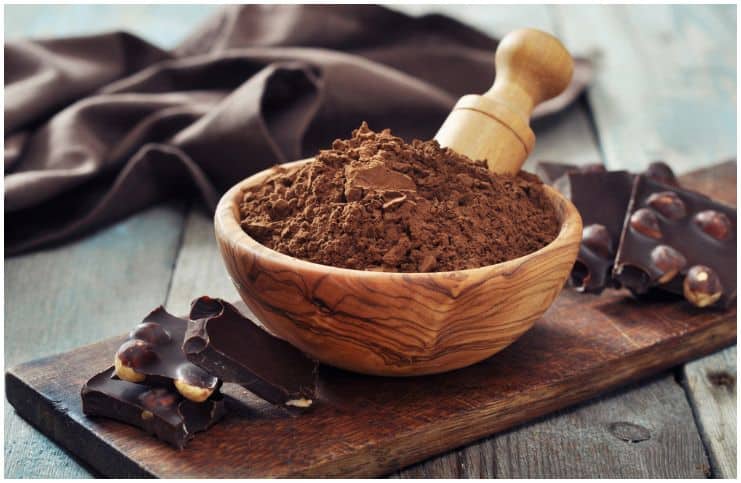 It belongs to the legume family, along with other notorious members of this class (soy, beans, lentils, lupins, peas).

The tree can reach heights of up to 12-15 meters. It grows spontaneously or is cultivated in the Eastern Mediterranean area, the Arab world, India, Brazil, and Argentina, but also Moldova, Croatia, and China.

Carob has been known and appreciated since ancient times, as it was used as a complete and basic food, by the poorest people, due to its extremely low price.

The seeds of the carob pods always have the same weight (0.18 g) and have been called “karat”, after the diamonds’ unit of measure (0.2 g). However, they are not indicated for consumption.

The fruit is an indehiscent pod, compressed, elongated, curved or straight, and thickened at the sutures.

The cocoa tree belongs to the family Malvaceae, growing 4-5 meters high, and is widespread particularly in Latin America. Ivory Coast, Ghana, Indonesia, and Nigeria are the world’s largest producers of cocoa.

Due to extremely aggressive advertising, chocolate consumption has continuously grown, the target market is the children, and the best sales periods are the holidays and celebrations of any kind.

Chocolate is a food derived from the seeds of the cacao tree, widespread and intensely consumed worldwide.

It is a product based on cocoa butter (the fatty part of cocoa seeds), with added cocoa seeds powder, sugar, and other optional ingredients: milk, whey, almonds, walnuts, its own lecithin and/or made from soybean, and other more or less healthy flavors.

“White chocolate” is a product obtained from cocoa butter, milk or milk-based products, containing <20% cocoa butter and 14% milk solids, but without the cocoa powder.

It is one of the few known sources of lecithin (0.3%), besides soy and egg yolk.

2 thoughts on “What is the Difference Between Carob Powder and Cocoa?”