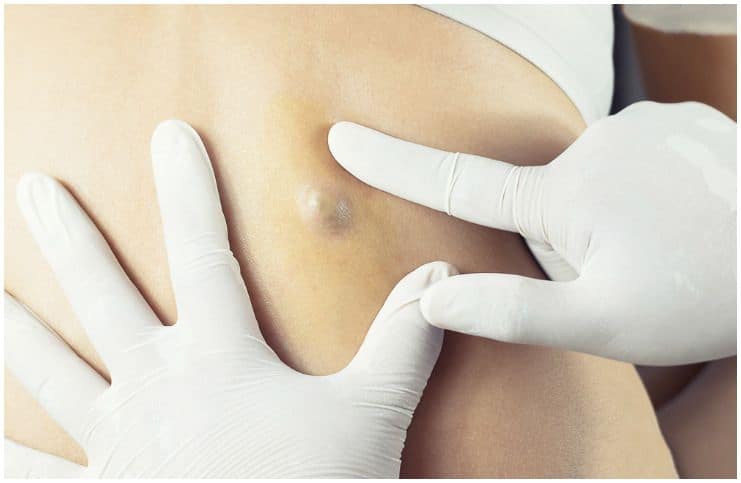 It is a noncancerous lump behind the ear, that develops underneath the skin. It can occur anywhere on the body, however, it is usually found on the neck, face, and torso.

Additionally, it has a size measuring up to a few centimeters, and it is very slow-growing.

If the cyst ruptures, you will need treatment right away since it can lead to a boil-like infection.

It occurs when a hair follicle is ruptured or swollen, either due to an injury to the skin, acne, or a sebaceous duct that is malformed.

It may also be caused by swollen hair follicles in the skin as well as due to trauma to the skin.

Other causes of a sebaceous cyst may include:

Some of the risk factors include:

Common tests used for a sebaceous cyst include:

Sebaceous cysts are commonly treated by draining the fluid and removing the shell which makes up the cyst wall.

SEE ALSO:  Otezla vs Humira For Psoriasis – Differences & Side Effects

A lipoma is a fatty lump which is most commonly located between the skin and the underlying muscle layer. Healthcare providers think that lipomas are benign tumors, meaning that they are non-cancerous growths. Cancerous tumors of the fat cells are called liposarcomas.

A lipoma can form on any part of the body, however, they usually appear on the:

It can develop in people of any age, even in newborns, however, it usually occurs in adults between ages 40 and 60. Approximately 1 in 100 people will develop a lipoma during their lives. They usually occur on one side of the body. Lipomas rarely grow more than three inches across.

The causes of lipomas are unknown. But, there are possibilities that they are caused by any physical trauma to the specific part of the physical body.

Additionally, genetic factors play a substantial role in the development of lipomas.

The following factors may increase the risk of developing a lipoma:

Your healthcare provider may perform one or all of the following exams:

Treatment of lipomas is not commonly required, however, some lipomas may be removed by liposuction (during which a needle and a large syringe are used to remove the fatty lump) or by surgery.

A lipoma is only removed when:

A lipoma is a growth of fatty tissue that slowly develops under the skin. It can occur anywhere on the body where fat cells are present, however, a lipoma tends to appear on the chest, trunk, shoulders, thighs, neck, and armpits. A lipoma is not cancer and is typically harmless. Also, you may be able to move a lipoma around a bit and it feels rubbery.

The main difference is that a lipoma is usually found more deeply beneath the skin, whereas a sebaceous cyst tends to be closer to the skin’s surface.