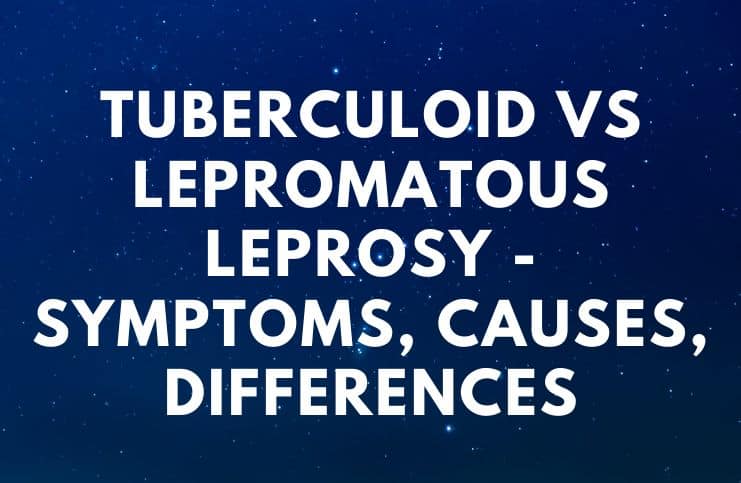 It is a form of leprosy that is characterized by skin lesions that are asymmetrically distributed with well-demarcated edges and few lesions.

TL starts with localized skin lesions which are at first flat and red, however, they enlarge and develop irregular shapes with elevated, indurated, depressed pale centers, and hyperpigmented margins.

An individual with TL only exhibits a few lesions. The infection is mild and only mildly contagious.

TL causes a rash, consisting of one or more flat and whitish areas on the skin. Other symptoms include:

It is a chronic infectious disease caused by Mycobacterium leprae.

After exposure to leprosy and the incubation period, the disease may fluctuate between different stages depending on the patient’s response to therapy or to cell-mediated immune response.

Risk factors include the following:

The bacteria can be seen with a microscope in a skin smear using a special stain.

Treatment can last between 6-12 months, sometimes longer. The disease can be cured with multi-drug therapy, a combination of 3 antibiotics – clofazimine, rifampin, and dapsone.

Because the disease pursues an extremely slow course, spanning several decades, most affected individuals die with leprosy rather than of it.

It is characterized by multiple skin lesions that are smaller than those observed in TL. Also, it affects the nerves, skin, and other organs. This form of leprosy is more contagious.

Lepromatous leprosy causes many small bumps or raised rashes on the skin. Other symptoms may include:

The disease results from the failure of Th1 cell (a type of T helper cells) activation that is required to eradicate the mycobacteria.

Risk factors for contracting the disease include:

In addition, people who are immunosuppressed could be more at risk of developing the disease. However, for unknown reasons, this increased risk does not apply to individuals with HIV.

Your healthcare provider may perform a lepromin skin test to determine the form of leprosy. Also, he will conduct a physical exam to look for the symptoms of the disease.

Treatment is by multidrug therapy in a combination of Rifampicin and Dapsone for paucibacillary leprosy for 180 days. In addition, clofazimine (an antileprosy agent with anti-inflammatory and anti-mycobacterial activities) is prescribed and the treatment is for one year.

Note – individuals with both leprosy and HIV can find that their condition worsens when they start the treatment.

Because close and prolonged contact is needed for transmission, people who travel into areas where the disease is present have a low risk of contracting leprosy.

In addition, it is recommended to exclude people with the disease from preschool, childcare, work, and school, until approval to return has been given by an infectious healthcare professional.

Tuberculoid leprosy is a form of leprosy that is characterized by one or more anesthetic patches or hypopigmented skin macules, where skin sensations are lost due to damage to the peripheral nerves which have been attacked by the human host’s immune cells.

Lepromatous leprosy is another form of leprosy that is characterized by pale macules in the skin.

Both forms of leprosy cause peripheral nerve damage and skin sores. However, LL is more severe and causes large, disfiguring lumps and bumps on the skin.

According to a 1996 study that was done at the Dermatology Service, Universidad del Valle, Cali, Colombia, the two distinct forms of leprosy are capable of responding to a polyclonal T-lymphocyte stimulus like anti-CD3.