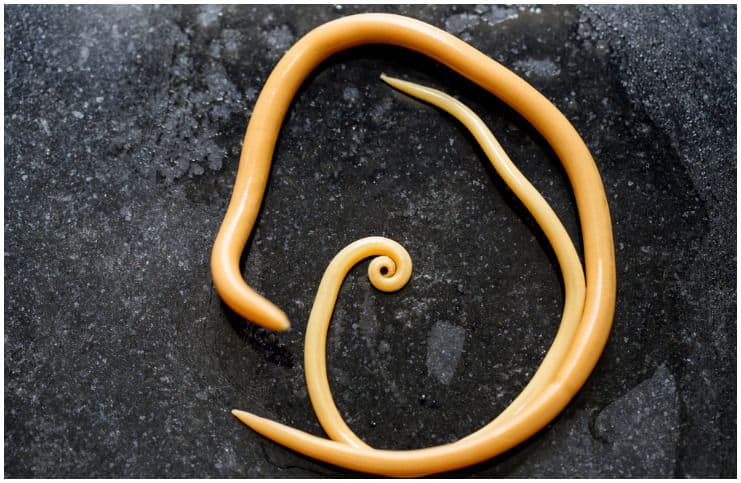 Here Is A List Of Top 33 Interesting Facts About RoundWorms:

#1 Roundworms, also called nematodes, are a type of parasitic worm. Their name is derived from their “round” or ”tubular” shape.

#3 They are about as thick as a pencil. They vary in length from a few millimeters to up to two meters.

#4 Interestingly, these worms are the only worms found in human feces which are roughly the size of an earthworm.

#5 They are considered zoonotic parasites. This means that they can be transmitted from animals to humans.

#6 A roundworm infection is also referred to as ascariasis.

#7 It is estimated that there are over 4,000,000 cases in the US at any time. However, infection is more frequent in warm climates.

#8 An estimated 1/6 of the human population is infected by Ascaris lumbricoides or another type of roundworm.

#9 The global distribution of cases of roundworm is as follows:

#10 Children are more likely to be infected since they put their contaminated fingers in their mouths more often.

#12 A whipworm infection can occur after ingesting dirt or water contaminated with feces containing whipworm parasites. It is the 3rd most common roundworm to infect humans.

#13 Unlike other types of roundworms, this one is not an intestinal infection but an infection which affects muscle fibers. Trichinosis is caused by eating undercooked or raw pork and meat infected with the larvae of the parasitic worm.

#14 The symptoms begin approximately 1 to 2 days after eating the contaminated meat and may last for about 7 days.

#15 Due to changes in the methods of feeding the pigs over the last three decades, trichinosis is not common in the United States anymore.

#16 It is transmitted through direct penetration of human skin by infective larvae. It enters through human skin, and then makes its way to the intestines. It is found in subtropical, tropical, and temperate regions.

#17 Most people who are infected with these worms do not know they are infected and have no signs and symptoms.

#19 Diagnosis may be done by visualizing pinworms in the vagina or on the skin near the anus or in the stools.

#20 It is transmitted by walking barefoot on contaminated soil. It is passed by human feces onto the ground. It is estimated that up to 1/5 of the world’s population is infected with these worms.

#21 The most common symptom is iron anemia which is caused by a loss of iron due to blood loss.

SEE ALSO:  Itraconazole vs Fluconazole - Which Is The Best Candida Albicans Treatment?

#22 It is transmitted from hand to mouth and is generally found in human feces. They are 3 to 6 mm in diameter, 20 to 40 cm long, and live for approximately 1 year. The female worms are larger than the males.

#23 The life cycle of roundworms varies between types. They can live inside the small intestine for up to 2 years.

#24 In northern climates, the eggs may remain dormant through the winter.

#25 Common symptoms in humans include:

#26 Symptoms in pets can include:

#29 Puppies can get these worms by ingesting soil that is contaminated, by eating an animal that is infected, in utero from the mother, or through the milk while nursing.

#30 A roundworm can produce as many as 200,000 eggs in a single day. These eggs leave the body through bowel movements.

#31 In most cases, these worms can be easily treated by taking a medication which kills the worms in approximately 3 days.

#32 The three primary medications which are used to treat an infection are:

#33 Here are preventive methods for a roundworm infection: