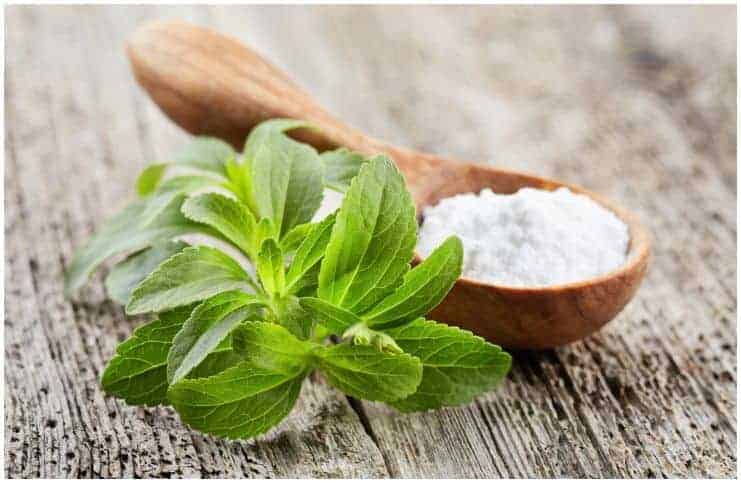 Native to eastern Asia and originally eaten by Buddhist monks, monk fruit (also known as longevity fruit or lo han guo) is a small melon which grows on the Siraitia grosvenorii.

It thrives in mountainous regions with plenty of shade and mist. The fruit itself has a sweet edible pulp inside a bitter outer rind and is round about 5 cm in diameter.

Throughout history, it was also used medicinally as a cough remedy, expectorant, and help with other respiratory problems.

An extract from this fruit is gaining popularity as a zero-calorie sweetener. It is sold on its own as a sugar replacement under the name Nectresse and is being used in diet foods.

Manufactures of this sweetener report that it is 150 to 250 times sweeter than table sugar, which allows it to be used in small quantities. Its sweetness comes from mogrosides, powerful antioxidants which are found in the flesh of the fruit.

Mogrosides are metabolized differently by the body than natural sugars – in a similar way with dietary fibers, meaning that they are not digested by the human body.

It is light beige in color and has a course sugar-like consistency. This sweetener is heat stable, meaning that you can cook and bake with it. Also, it is fat, cholesterol, and sodium free.

It does have a slightly fruity taste, and a vague artificial sweetener aftertaste, however, most people found it more pleasant than some other sweeteners on the market.

In one study, scientists concluded that 2 forms of the mongroside compounds found in this sweetener were able to function as potent natural antioxidants. Antioxidants are molecules that can inhibit the oxidation of other molecules.

This sweetener has no calories, therefore, it may be a great option for anyone watching their waistline.

As an antihyperglycemic, it has been shown to help reduce blood sugar (glucose) levels in the body.

According to research, this sweetener has reduced urinary albumin levels (a protein found in the blood) in diabetic rats, meaning that it can improve kidney damage caused by type 2 diabetes mellitus.

How To Use It

This extract can be added to baking, beverages, and desserts. Only a very small amount is needed, as the sweetness is so powerful.

When purchasing this sweetener, look for a product that is at least 80 percent pure extract. This means that it contains a high proportion of the mogrosides which actually give it the antioxidant-boosting power and sweetness.

The US Food and Drug Administration has deemed this product generally recognized as safe for everyone, including children and pregnant women.

This plant has more than 240 species of shrubs. It belongs to the Asteraceae family, which is the same family as sunflowers.

Stevia leaves contain various minerals and vitamins, such as – vitamin C, vitamin A (in the form of carotenoids), zinc, rutin, iron, vitamin B6, and magnesium. Additionally, the stevia leaf is high in antioxidants, that help to protect the body from free-radical damage as a result of environmental factors and metabolic processes.

A sweetener can be made from this plant. It can be up to 300 times sweeter than table sugar. Its sweetness is naturally derived from over 40 compounds, known as steviol glycosides.

Currently, over 5,000 products on the market contain this sweetener and that number continues to grow every year as this ingredient becomes more popular.

Some of the popular names for this sweetener include – Rebaudioside A/Reb A, Enliten, Rebaudioside B, PureVia, Rebaudioside C, Rebaudioside D, Steviacane, Rebiana, Steviol Glycosides, SweetLeaf, and Stevioside. China is the current leading exporter of these products.

However, there are many products found on grocery store shelves, like – Truvia, which don’t contain whole stevia leaf (only about 1 percent). They are made from a refined stevia leaf extract called rebaudioside A.

This sweetener tastes mostly sweet, however, it sometimes has a bitter, licorice-like, metallic and astringent off-note.

Preliminary research has suggested that this sweetener may interfere with the hypothalamus, and may curb the hunger sensation.

A double-blind, placebo-controlled study established that oral stevioside taken three times per day at doses of 250 mg, resulted in substantial decreases in both diastolic and systolic blood pressure in people with high blood pressure.

Type 2 diabetes, characterized by insulin resistance and elevated blood glucose (sugar), has escalated as one of the main health problems in today’s world. Only in the United States, there are over 85 million Americans age 18 and older who have prediabetes.

Taking a 1g stevioside capsule may reduce blood sugar levels after meals, according to a 2004 study that was issued in “Metabolism.”

SEE ALSO:  Guillain Barré Syndrome vs MS (Multiple Sclerosis) – How Do They Differ?

When buying this sweetener, look for Stevia rebaudiana, since it is considered the best type and the US Food and Drug Administration approved steviol glycosides extracts.

Stevia in its raw form is not approved for use as a food additive by the US FDA. But, the Food and Drug Administration approved Rebaudioside A.

The use of stevioside for high blood pressure can lead to myalgia (muscle pain) and mild gastric disturbances in some people.

Also, a 1999 study concluded that this sweetener decreases the fertility of male animal subjects. But, the amount of stevia is not specified.

Both products are advertised as natural products, but don’t be fooled by the word “natural.” For instance, some products with stevia actually only contain only about 1% of stevia, and monk fruit may come from a plant, however, it must be processed to some degree to become a liquid or powdered sweetener.

Regarding taste, unlike stevia, monk fruit doesn’t have the intensely sweet after-taste which some people dislike about stevia.