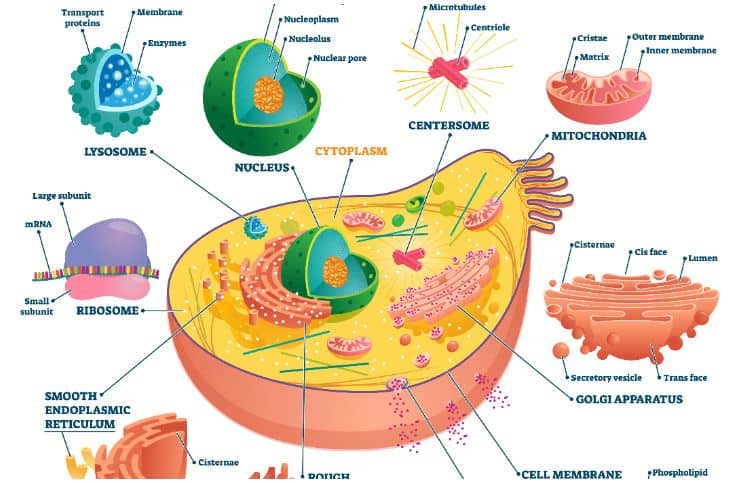 Here Is A List Of Top 25 Interesting Facts About Golgi Apparatus:

#1 The Golgi apparatus (GA), also referred to as Golgi body or the Golgi complex, is an organelle that is found in most eukaryotic cells. It is made up of a series of flattened, stacked pouches called cisternae.

#2 It is the seat of glycosylation of a number of secretory products of the cell.

#4 GA can be thought of as the “packaging, modifying and shipping warehouse” of the cell.

#5 The number of GA within a cell is variable. Plant cells can contain as many as a few hundred smaller versions, whereas animal cells tend to have fewer and larger GA.

#6 It is named after Camillo Golgi, an Italian scientist and physician, who discovered the membranous structure of the organelle in 1898. However, since microscopes of the time could not see cells in good detail, most scientists rejected his discovery.

#7 The reality of the GA became established unequivocally only with the application of electron microscopy. After the visualization of its structure, GA achieved the status of a cytoplasmic organelle.

#8 Although the GA was first described 120 years ago, the precise mechanism by which proteins move through the GA has still not been properly established.

#9 In more recent years, a level of complexity surrounding GA has emerged with the discovery that the GA is involved in cellular processes other than the ”classical” biosynthetic and trafficking pathways.

SEE ALSO:  Orabase vs Orajel – Which Is Better For Canker Sores & Toothache?

#10 Three different regions of the GA are currently recognized both in terms of function and structure:

#11 It is an internal organelle found close to the nucleus of the cell where it modifies specific proteins which have been delivered in transport vesicles.

#12 It has many discrete functions, however, they are all associated with moving molecules from the endoplasmic reticulum to their destination and modifying certain molecules along the way.

#13 GA works together with the endoplasmic reticulum (ER), therefore, both organelles are right next to one another. ER in a membrane system which forms a sequence of sacs within the cytoplasm.

#14 When a protein is made in the endoplasmic reticulum, something called a transition vesicle is made. Substances within the vesicles are secreted by a universal cellular process operative. Part of the molecules are secreted to areas outside of the cell. Other molecules are destined for the cell membrane where they help in intercellular signaling and membrane repair.

#15 Each Golgi stack has 2 faces (or ends). The cis face is the end of this organelle where specific substances enter from the ER for processing. On the opposite side is the trans face.

#16 Proteins enter the GA on the side facing the endoplasmic reticulum and exit on the other side of the stack.

#17 Proteins may be modified by the addition of a phosphate group (phosphorylation) or a carbohydrate group (glycosylation). These modifications may create a signal sequence on the protein, that determines the destination of the protein.

#18 An estimated 5 percent (984 proteins) of all human proteins have been detected in the GA by the Human Protein Atlas, a Swedish-based program which resolves the spatial distribution of the human proteome at a subcellular level.

#19 In plant cells, the GS also serves as the site at which the complex polysaccharides of the cell wall are synthesized.

#20 Lipid metabolism also occurs in the GA. This involves using ceramide synthesized and imported from the endoplasmic reticulum to synthesize glycolipids and sphingomyelin. These lipids have the capacity to combine with cholesterol to create domains, that has led to the conclusion that these lipids could contribute to protein sorting in the GA.

#21 GA consists of sets of membrane-delimited smooth-surfaced cisternae. Commonly, 5 to 8 flattened, disk-shaped cisternae are present in one GA, however, as high as 60 cisternae have been observed by researchers.

#22 Each set of cisternae resembles a stack of pancakes. Each of these is bound by a membrane and is held together by a matrix of proteins.

#24 These cisternae have 5 functional regions, and each region has different enzymes.

#25 Defects of the Golgi apparatus in diseases with abnormal processing or trafficking of lipids and proteins include: