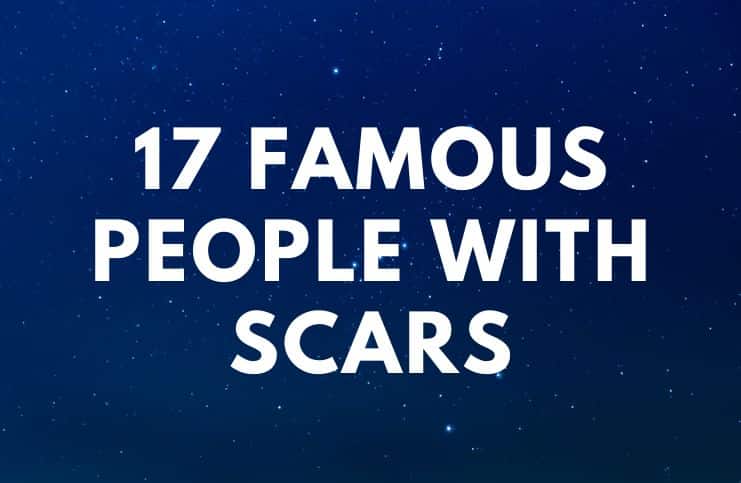 She has a scar on the front of her neck. It’s the result of the tracheotomy (an incision in the windpipe made to relieve obstruction to breathing) she had to have as an infant.

Jenner has a pale, four-inch scar on her thigh. She explained:

“When I was about five, my sister [Kendall] and I were playing hide and seek, and I hid inside this really tall, enclosed gate.”

“After a while, when my sister didn’t find me, I had to climb up on this sharp pole sticking out from the gate. I slipped, and the pole went into my leg. I tried pulling away to get the pole out, but it just tore through my whole leg.”

Teller has facial scars that are caused by a 2007 car accident. Miles said:

”My buddy lost control of my car going 80 mph. We flipped eight times. I got ejected out the window.”

”The car landed and I was just laying like 50 feet from the car, unconscious, covered in blood. My buddy thought I was dead.”

He has a scar between his upper lip and nose.

The scar developed while Phoenix was still in his mother’s uterus. It is known as a microform cleft, a mild form of a cleft lip. Joaquin has been quoted as saying that:

“while pregnant with him, his mother felt a sharp pain one day, and he was born with a mark on his lip.”

Ford has a scar on his chin. He explained:

“A fast car crash, a real mundane way of earning it.”

A resident at a local hospital stitched him up. Ford has joked that the doctor must have used paper clips.

SEE ALSO:  Lamisil vs Lotrimin For Ringworm and Jock Itch – Differences & Side Effects

She has a scar on her neck. Sharon revealed she got it as a child when she was riding a horse that ran into a clothesline that was so tight it almost ripped her neck open.

Latifah has a two-inch scar that sits just under her hairline. She said:

“Playing tag with my brother, I tripped over the telephone cord and hit my head on the corner of the bathroom wall.”

”I got three stitches. Then I fell on my grandmother’s steps and busted it open again. I was three. I was a clumsy child. I’d never cover it up, it gives my face character.”

He has a distinctive scar over his left eye that was the result of an injury when filming for Patriot Games. During the filming of the movies, Harrison Ford hit him with a boat hook, an accident that led to several stitches.

In 2010, she completely crushed the bottom of her leg during a horseback riding incident. Cuoco explained during an interview:

“I had a fr*ak accident. It was the end of my lesson. I had been jumping all day. At the end of the lesson, my horse spooked and I wasn’t really expecting it and I fell off.”

”I was actually getting up but my horse was still kind of spooking. He was in the corner trying to get away from me. He leaped over me and landed on my leg.”

When Tina was just 5 years old, a stranger approached her in her front yard and violently cut her on the cheek. She later recalled:

“It’s really almost like I’m kind of able to forget about it, until I was on camera, and it became a thing of ‘Oh, I guess we should use this side’ or whatever. Everybody’s got a better side.”

When she was an adolescent, Sandra fell into a lake and hit her head on a rock, causing the skin next to her left eye to scar.

He has a scar on his face, that resulted from a fight on his 25th birthday. Williams explained:

“There was a popping party going on in Queens. I went outside to get some air, and I saw that two of my other friends were being surrounded by some dudes I didn’t know.”

That’s when someone else approached Michael from behind.

“The dude wiped his hand across his mouth and … smacked me. What he did was he spit a razor. He was positioning the razor in his mouth to get it between his middle finger and ring finger. And then he swiped me down my face.”

Middleton has a scar on the side of her head, which is the result of a serious operation.

Buckingham Palace released a statement where they said:

“The scar is related to a childhood operation.”

She has a scar from an operation to reduce her breast. Winter wrote on Twitter:

“Guys there is a reason I didn’t make an effort to cover up my scars!. They are part of me and I’m not ashamed of them at all.”

Blige has a scar below her left eye. There are some rumors which say that it resulted from a fight she had with another woman. During an interview, Mary said:

“If I don’t accept the scar on my face, the lips that God gave me, the big giant feet, the long legs, whatever it is that I’m deformed with, I got to love it so everybody else can love it.”

When Lakshmi was 14, she was involved in a car crash which left her with a 7-inch-long scar on her arm. She declared:

”An ambulance carried me to the hospital. My right arm had been shattered and my right hip had been fractured.”

”After surgery, I regained the use of both of them but was left with a long scar on my arm. It was half an inch wide and seven inches long.”

In a different interview, Lakshmi said:

“I love my scar. It is so much a part of me. I’m not sure I would remove it even if a doctor could wave a magic wand and delete it from my arm.”

”The scar has singled me out and made me who I am.”

He has very characteristic types of scars on his scalp and face, that is caused by a skin disease called discoid lupus erythematosus.