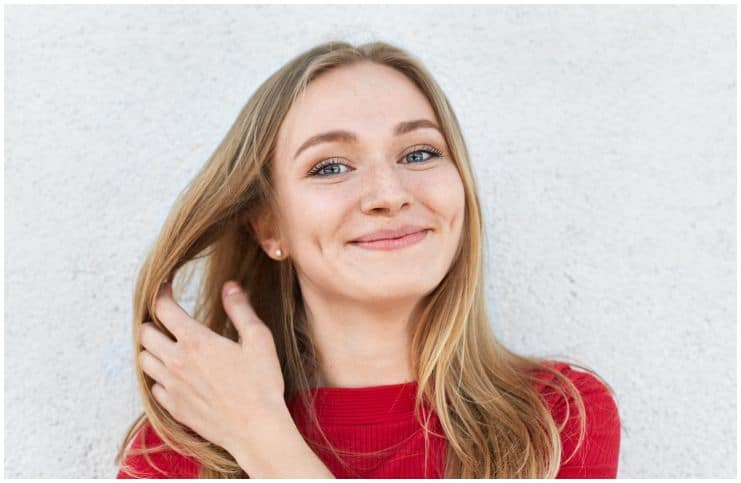 A dimple is a visible indentation anywhere on the skin. Dimples are commonly found on both cheeks. A rarer form is the single dimple, that occurs on one side of the face only.

Dimples are caused by having differences in a human facial muscle, called zygomaticus major facial muscle structure. Cheek dimples used to be considered a dominant trait. But, in the present day, more scientists consider them a genetic abnormality.

“Cheek dimples are a genetically transmitted abnormality of a muscle in the cheek,” said plastic surgeon Brent Moelleken.

Her debut album ”Yours Truly” shattered a few records and ruled the ”Billboard Top 100” chart for three weeks. In early 2015, Ariana embarked on The Honeymoon Tour, with shows in Europe, North America, South America, and Asia.

In 2016, Grande was seen in the Ben Stiller comedy flick ”Zoolander 2” in a cameo role.

Gordon-Levitt is an American filmmaker, singer, actor, and entrepreneur who made his big-screen debut with the release of ”A River Runs Through It” in 1992.

SEE ALSO:  Oxybutynin vs Vesicare – Comparison of Uses & Side Effects

Cameron is a top American film actress. At 16, Diaz took off on a 6-year modeling tour with Elite, before bursting onto the Hollywood scene with the Jim Carrey comedy ”The Mask.”

Diaz’s real foray into the mainstream came with her role in ”My Best Friend’s Wedding,” that also starred Rupert Everett and Julia Roberts. In 2003, Cameron hooked up with pop singer Justin Timberlake, hence, attracting even more attention to the happy couple.

Tautou is a French actress who made her acting debut at 18 on television and her feature film debut the following year in Venus Beauty Institute. In 2000, Audrey was a fixture in movie theatres, appearing in ”Voyous voyelles” (Pretty Devils), ”Épouse-moi” (Marry Me), ”Le Battement d’ailes du papillon” (Happenstance), and ”Le Libertin” (The Libertine).

In 2011, Tautou appeared in ”Delicacy,” a French romantic comedy-drama that was directed by Stéphane and David Foenkinos and based on the novel of the same name by David Foenkinos. Audrey told Stevie Wong of The Straits Times:

“I am, at the end of the day, a French actress. I am not saying I will never shoot an English-language movie again, but my home, my community, my career is rooted in France. I would never move to Los Angeles.”

Jennifer Anne Garner is an American actress. In October 2000, Jennifer married Scott Foley — who she met on the set of the TV show “Felicity.” On January 20, 2002, she won her first Golden Globe for best performance by an actress in a drama television series.

She is a renowned Israeli model and an occasional television personality and actress. Bar featured in international editorials and magazine covers of Elle, Glamour, GQ, Maxim,  Cosmopolitan, Esquire, and Harper’s Bazaar, however, she rose to popularity for her appearance as a cover girl for Sports Illustrated Swimsuit Issue.

Refaeli is the first Israeli model to be featured in Sports Illustrated magazine. On September 24, 2015, she got married to Adi Ezra.

She is an American model and actress, who is best known for her role as Hanna Marin in the teen mystery-drama television series Pretty Little Liars. In 2004, Ashley signed a 3-year contract with NBC daytime soap opera ”Days of Our Lives.”

In 2012, Benson appeared in the art film Spring Breakers and she was also cast in the 2015 feature ”Pixels.”

She is an American model, actress, and television personality. Her mother is African-American and her father is Ashkenazi Jewish.

London was home-schooled during her sophomore to senior year of high school. in 2006, Lauren made her television debut in the “Everybody Hates Funerals” episode of the sitcom ”Everybody Hates Chris.”

She also appeared in music videos for Ludacris and Snoop Dogg. In 2006, Lauren appeared in an episode of Everybody Hates Chris.

She is an English television personality and singer who rose to fame in late 2002 upon winning a place in Girls Aloud, a group created through ITV’s Popstars: The Rivals. In addition, Cheryl has enjoyed some success as a solo artist and appeared as a judge on The X Factor.

In 2003, Cole was sentenced to complete 120 hours of unpaid community service and paid £500 compensation for assaulting a nightclub worker. In June 2005, Cheryl got engaged to footballer boyfriend Ashley Cole.

He is an American model, actor, producer, who is best known for his interpretation of James “Sawyer” Ford in the ABC series, ”Lost,” that follows the stranded survivors of a plane crash on a mysterious island.

In March 2007, Josh was selected as the new face for Davidoff’s “Cool Water” fragrance worldwide.

She is an Australian model who rose to prominence in 2007 as one of the Victoria’s Secret Angels. Other companies Miranda Kerr has worked for include:

Kerr was also seen in the reality show ”Project Runway” where she modeled in the clothes that were designed by one of its contestants Daniel Vosovic.