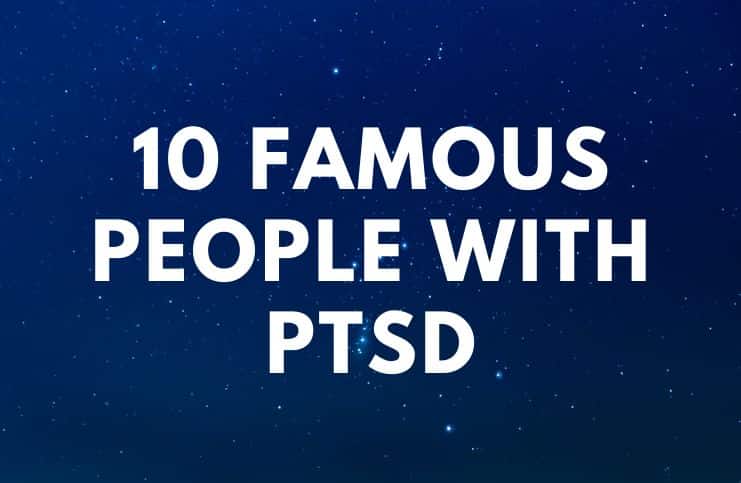 Post-traumatic stress disorder is a mental health condition that is triggered by a terrifying event — either witnessing it or experiencing it.

Approximately 8 of every 100 people will experience post-traumatic stress disorder at some point in their lives, as per the National Center for PTSD.

An estimated 67% of people exposed to mass violence have been shown to develop post-traumatic stress disorder, a considerably higher rate than those exposed to natural disasters. Also, women are more likely to develop this condition than men.

Types of events that can lead to PTSD (post-traumatic stress disorder) include:

Some factors that may make you more vulnerable to developing this condition include:

The effects of this condition touch every area of an individual’s life leaving virtually nothing unscathed. The most common effects of PTSD may include:

Here is a list of 10 famous people with post-traumatic stress disorder:

She was born on March 22, 1976, at Southern Baptist Hospital in New Orleans, Louisiana. Reese is an Academy Award-winning actress who is known for her roles in ”Walk the Line,” ”Legally Blonde,” and ”Wild.” On 5 June 1999, Reese married Ryan Phillippe, her Cruel Intentions co-star.

In 2007, Witherspoon was named Global Ambassador of Avon Products and also serves on the board of the Children’s Defense Fund.

He is an English multi-instrumentalist, singer-songwriter, composer and actor who gained fame as one of the founder members of the Rolling Stones.

She is an American songwriter, singer, and actress. She is the daughter to Joseph Anthony Germanotta, Jr. (an internet entrepreneur) and Cynthia Louise (Bissett).

Lady Gaga became the first recording artist in history to have 3 singles sell over 4 million copies each online.

She has also revealed that she has suffered from post-traumatic stress disorder since she was raped at the age of 19.

Alanis Morissette is a Canadian-American musician, alternative rock singer-songwriter, record producer, multi-instrumentalist, and actress. Her 1st demo named “FATE STAY WITH ME” was recorded in Toronto at Marigold Studios.

In a clip from Oprah’s Super Soul Sunday, she said her early experiences with fame caused her to suffer from the PSTD.

She is a South African-born actress who is best known for her roles in films such as ”Monster” or ”North Country.”

In 2017, Charlize Theron starred in the action thrillers ”Atomic Blonde,” in which she played a British spy and ”The Fate of the Furious,” the 8th film in the Fast and the Furious series.

She admitted that seeing her mother shoot her father died when she was 15 made her experience PTSD.

She is an award-winning actress, comedian, and human rights advocate. In addition, Whoopi Goldberg is the longtime host of the daytime talk show ”The View.”

After witnessing two planes collide in midair, she developed PTSD.

She was born on January 29, 1954, on an isolated farm in Kosciusko, Mississippi. She spent her first 6 years with her maternal grandmother. Interestingyș, Oprah Winfrey was frequently forced to wear dresses made of potato sacks due to the poverty they faced.

In 1996, Oprah did a show on sexual abuse in which she revealed that a relative raped her when she was only 9. Also, she was later abused by many people for a few years.

She was born on July 28, 1929, to John Vernon Bouvier III and Janet Lee Bouvier. Jacqueline graduated from George Washington University in 1951 with a Bachelor of Arts degree in French literature.

In 1951, she also met John Fitzgerald Kennedy for the first time. In 1952, Kennedy was elected senator from Massachusetts and moved to Washington. On September 12, 1953, she married Kennedy at a wedding which was the social event of the season.

She experienced the assassination of her husband firsthand, that led to her having a PTSD.

He was a regular on Saturday Night Live from 1995 until 2009, making him the longest tenure of any cast member.

SEE ALSO:  Clotrimazole vs Terbinafine – Which Is The Best Antifungal Medicine?

Darrell has made it public that he suffered from this condition after being sexually abused as a child.

She is a Yugoslav-born American former world no. 1 professional tennis player. On April 30, 1993, Gunter Parche stabbed her with a boning knife between her shoulder blades.

After this event, Monica Seles suffered from the post-traumatic stress disorder.

Shia LaBeouf is an American performance artist, actor, and filmmaker. His father has Cajun (French) ancestry, while his mother is from an Ashkenazi Jewish family.

He has opened up about hearing his mother being raped, as he revealed he suffered PTSD due to the incident.

She is an American actress and singer who began her career in 2008 in the Broadway musical.

In May 2018, In an interview with British Vogue, Ariana Grande said ”my anxiety has anxiety” following last year’s attack during the concert which left 22 dead.

She is an actress who 1st achieved fame for her roles in ”Deliver Us From Eva” and ”Bad Boys II.”

“I’m here to tell you that I am a PTSD survivor, thriver, badass, MF-er. I was diagnosed with post-traumatic stress disorder at 19 after I was raped at gunpoint and I didn’t let it stop me,” Union said in a new video for The Child Mind Institute’s #MyYoungerSelf campaign.

In March 2018, Monica said she had been diagnosed with PTSD as a result of being “publicly outed and ostracised,” after Clinton–Lewinsky scandal.

Do you know any other celebrities with PTSD (post-traumatic stress disorder)? Please let us know in the comments below.