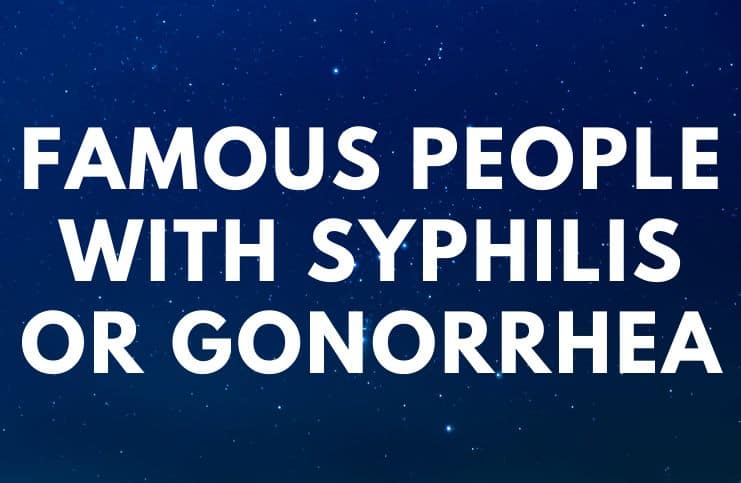 Syphilis is a sexually transmitted disease caused by a severe infection with a pathogenic bacteria known as Treponema pallidum.

About 60% of patients are men who have sex with men or with both women and men, according to the Centers for Disease Control and Prevention.

Gonorrhea, also referred to as the clap, is a bacterial infection caused by the organism Neisseria gonorrhoeae which is typically transmitted by sexual contact.

Here is a list of 15 famous people with syphilis or gonorrhea (STDs):

Al Capone was born in Brooklyn on January 17, 1899, and his parents, Teresa Raiola and Gabriel Capone (a barber), were immigrants from Naples.

In the 1920s, he was one of the most feared men in the US, a criminal whose campaign of murder and extortion touched even the world of politics.

However, as an inmate at Alcatraz in the early 1930s, if not earlier, he showed signs of brain deterioration caused by dying of syphilis, and his last years in prison were a combination of physical and mental decline which resulted into a state similar to a child-like existence.

Howard Robard Hughes was a movie producer, American businessman, mine owner, aircraft inventor, and casino owner who became notorious in the final years of his life when he lived as an eccentric solitary.

He also suffered from a few debilitating conditions and illnesses which contributed to his mental and physical problems in the last years.

SEE ALSO:  Pro And Cons Of Being A Vegetarian (Athlete Or Sedentary)

He was born on June 22, 1903, in the Oak Hill section of Indianapolis, a middle-class residential neighborhood.

His gang robbed four police stations and two dozen banks. He also escaped from jail twice. In 1924, Dillinger was diagnosed with gonorrhea when he was first sent to prison.

He is probably the most notorious occultist of all time. Aleister Crowley was a self-proclaimed magician and one-time prophet.

In 1895, he entered the Moral Science Tripos at Trinity College. However, Crowley later switched to English literature. In 1900, he started a tour of the world that would include Mexico, where he was initiated into the Masonic Order.

Aleister contracted gonorrhea as a teenager. Additionally, he later caught syphilis from a prostitute while attending Cambridge.

Tallulah Brockman Bankhead, born on January 31, 1902, in Huntsville, Alabama, was an award-winning actress. She was known for her racy affairs, flamboyant personality, and deep voice.

For instance, in 1926, Tallulah gained acclaim for her stage performance in They Knew What They Wanted.

In 1939, Tallulah was in the play The Little Foxes. Tallulah Brockman Bankhead also starred in the Hitchcock film Lifeboat in 1944.

However, in 1933, she was rushed to hospital with abdominal pain where she was diagnosed with gonorrhea and underwent an emergency hysterectomy.

It was rumored that she caught gonorrhea from Gary Cooper. She died on December 12, 1968, in New York City.

Henri Marie Raymond de Toulouse-Lautrec-Monfa was a French printmaker, painter, caricaturist, draughtsman, and illustrator whose immersion in the theatrical and colorful life of Paris in the late 19th century allowed him to produce a collection of enticing images of the affairs of those times.

SEE ALSO:  Baclofen vs Flexeril (Cyclobenzaprine) – Which Is The Better Muscle Relaxer?

Henri de Toulouse-Lautrec frequently lived and painted in brothels, where he made friends with prostitutes as he painted and drew them at play and work.

Some historians think that he may have contracted syphilis from one of his models.

Born into a family of Scots gentry in 1740, James Boswell was heir to a large estate in Ayrshire. He was the son of a dour Scottish judge, who instilled in him a strict regard for truth.

Even if he lived in Edinburgh where he worked as a lawyer, James Boswell made frequent trips to London.

His diary records regular sexual encounters with many different prostitutes and the ensuing bouts of venereal infections. Actually, he contracted a venereal disease from his very first sexual contact.

He is a Canadian-American comedian, actor, screenwriter, impressionist, and producer. Jim Carrey is famous for his flexible facial expressions and rubbery body movements.

Currently, he is accused of giving his ex-girlfriend Cathriona White 3 sexually transmitted diseases (including Gonorrhea) before her suicide. Nevertheless, his lawyer claimed the suits’ claims were predatory and malicious.

James Ewell Brown “Jeb” Stuart was a US Army officer from the state of Virginia, who later became a Confederate States Army general during the American Civil War. There was speculation that he had gonorrhea.

He was an American pianist and composer. He achieved fame for his compositions and was dubbed the King of Ragtime. He also suffered from syphilis for more than twenty years.

He is known for works like “Irises” and “Starry Night” and is considered the greatest Dutch painter after Rembrandt. His potential affliction with syphilis is one of many ascribed to the tragic Dutch artist.

SEE ALSO:  Unisom vs ZzzQuil For Insomnia – Differences & Side Effects

He was an American statesman and lawyer who served as the 16th President of the US from March 1861 until his assassination in 1865. It is thought that he passed syphilis on to his wife.

Adolf Hitler initiated fascist policies in Nazi Germany that led to World War II and the deaths of at least 11 million people. However, Adolf was in a constant battle with numerous illnesses; and one of those was syphilis.

He was an Indian-born British actor and the founder of the renowned Barrymore theatrical family. He is actually the great-grandfather of actress Drew Barrymore. Maurice was diagnosed with syphilis in 1901 after he became suddenly insane.

He was a remarkable figure in Regency England and for numerous years the arbiter of men’s fashion. He had syphilis.

He was a Russian communist politician, revolutionary, and political theorist.

According to new evidence that has been uncovered recently, Lenin actually succumbed to syphilis.

Do you know any other celebrities with syphilis or gonorrhea? Please let us know in the comments below.