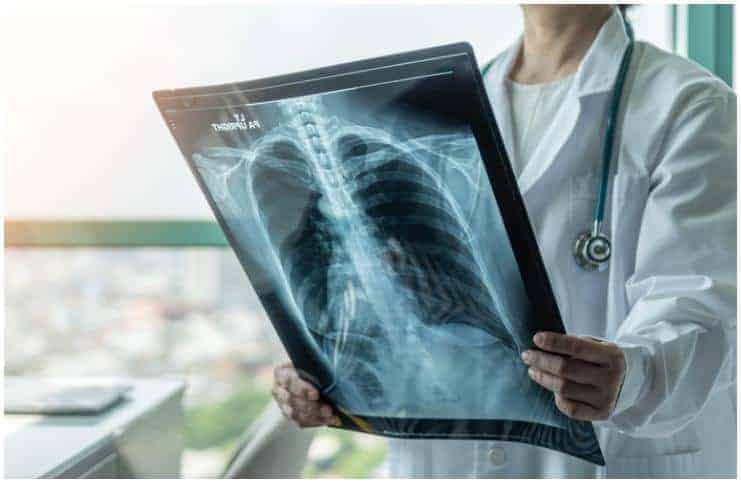 This article reveals the differences between atelectasis vs pneumothorax (collapsed lung):

It is the collapse of a segment or lobe of the lung or an entire lung. Surgery is one of the common causes of the condition, particularly the one involving your chest or upper abdomen.

Atelectasis of the lung after inhalation anesthesia in surgical patients in the United States occurs in about 87 percent of cases, according to the American Journal of Respiratory and Critical Care Medicine.

There may be no obvious symptoms of atelectasis. But, if you do experience symptoms, they may include:

Some of the complications which may arise include:

It is caused by pressure from outside the lung or by a blocked airway. A complete list of possible causes includes:

Bronchoscopy (involves inserting a bronchoscope tube) or oximetry test may be done for some patients.

To check for any fluid accumulation or presence of any tumor and to detect the condition, your healthcare provider may do a CT scan (computerized tomography) as well as he may request for chest X-ray (uses small amounts of radiation to produce pictures of the organs).

Treatment may include chest physical therapy, drug therapy, and sometimes surgery. However, the collapsed lung commonly expands once the cause has been corrected.

It is a collection of free air in the chest outside the lung which causes the lung to collapse. Women are more likely to be affected around the age of 30 years and men in their early 20s.

Primary spontaneous pneumothorax (PSP) – it usually occurs in healthy people. It is not caused by an injury, like – a rib fracture. Also, due to the rupture of small subpleural blebs, PSP commonly occurs in tall, thin young men.

Tension pneumothorax (TP) – it is usually caused by a lung laceration that allows air to escape into the pleural space. TP is a life-threatening condition that is more likely to occur in patients on mechanical ventilation.

SEE ALSO:  Nortrel vs Necon – Comparison of Side Effects & Uses

Secondary pneumothorax (SP) – it occurs in the presence of existing lung disease as well as a cyst in chronic obstructive pulmonary disease or a rupture of a congenital bulla. Because of acute respiratory failure, SP usually requires admission to the intensive care unit.

A chest x-ray shows the air pocket and the collapsed lung outlined by the thin inner pleural layer. Also, a physical examination can confirm the diagnosis if the pneumothorax is large.

The treatment depends on the size of the clinical symptomatology, the pneumothorax, and the frequency of the occurrence.

SEE ALSO:  Adrafinil vs Modafinil – Which One Is Best?

If the sufferer is not mechanically ventilated and the pneumothorax is small, his condition can be observed.

Atelectasis is the incomplete expansion of a lung or the airlessness or collapse of a lung which had once been expanded. It is one of the most common breathing complications after a medical surgery.

A pneumothorax can be caused by certain medical procedures, a penetrating or blunt chest injury, or damage from underlying lung disease. The symptoms can vary from mild to life-threatening and they include: