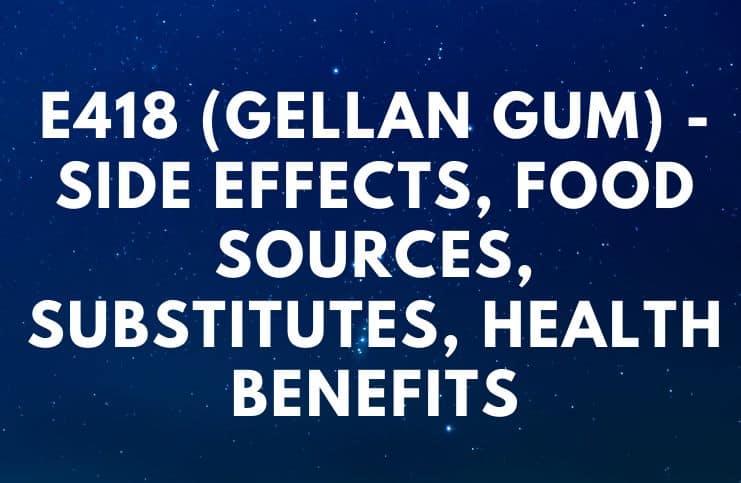 E418 or Gellan Gum is a polysaccharide produced by the bacterium Sphingomonas elodea. This bacterium was discovered in the 80s in the US and is obtained by fermenting starch. It received full food approval in the U.S FDA in 1992.

Due to the fact that E418 is stable at temperatures of 120° C and that it takes half the amount than agar, it was used to replace the latter in the composition of the environments needed for the growth of microorganisms, especially thermophilic ones.

It was first introduced in the food industry in Japan (1988). It was subsequently approved for use in food in many countries, including the European Union.

E418 is used as thickener, emulsifier, stabilizer, substitute for gelatin in products. It can also be used in sorbet and ice cream recipes which behave as a fluid gel after churning.

It is not cytotoxic (the quality of being toxic to cells) and can be injected into tissues.

Since it is produced from bacteria fermentation, this product can be consumed by vegans and vegetarians. However, gellan gum produced from whey is not vegan.

Similar to locust bean gum, this product has also been studied in humans as a potential cholesterol-lowering compound.

It gum was also successfully used for the microencapsulation of temperature-sensitive probiotics as Bifidobacterium longum ATCC 15707.

SEE ALSO:  Aspirin vs Tylenol - Which Is The Best Headache Medicine?

Side Effects of Gellan Gum

It has a laxative effect if consumed in large quantities due to the fermentation of intestinal flora. However, its gum is not cytotoxic and can be injected into tissues.

Apart from this, there were no other side effects noticed; however, keep in mind that these tests were conducted on short periods of time (less than a month) and thus long-term effects are still unknown as they have not been studied yet.

It is not allowed in foods for infants and young children. It is also advised that pregnant women should avoid foods containing E418.

This product can be substitute with xanthan gum, guar gum, and locust bean gum, all similar products which are used to help stabilize, bind, and texturize products.

Both xanthan and gellan gums are polysaccharides made by fermentation of Xanthomonas campestris and Pseudomonas elode.

It is commonly used in foods made with gluten-free flours, where it acts as a gluten substitute of sorts by binding the food together. Xanthan gum, 1 percent, can produce a substantial increase in the viscosity of a liquid.

Moreover, according to a 2009 study, xanthan gum substantially retarded tumor growth and prolonged survival of mice who had melanoma.

Note – it is accepted as a safe food additive in the European Union, the United States, Canada, and many other countries, with E number E415.

It is derived from the sap of the acacia tree. Guar is used in ice creams and coconut milk. Also, it is one of the most frequently used binding gums in most baked gluten-free products and gluten-free recipes.

SEE ALSO:  Flovent vs Flonase - Comparison of Uses & Side Effects

It is a natural food additive that comes from the carob seeds of the carob tree. This type of gum substantially improves gel strength and texture. Locust bean gum occurs as a white to yellow-white powder.

Also, it prevents syneresis when used in combination with carrageenans.