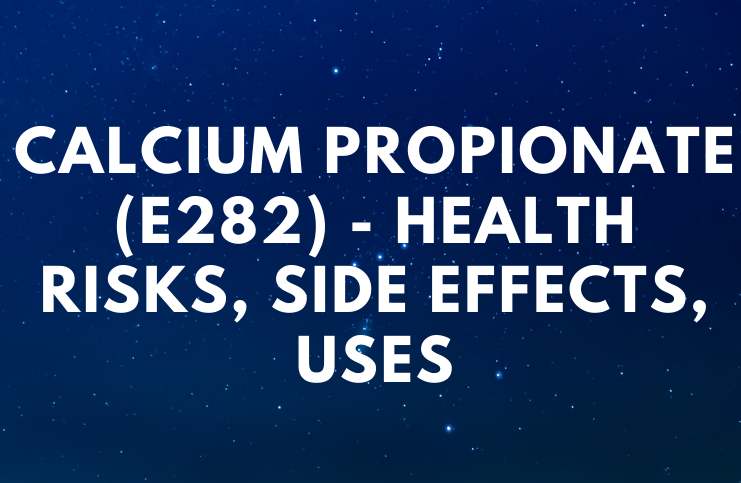 Calcium propionate, also known as calcium salt and propanoic acid, is a food additive used in the food industry to extend the shelf life of products (preservative).

This additive is industrially obtained from propionic acid and calcium oxide.

The chemical term of E282 additive is calcium propionate. This additive is prepared by hydrolyzing calcium hydroxide with propionitrile (also known as propanenitrile), resulting in ammonia and E282.

After the removal of ammonia, the reaction mixture is neutralized with an antifungal agent – propionic acid, which reacts with excess calcium hydroxide to form additional E282.

It is GRAS regulated by the FDA in article 21CFR184.1221 in the Code of Federal Regulations.

Because it is a chemical, easily synthesized without needing to be extracted from any animal sources, this compound is vegan-friendly.

Chemical preservatives are added to almost all processed foods to extend the shelf life and prevent spoilage. They work by inhibiting the metabolic activity and growth of microbes.

It is successfully used in the following products: pre-packaged sliced bread and superficial treatment of cheese.

Also, it is naturally found in fermented foods and matured cheese. As a side note, due to its synthesized formula, without the need to be extracted from any animal source, this substance is considered vegan-friendly.

The need to use this additive in the food industry lies in its fungistatic effect, preventing the mildew of foods, such as bread and bakery products.

This substance works primarily as an inhibitor. In simple terms, this means that it works within a substance to stop the energy source that any development of bacteria would depend upon.

As a result, this compound prevents even naturally occurring bacteria from feeding since it destroys or at least blocks the enzymes that provide important fuel for bacterial growth.

The additive has a weaker action against bacteria and yeasts. As well as other salts of propionic acid, it acts by reducing water activity. Propionic acid salts are preferred, because of their characteristic taste, which is weaker than the taste of the acid they derive from.

Where Can You Find It?

Some cheeses, such as Swiss cheese or Emmentaler, contain naturally occurring E282, which develops as the cheese ripens and acts as a preservative in the cheese.

Also, it is used in sports drinks and beverages. In addition, it can be found in alcoholic beverages such as malt beverages, beer, cider, and distilled spirits with more than 15% alcohol.

You should keep in a cool, dry place for 1 year in a sealed bag.

One effect worth mentioning (after consuming foods with this food additive) is irritation of mucous membranes in the digestive system.

SEE ALSO:  Eliquis vs Aspirin - Comparison of Side Effects & Uses

This effect is reversible (disappears after cessation of use) and it was noticed in the case of an amount 2-3 times greater than the daily amount consumed by people. In some cases, it can also cause allergies, intolerances, eczema, skin rashes, etc.

You may experience some or all of these symptoms after ingesting foods with this food additive:

The most severe type of allergic reaction is called – anaphylaxis.

Signs and symptoms of anaphylaxis include throat or facial swelling, hives, light-headedness, wheezing, shock. and vomiting.

The chances of developing an allergy reaction increase when you regularly consume foods and drinks containing this food additive.

According to Chris Young, coordinator of the ”Real Bread Campaign,” a campaign which aims to increase the production of bread made with natural ingredients:

“Over years several questions have been raised over this and other additives used.

Calcium propionate, for example, has been linked to hyperactivity in children and skin irritations in bakery workers.”

Researchers from Harvard T.H. Chan School of Public Health, in Boston, established that the intake fo foods or drinks with this food additive cause the liver to produce high levels of blood glucose (sugar), that, in turn, led to high levels of insulin in the blood.

SEE ALSO:  Sudafed vs Dayquil - Comparison of Side Effects & Uses

Every day, we are exposed to some type of heavy metal toxin, whether it’s the water we drink, the air (pollution or tobacco smoke), or the food we eat.

Heavy metals (including cadmium, lead, arsenic, and mercury) are persistent in the environment and have been scientifically documented the potential for life-threatening health consequences. For instance, heavy metal toxicity may damage:

This additive is an additional source of heavy metals, therefore, in order to exclude any negative effects, people should avoid it as much as possible.

Lastly, it is not recommended for children and pregnant or lactating women.

The first step in treating (and preventing) heavy metal toxicity is to identify the toxic elements and start the removal process.