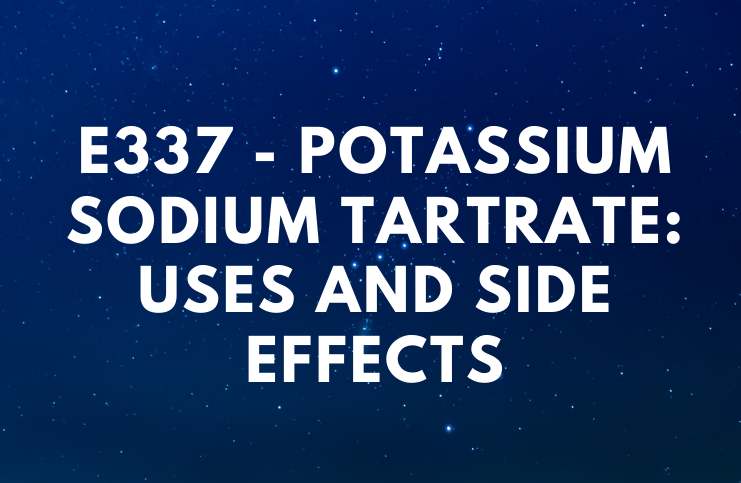 Potassium sodium tartrate is a salt of tartaric acid, which also acts as an acidity regulator because its crystals have the capacity to retain water, and partly react to it.

It is an acid that is found naturally in fruits, particularly grapes. It can be produced industrially by chemical synthesis and is found as a white powder.

This food additive is used in the food industry as an antioxidant, acidity regulator, emulsifier, stabilizer, etc.

E337 is found in many foods. It is used according to the specified amounts in the recipes for products based on chocolate and cocoa, in jams, jellies, marmalades, fruit juices, and nectars or juice concentrates and nectars, gum, etc.

It is not allowed in foods for infants and young children.

The acceptable daily intake for human consumption is up to 30 mg/kg. High doses cause gastrointestinal disorders (refers to diseases involving the gastrointestinal tract, namely the stomach, esophagus, large intestine, small intestine, and rectum), with laxative and diuretic effects.

Moreover, is it not recommended for people with heart problems or hypertension (high blood pressure).

People with kidney impairment should also avoid E337 (renal impairment means that your kidneys are not functioning normally).

It is however much less toxic than E334 tartaric acid.

Given the stated dose (rather small), we can conclude that this food additive is not very safe and so we recommend that you avoid foods containing it.

FacebookTweetPinPrint
SEE ALSO:  Nasacort vs Rhinocort – Which Is The Most Effective Nasal Steroid?