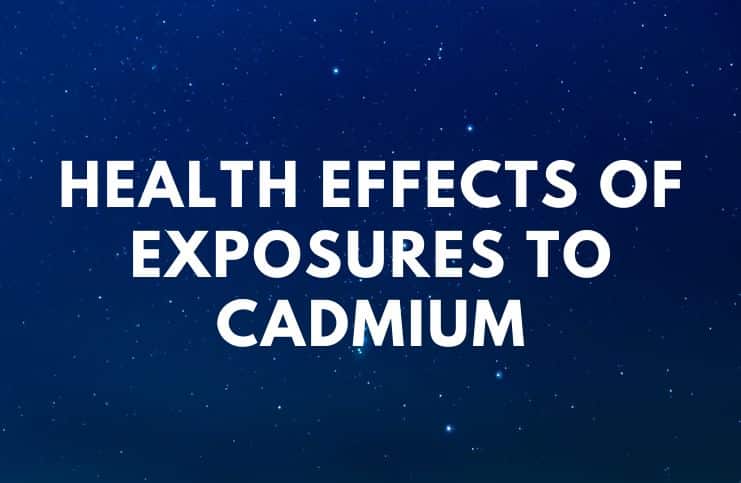 Cadmium is a chemical element that is extremely dangerous to human health is present all around us: at work, at home and quite often, even on our plates.

It is the metal used to give color to salmon, to color the soda cans, to glue jewelry or manufacture batteries of our everyday gadgets.

All this even if it is a known fact that this metal is generally associated with cancer, and the remedy for treating Cd poisoning is still unknown.

It is a chemical element in the group of transition metals, with symbol Cd, atomic number 48 and atomic mass unit 112.41. It is a waste product from processing zinc. It is found in nature only in the form of chemical combinations (zinc, copper, and lead).

It is found everywhere in the environment, from natural sources and processes, such as erosion and abrasion of rocks and soils, to isolated events, such as forest fires and volcanic eruptions. The main use of Cd, about 50%, is in the process of electroplating other metals, mainly steel, iron, and copper.

It is used to make alloys (nickel, copper, gold, silver, bismuth, and aluminum) and has a low melting point. It is most commonly used in the manufacture of nickel and Cd batteries, rechargeable batteries found in mobile phones, and wireless equipment.

The compounds of Cd are used in various areas: printing, textile industry, photography, in lasers, semiconductors, in pyrotechnics, in solar cells, in scintillation counters, as neutron absorbers in nuclear reactors, in dental amalgams, in the manufacture of fluorescent lamps, in jewelry, engraving, in the automotive and aircraft industry, as pesticides, as polymerization catalysts, etc.

About 10% of Cd consumption is produced from secondary sources, mainly from dust generated by iron and steel scrap recycling. Of course, a large amount of cadmium is released into the environment, about 25,000 tons per year.

The Effects of Using Cd On The Environment And On Human Health:

The main access way of Cd into the environment is through the air. It reaches the air as particles after emissions from waste incineration, emissions from the metallurgy. Cd exposure occurs mostly in workplaces where Cd products are made.

People who work in foundries, mining, textile industry, Cd alloy manufacturing, jewelry, stained glass manufacture, waste recovery industry, manufacture of batteries, present a high risk of exposure to Cd. Exposure from ingestion occurs when the food and water are contaminated by this metal.

Increased Cd emissions from the production, use, and storage of waste, long-term persistence in the environment, relatively rapid absorption, and accumulation of cadmium in crops subsequently consumed, contribute to its dangerous potential. Soils can be contaminated by air, water, fertilization, or using pesticides containing Cd, or discharge of waste containing this metal.

High concentrations of Cd in the soil can influence the processes of micro-organisms and threaten the entire ecosystem of the Earth. In aquatic ecosystems, Cd can accumulate in mussels, oysters, shrimp, crabs, and fish.

Inhalation and ingestion are the two ways by which people come into contact with cadmium. On a short period of time, the air containing high levels of cadmium causes states similar to flu, chills, fever, and muscle aches.

Later, it can cause lung diseases, shortness of breath, chest pain, and cough, which can lead even to death in severe cases. Breathing air with lower levels of Cd over a long period of time can lead to kidney and bone diseases.

Eating foods or beverages contaminated with high levels of Cd can cause stomach irritation, abdominal cramps, nausea, vomiting and diarrhea, headache, sore throat. High amounts of Cd can damage the kidneys, liver, and heart and, in severe cases, can cause death.

Children exposed to cadmium have the same symptoms as adults. Small amounts of Cd are found in the breast milk of women who have been exposed to an environment with high levels of cadmium. The concentration of Cd in a newborn is on average 50% lower than in the maternal blood.

According to several studies, the adult body absorbs between 1.4-8 µg of Cd per day. It seems that the absorption of this metal in the body tends to be higher in women than in men.

Approximately 80-90% of the Cd in the body is closely related to metallothionein, a cytoplasmic protein that has the ability to block the systemic absorption of copper and whose intestinal production is stimulated by zinc.

Other health effects caused by the presence of Cd in the body are: reproduction difficulties and even infertility, damage to the immune system, mental disorders, and possible DNA damage or cancer development.

In the case of acute Cd poisoning, the patient should be removed as quickly as possible from the contaminated area or induce vomiting. There is no proven effective treatment for Cd poisoning.

“Itai-Itai” disease was first recorded in 1912 in Toyama, Japan, and made over 200 victims. This disease is one of the best-known conditions in Japan caused by pollution. This metal was poured into rivers by mining companies in the mountains.

Due to Cd contamination, fish in the rivers began to die and rice plantations were affected because they were irrigated with water from rivers contaminated with cadmium. Rice absorbs heavy metals, particularly Cd, and thus it enters the human body.

The disease is characterized primarily by unbearable pain in the spine and feet and, in time, the person begins to waddle along due to the deformed bones. These symptoms persist and advance in a few years until the patient becomes unable to move and thus remains bedridden.

The famous red color on labels and advertisements of Cola beverage contains this metal.

Heavy metals found in batteries, such as mercury and cadmium, once in the water, are swallowed by aquatic animals and accumulate in their fat tissues.

There are warning signs that salmon could contribute to the activation of human cancer, due to substances used in treating farmed fish that subsequently reach the waters of the fjords.

Among consumers of salmon, word spread that in some farms the salmons are “reddened” artificially with cadmium.

This is because, astaxanthin (the substance used to feed the fish), which is an artificial chemical carotenoid, is too expensive. In their natural habitat, salmon get this substance by eating shrimp. Thus, Cd is used as a replacement because it is much cheaper, but it is much more toxic.

According to reports, Liquid Zeolite Enhanced with DHQ removes toxic heavy metals, like – mercury, lead, cadmium, arsenic, and other toxins from the body without affecting the levels of minerals such as – magnesium, calcium, or zinc.