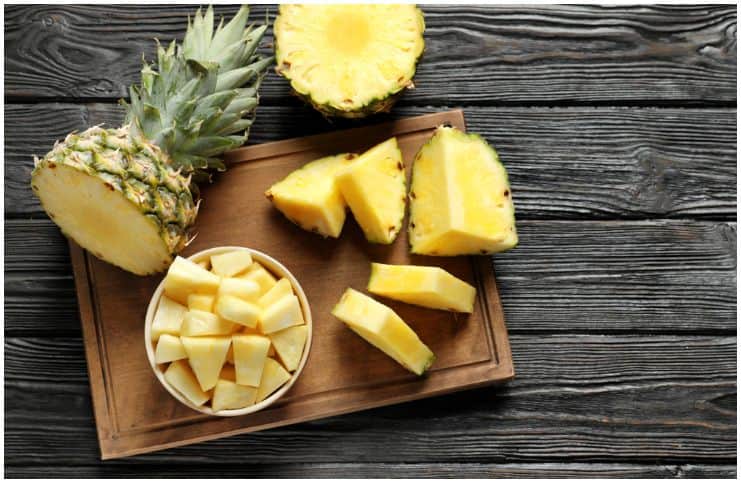 Bromelain, also called „pineapple extract”, is a protein extract derived from the stems of pineapples, although it exists in all parts of the fresh plants and fruits, the stem is the most common commercial source.

Pineapples have a long tradition as a medicinal plant among the natives of Central and South America.

Its first isolation was recorded by Vicente Marcano, a Venezuelan chemist, in 1891 by fermenting the fruit of the pineapple.

It is a natural anticoagulant that works by breaking down the blood-clotting protein fibrin.

The enzyme is commonly touted as a natural remedy for the following health problems: angina, allergies, asthma, muscle soreness, bronchitis, chronic pain, nasal swelling, sinusitis, osteoarthritis, ulcerative colitis and inflammation from infection and injuries. furthermore, along with papain, it is one of the most trendy proteases to use for meat tenderizing.

It was approved in Europe as an effective remedy for swelling after surgery. Studies show that the bromelain enzyme may lower swelling, speed up healing time, stop bruising, and reduce the discomfort in individuals following surgical procedures.

One double-blind study of over 150 women who received surgical cuts in the perineum (episiotomies) during childbirth, found that women given large servings of oral bromelain over a period of three days, starting four hours after delivery, showed a huge decrease in swelling and discomfort.

Moreover, 90% of women taking the supplement showed good recovery compared to 44 percent of women in the placebo group.

Increases the effect of antibiotics

It may also enhance the effect of erythromycin, amoxicillin, penicillamine and penicillin. In a study of people with urinary tract infections, 100 percent of participants given antibiotics in combination with this supplement and another enzyme called trypsin, were cured of their infection, compared with just 46 percent of people who received antibiotics alone.

In a study published in QJM: Monthly Journal of the Association of Physicians in 2006, supplements with this enzyme appeared to be no more effective than a placebo in easing symptoms such as pain and stiffness in people with osteoarthritis of the knee. The 12-week-long study involved 47 subjects with moderate to severe knee osteoarthritis.

Another study concluded that this enzyme may ease knee pain in people without arthritis. This study includes a small study published in Phytomedicine in 2002.

In their analysis of data on 77 healthy adults with mild acute knee pain, the study’s authors found that 1 month of treatment with the supplement considerably relieved symptoms and improved physical function.

There are studies that suggest it may help reduce coughing and lessen mucus related to sinusitis, as well as reduce the redness and swelling that accompany hay fever.

The German Commission E approved the enzyme for aiding imbalances of the nose, ear, and throat that occur after surgery. In addition, it is also approved for reducing general sinus infection swelling.

SEE ALSO:  MiraFiber vs Citrucel For Diarrhea - Comparison of Benefits & Side Effects

The investigators concluded that their findings justified further researches of the enzyme in the management of inflammatory bowel disease.

They are also known as piles, are inflamed and swollen veins in your lower rectum or around your anus. Approximately 10 million people in the United States experience this condition every year.

Worldwide, the overall prevalence of piles in the general population is around 4.4 percent. This powerful enzyme has been used in alternative medicine to reduce the symptoms for hemorrhoids and other conditions of the veins.

A German study of 16 breast cancer patients found that oral supplementation with this supplement could help stimulate immune function in women.

Other researchers suggest that it may also boost the volume of certain immune system hormones, called cytokines, and affect the behavior of other cells.

Side effects of bromelain

The side effects are generally mild and include vomiting, nausea, diarrhea, and excessive menstrual bleeding.

This supplement is not recommended for people with active gastric or duodenal ulcers. At higher doses, supplements containing this enzyme may increase heart rate, thus, it is recommended to be used cautiously in patients with heart disease.

Furthermore, individuals who are allergic to pineapples, wheat, latex, celery, papain, fennel, carrot, cypress pollen, or grass pollen may also be allergic to this enzyme.

Individuals taking anticoagulant drugs such as warfarin, should not take it without consulting their physician.

Doctors recommend taking up to 3,000 MCU three times a day for a few days and then lessen the dosage to three daily 2,000 MCU doses.