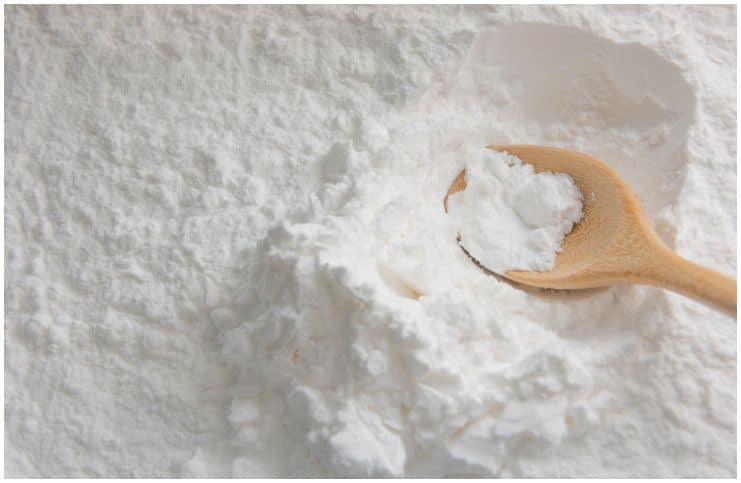 Starch is a polymeric carbohydrate which consists of a large number of glucose units joined by glycosidic linkage (also known as glycosidic bonds).

It is synthesized by the majority of vegetable cells and stored in tubers (e.g. potatoes), seeds (e.g. legumes and cereals), some fruits (e.g. green banana), and roots (e.g. carrots).

The quantity of starch contained in grains varies. For instance, it is approximately 70 percent of the weight of the grain and provides around 75 percent of the calories consumed by humans in the world.

To be easily digested and to have a fine flavor, foods rich in starch must be cooked thoroughly. This is due to the fact that starch occurs in foods in the form of hard, tiny, dry grains that are not soluble in water, plus, they are difficult for the digestive juices to act upon.

Resistant starch is created when some starchy foods (like – rice, legumes, and potatoes) are cooked and then cooled. It is a good source of prebiotics. Prebiotics are a type of dietary fiber that feeds the healthy bacteria living in the large intestine.

Amyloplasts (non-pigmented organelles) are responsible for all starch synthesis in plants. Amyloplasts are found in plant parenchyma tissue, that composes the middle layer of leaves, the inner and outer layers of roots and stems, and the soft tissue in fruits.

It is a carbohydrate, made by many little sugars all connected together. Glucose is the sugar used to build starch. It can contain anywhere from 500 to a few hundred thousand glucose molecules joined by covalent bonds into a single structure. Because it is made of many glucose molecules bound together, it is also called a polysaccharide.

The bonds between glucose monomers can be broken by hydrolysis carried out by an enzyme.

Regarding its dietary function, the only purpose of starch is to change into glucose to be used as useful energy by the human body. It is also used to increase the strength of paper.

It is a complex carbohydrate consisting of about 3,000 (or more) glucose units.

It is the most abundant natural polymer on our planet and is an essential structural component of the cell wall of numerous plants and is what makes plant stems, leaves, and branches so strong.

It is considered an almost inexhaustible source of raw material for the demand of biocompatible and environmentally friendly products.

This is actually the same glucose your body metabolizes in order to live, however, you can’t digest it in the form of cellulose. It was discovered in 1838 by Anselme Payen, a French chemist, who isolated it from plant matter and determined its chemical formula.

Protozoans (single-celled eukaryotes) in the gut of insects like termites can digest this complex carbohydrate. In addition, herbivorous animals can digest cellulose since they retain it longer in the in the alimentary tract for the microorganisms to break it. However, it is nondigestible for humans.

It is a polysaccharide composed of glucose monomer units (similar to starch – at least 500 glucose molecules) and, together with other materials like – lignin and hemicellulose, it is the main constituent of plant cell walls.

Its molecules are held together by hydrogen bonds to create microfibrils and these form cellulose fibers. These fibers are arranged in a very specific way and can be described as being like a fractal.

It is used to make nitrocellulose (a highly flammable compound used in lacquers and explosives) and as a binder in the process of building medicinal tablets. According to how it is treated, it can be used to make film, paper, and plastics.

Moreover, it is very useful for fitting around items in walls like wiring and pipes leaving few air pockets which can lower considerably the overall efficiency of the wall. As a matter of facts, cellulose insulation helps make homes safer by providing about 50 percent better fire resistance than fiberglass.

In the human intestine, it acts as an insoluble fiber that can absorb water, therefore, it can increase the bulk of the stool. It cannot be digested but can be partially broken down by the good gut bacteria into short-chain fatty acids (especially butyrate) that can be used by the body.

According to research, there is a strong association between a high-cellulose diet and a low risk of colon cancer. Another type of dietary fiber, called soluble fiber, does bind with water and becomes a gel-like consistency in your stomach. Soluble fiber helps the human body improve blood sugar control, that can help in lowering the risk of type 2 diabetes mellitus.

Like cellulose, starch is formed of glucose units connected together by oxygen bridges. The main difference is the orientation of the molecules in that linkage. Also, the starch molecule is flexible, while the cellulose molecule is rigid.