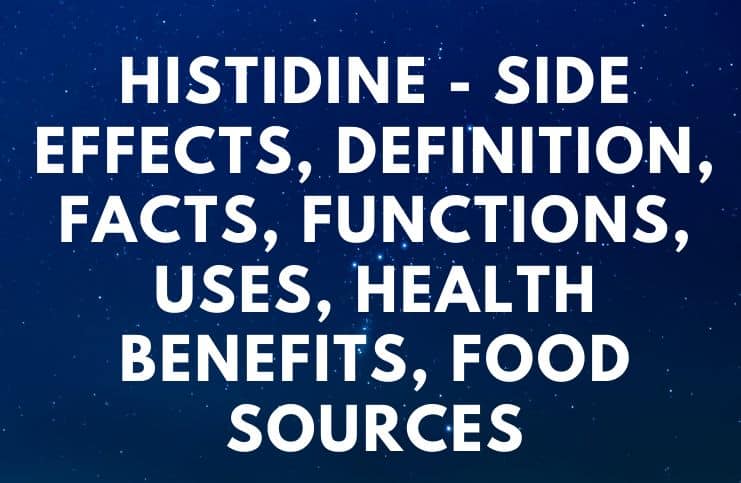 Histidine (abbreviated as His or H) is a non-essential amino acid for adults but essential for children, as their body can not synthesize it.

Children, in particular, need additional sources of this amino acid, either from breast milk, special supplements or special fortified milk for infants, since deficiencies can lead to growth problems or other ailments.

It is an essential substance for those recovering from illnesses or during development (during childhood or adolescence). It is recommended to consume it on an empty stomach because it proves to be very effective.

An unbalanced diet and too much stress can lead to a histidine deficiency, which can manifest in growth disorders or rheumatoid arthritis in adults.

A minimum daily dose is 1,000 mg and the optimum is 8-10 mg/kg body weight. Chances are you already have a double or triple amount in the diet.

It is recommended to store the food in sealed containers and keep it away from sunlight, because UV radiation and oxygen can destroy the H content, thus reducing its nutritional value.

1. It is involved in the metabolic reactions

One of the most important features of this amino acid is that it can be converted into a variety of substances, including histamine (a substance that is released by the immune cells during an allergic reaction), glutamate, and hemoglobin.

Moreover, it is involved in the metabolic reactions as well, indirectly ensuring the oxygen stock necessary for the functioning of organs and tissues. It also represents a basic element in the development of many molecules that contain iron (ferritin for example).

This function is equally important because it provides sufficient energy required by cells and can detoxify the body from heavy metals by its ability to combine with them.

2. It adjusts the blood’s pH

Other functions performed by this amino acid include regulating blood pH values, support in treating wounds, adjusting development, and natural healing mechanisms. Without it, development processes would be interrupted and its absence can lead to slow development and regeneration of tissues.

It is also possible that a deficiency of this amino acid can lead to an inflammation of the skin and mucous membranes and slower recovery from surgery and surgical procedures.

3. It protects cells and supports the immune system

Among others, it is also necessary for the formation of the myelin sheath, that surrounds all nerve cells and protects them against damage and can even be used for preventing certain degenerative diseases such as Alzheimer’s and Parkinson’s.

Furthermore, this semi-essential amino acid is involved in the synthesis of red and white blood cells, thus influencing the activity of the immune system because leukocytes play an important role in fighting pathogens.

4. It provides protection against free radicals

It can protect the body against the damage caused by free radicals, binding to the affected molecules and thus eliminating them. For this reason, a specially created preparation containing L-histidine can be administered before medical treatments that involve ionizing radiations, in order to protect the body from direct and indirect effects of radiation.

In addition, this amino acid may be therapeutic in cases of inflammation and can be used as a treatment for arthritis, but also in fighting the symptoms of various allergies.

When consumed together with vitamin B3 (niacin) and vitamin B6 (pyridoxine), it can enhance sexual pleasure by increasing levels of histamine in the body.

The preventive and therapeutic potential of this amino acid is yet to be fully explored, although numerous studies have already been conducted and managed to prove the effectiveness of these vital substances in medical treatments.

It can lower blood pressure. The discovery of its effectiveness in lowering blood pressure levels was one of the basic moments that confirmed the necessity of histidine.

Another area in which H supplements have proven to be effective is the treatment of kidney failure, an extremely common condition among the elderly.

A low concentration of H in the blood plasma increases the body’s inflammatory activity and can lead to an increase in oxidative stress. Thus, supplementation with this amino acid is associated with lower mortality rates.

A study involving more than 40 participants has been conducted in order to investigate whether a combination of zinc and L-histidine might reduce the duration of viral and bacterial infections.

The researchers concluded that the consumption of these vital substances taken together shortens the common cold with an average of 3.6 days.

How is this amino acid useful to people who practice sports?

It is the precursor of carnosine, with whom it has the duty to increase inside the muscles, making it extremely useful for those who practice explosive sports, such as sprinting and lifting weights.

High-intensity workouts cause oxidative stress in the muscles, leading to decreased levels of carnosine. Free radicals produced by these highly intense exercises cause lipid peroxidation and also protein and phospholipids carbonylation.

This determines the proteins to break down in a process called proteolysis. Studies show that it is possible to fight against these reactions if muscles contain enough carnosine.

The biosynthesis of carnosine depends on the amount of beta-alanine and H in the body. A deficiency of this amino acid reduces carnosine levels in the muscles.

Side Effects of Histidine

Since this amino acid has a proven effect on the central nervous system and the production of histamine, people suffering from manic depression (bipolar) should not consume supplements that contain it before seeing their doctor.

Moreover, anyone who suffers from kidney or liver diseases should see their physician prior to using these supplements.

The use of this amino acid can unbalance nitrogen levels in the body, and also disrupt the citric acid cycle (Krebs cycle), through which toxins from the liver and kidneys are eliminated.

This amino acid levels in the body must be balanced in order to ensure physical and mental health. High levels of this amino acid have been linked to psychological disorders, such as anxiety and schizophrenia.