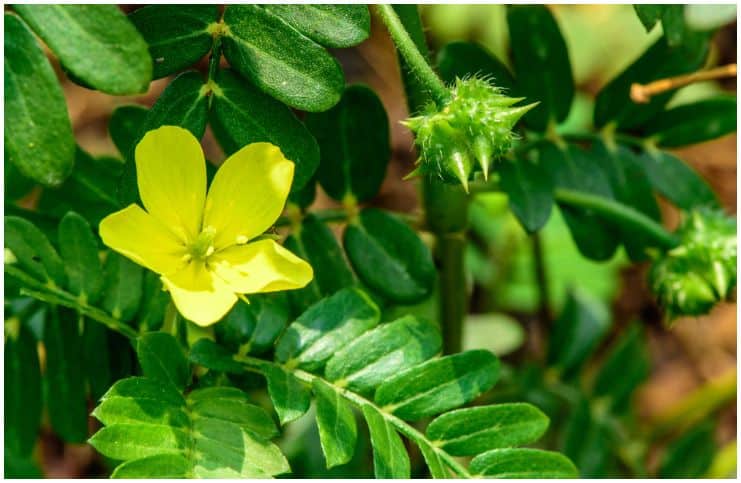 Also known as devil’s weed, Tribulus Terrestris is a type of herb used by ancient Indians and Chinese as a traditional medicine.

Eastern European Olympic athletes claimed that TT helped them in their performance. Since then, this plant became a favorite in many male health supplements as a testosterone booster and libido enhancer.

This herb has also been used for hundreds of years by the Chinese and in India for treating a wide array of illnesses and conditions such as improving moods, impotence, and for general improvements to one’s health.

TT is used as a powder form of the aerial parts, especially the fruits, and it is known in Sanskrit as gokshura, meaning the “cow’s hoof.”

Gokshura is considered to contribute to overall physical, as well as sexual, strength by building all the tissues, particularly the reproductive tissue, but it is not considered as a particular sexual function herb.

In addition, this herb is considered to be useful in bladder, liver, kidney, urinary tract, and urogenital related conditions, where it is said to act as a diuretic.

It has also been used traditionally for nervous constipation, disorders, and to stimulate the central nervous system and for the treatment of some types of headaches.

According to a 2005 study by the National University of Singapore, Singapore, involving rats, the plant’s supplementation showed an increase in the androgen receptor immunoreactivity, thereby altering the androgen signaling.

This produced an increase in NOS (Nitric Oxide Synthase) and a subsequent increase in nitric oxide production.

An interesting aspect of this supplement is that it has been shown to increase libido in females as well. Women who take it regain regular ovulation, they gain improved fertility, it can cause menopausal symptoms to disappear and they commonly experience few or no mood swings.

Refers to semen with a low concentration of sperm and is a usual finding in male infertility, and is responsible for about 8 to 12 percent of infertility in couples worldwide. TT is frequently used as an aphrodisiac to boost infertility and sexual dysfunction in men.

This plant has been demonstrated in studies to help with the cleaning up all these toxins and also expanding blood vessels for better blood supply throughout the body.

There are several active components in TT, including the steroidal saponins protodioscin and protogracillin.

They have been demonstrated to possess anti-viral (particularly anti-herpes) and anti-bacterial effects. Bulgarian TT may be used externally and internally to treat herpes and virus infections such as the common cold and influenza.

This plant is also known to stimulate the liver, therefore it can aid in the breakdown of fats and cholesterol into hormones and energy resulting in increased stamina and physical performance.

May help protect against diabetes

In the past four decades, the prevalence of type 2 diabetes mellitus has risen dramatically.

The fact that TT may fight diabetes is a statement suggested by an animal-based study published in the Annals of the New York Academy of Sciences in 2006. In this study, tests on rats concluded that TT supplement may protect against diabetes by inhibiting oxidative stress.

The usual dosage of TT supplement is between 85 to 250 mg 3 times/day, with meals or as recommended by the supplement producer.

Side effects of Tribulus Terrestris

There are no published reports of serious adverse side effects associated with TT supplement use. However, individuals with hormone-dependent conditions, such as prostate or breast cancer, should not use the herb.

Research suggests it can increase prostate size. Side effects such as agitation, anxiety, restlessness, and difficulty sleeping may occur with overdose.

Breastfeeding or pregnant women should consult with their healthcare specialist before taking this supplement. Furthermore, those scheduled for surgery should discontinue using TT at least 2 weeks before surgery. This is because TT can interfere with blood sugar control during and after surgery.