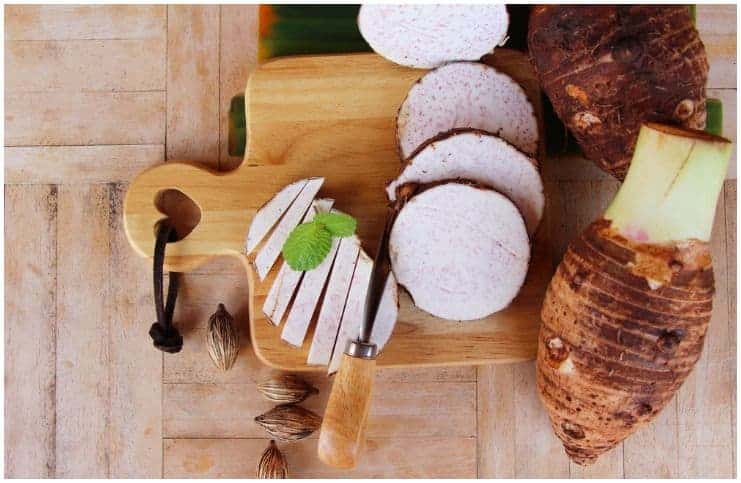 Taro root is a popular starchy edible root in large parts of the Pacific Islands, Asia, West Africa, and Amazonian regions of South America. In the Solomon Islands, archaeological studies indicate the usage of taro root as early as 28,000 years ago.

It has a global culinary presence though. Over 10 percent of the world’s population uses it as a food staple.

This plant was extremely important to the Hawaiians, who associated it with their Gods and their story of creation, using it for medicinal purposes and it is even the theme of an annual food festival.

It is a perennial, tropical plant mainly grown as a root vegetable for its edible starchy corm, and as a leaf vegetable.

The leaves are one to two meters long with a long, erect petiole and an arrow-shaped blade. Plants like this are sometimes called „elephant ear”.

It has been named „the potato of the humid tropics”. Although it’s a bit higher in calories than a potato, it has more of the essential nutrients to make up for the extra digits.

It contains vitamin A, B2, B3, B6, C, E and K, and minerals which include calcium, magnesium, iron, selenium, zinc, phosphorous, potassium, manganese and copper. The plant also provides protein (3%) and dietary fiber (10%).

The roots and leaves can be used as dietary ingredients, but the plant must be cooked. Raw leaves are toxic however and must be cooked or soaked for several hours before safely consuming.

This plant contains a good amount of dietary fiber that is beneficial for the digestive process. This gives you a feeling of being full for a longer time even after a small meal. In addition, dietary fiber increases the size and weight of your stool and softens it.

A bulky stool is easier to pass, lowering your chance of constipation. If you have a loose, watery stool, dietary fiber may help to solidify the stool because it absorbs water and adds bulk to it.

Another really important role of it is that some fibers are prebiotics, which means they are fermented in the colon by the healthful beneficial bacteria.

The root is a low glycemic index food. This means it breaks down into glucose in the liver very slowly, hence making it great for lowering blood sugar too, which means that it does not cause blood sugar levels to spike after consumption.

It has a low percentage of fat and no bad cholesterol (LDL), thus it promotes the heart’s health by preventing the hardening of arteries.

Antioxidants that block the oxidative modification of LDL have been shown to slow the progression of atherosclerosis in animal studies. Moreover, the antioxidants keep cholesterol from going through a process called „oxidation”.

Oxidation happens when oxygen reacts with cholesterol in your blood. Furthermore, this also provides a number of important minerals such as magnesium, zinc, copper, iron, and manganese, all essential nutrients for cardiovascular health.

Certain vitamins have anti-aging qualities that improve not only your appearance but also your health in a number of ways.

The root contains 20% carbohydrates, which are the fuel that makes the body’s engine run, and athletes need enough carbohydrates before, during, and after exercise.

The body generates energy from carbohydrates much more rapidly than it does from fat, and the central nervous system and brain rely exclusively on carbohydrate for fuel.

Athletes who train hard know that they need to properly fuel up before starting out in order to keep the good carbs coming in during activity and to refuel properly afterward.

The leaf juice is used to treat piles and as a laxative in some traditional medicines systems, while in Hawaii poi (starchy Polynesian food paste made from the taro root) is mixed with arrowroot for diarrhea.

Precaution and side effects

This root contains calcium oxalates in the form of needle-shaped crystals. This produces irritation and a burning sensation if the vegetable is handled or eaten raw.

Therefore, the use of gloves is sometimes suggested when preparing it and long cooking is necessary to destroy these harmful substances.