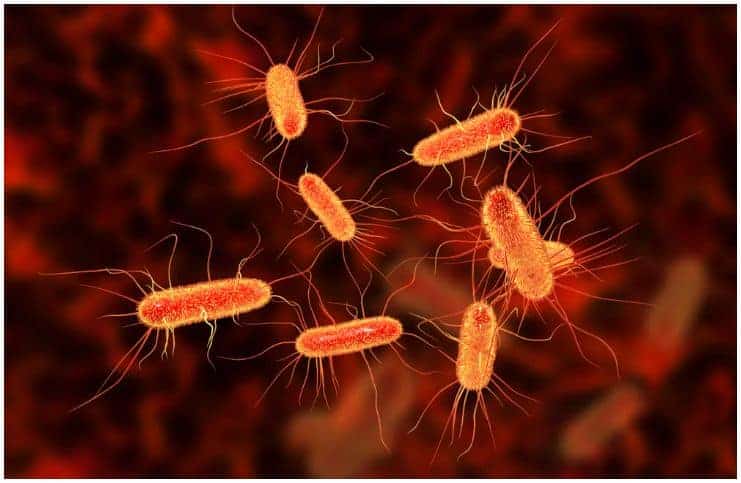 It is an extremely common type of bacteria. There are more than 2,500 strains of this type of bacterium, however, only less than 100 are responsible for the human infections.

Some types may also cause typhoid fever, a potentially fatal multisystemic illness. The two most common types in the United States are S. Enteritidis and S. Typhimurium. Salmonella poisoning (Salmonellosis) affects more than 1.4 million Americans per year and is responsible for about fifty percent of the bacterial infections in the US.

This bacterium usually lives in human and animal intestines and is shed through feces. Also, fruits, green vegetables, and shellfish can become contaminated with this bacterium through contact with sewage in the water or manure in the soil.

The symptoms may start a few hours after an individual swallowed an infectious dose of this bacterium. The time period before symptoms occur is known as the ”incubation period.” In some patients, symptoms don’t show up until 3 days later.

This infection usually occurs from consumption of eggs (FDA estimates that there are about 80,000 cases of foodborne illness in the United States per year due to eating eggs containing this bacterium), raw meats, contaminated foods, like – unpasteurized milk, vegetables, and fruits.

Moreover, terrapins and tortoises are common carriers of this bacterium. Therefore, contact with these animals (especially their stools) can allow transmission of infection to humans.

Most people with salmonella do not need any treatment because the symptoms usually improve in a few days.

However, this infection can cause dehydration, the treatment typically focuses on replacing electrolytes (potassium, calcium, magnesium, sodium, chloride, and phosphate) and fluids.

Due to the fact that antibiotics do not appear to reduce the duration of symptoms, plus, they may even prolong the period of the convalescent carriage, they are not used.

It is a type of bacteria which usually live in the intestines of animals and people. It can be transmitted by contaminated water and food and person-to-person.

Most strains are actually a part of the beneficial gut flora in the human gut. However, some types can cause illness in humans, including abdominal pain, diarrhea, vomiting, and fever.

This bacterium genus is named after Theodor Escherich, a German-Austrian professor and pediatrician, who isolated the type species of the genus.

The incubation period can range from four to 8 days. The symptoms are worse in children and seniors, and particularly in individuals who have another condition. A person who has this type of infection may experience these symptoms:

Some kinds of Escherichia coli bacteria cause disease when they make a toxin called Shiga toxin. Also, a small number of individuals with this infection may develop a life-threatening condition called hemolytic-uremic syndrome.

This infection most commonly happens when someone consumes unpasteurized cheese or milk or undercooked meat.

Other methods of being infected with this bacterium include:

Treatment for this infection commonly involves drinking a lot of water to avoid dehydration and plenty of rest.

Antibiotics are not recommended to treat this infection since they can increase the risk of serious complications. Moreover, avoid taking anti-diarrheal meds because they slow the digestive system down, which actually prevents the body from removing the toxins.

Prevention usually consists of avoiding eating or touching any food which may be contaminated with any human or animal waste. Also, eating well-cooked foods, particularly hamburger as well as drinking pasteurized or treated fluids will also prevent this infection.

Both these gram-negative bacteria live in the intestines of animals and people.

The symptoms caused by these bacteria usually resolve within a few days, but E. coli typically lasts a bit longer, plus, it can lead to life-threatening complication. Moreover, both do not require antibiotics for treatment.