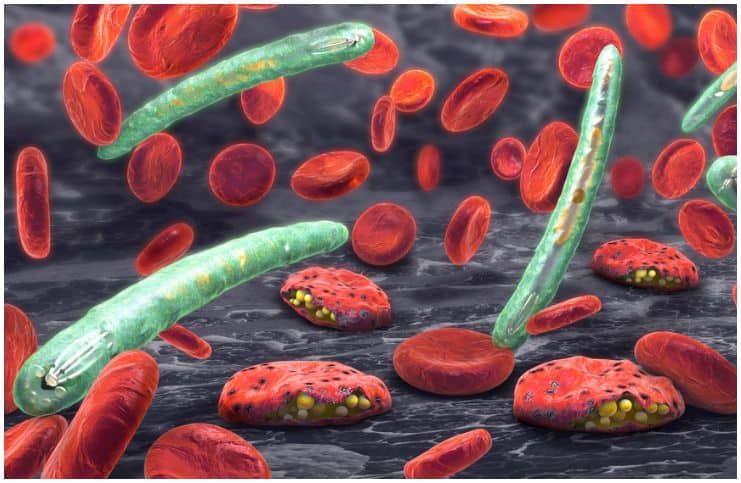 It is a life-threatening disease that is caused by parasites which are transmitted to adults and children through the bites of infected female Anopheles mosquitoes.

Worldwide, about 3.2 billion people in 95 territories and countries are at risk of being infected with this disease and 1.2 billion are at high risk. Approximately 438,000 people died of this condition in 2015, according to the World Health Organization.

90 percent of deaths due to this infection occur in Africa. For example, it accounts for about 20 percent of childhood deaths. Also, it contributes considerably to anemia among children.

This infection was eliminated from the United States in the early 1950s. Nevertheless, about 2,000 cases still occur every year, in people who have traveled to malaria-endemic areas.

Within 48 to 72 hours, this parasite inside the erythrocytes multiplies, causing the infected cells to burst open.

There are 5 species of the Plasmodium parasite that can cause this condition in humans:

It is found mainly in the subtropics and tropics (near the equator) and usually has a short incubation period (up to two weeks).

It is mainly found in South America and Asia and causes milder symptoms than P. falciparum, however, it can stay in the liver more than 3 years, that can result in relapses. The incubation period for Plasmodium vivax is typically 10 to 17 days.

It is generally considered to have a relatively limited distribution, being limited to areas of New Guinea, tropical Africa, the Philippine, and the eastern parts of Indonesia.

It is the one of the least studied of the species of this parasite which infect humans, due to its milder clinical manifestations and low prevalence.

It is usually found in the Philippines, Malaysia, and Southeast Asia, and can cause high levels of parasites in the blood. P. knowlesi infection can lead to organ failure or death.

It is treated with anti-malarial drugs given by injection, by mouth, or intravenously, depending on the type of parasite causing the infection.

The risk of this infection can be considerably lowered by preventing mosquito bites through the use of insect repellents and mosquito nets as well as draining standing water.

It is a viral infection spread by Aedes aegypti mosquito. More than 200,000 individuals people become infected per year, according to the World Health Organization. It is common in sub-Saharan Africa and South America. 1905 was the year of the last major outbreak in the United States.

The period of time from contracting the infection to the development of signs and symptoms is typically between 3 to 6 days. They include:

Most patients make a full recovery after 3 or 4 days. However, a small percentage of sufferers enter the second phase within 24 hours of recovering from the first signs and symptoms.
Symptoms in the 2nd phase may include:

Approximately 50 percent of the patients who enter the second phase die within two weeks, the rest recover without notable organ damage.

You can develop this condition if you are bitten by Aedes aegypti mosquito infected with this virus, a single-stranded RNA virus which belongs to the Flavivirus genus.

Infected people cannot spread this infection to other people through casual contact, however, it can be transmitted into the blood through contaminated needles.

No treatments have been found to benefit sufferers with this condition. Nevertheless, patients should be hospitalized for supportive care to help reduce a high temperature (by drinking plenty of fluids to avoid dehydration) and muscle pain (using ibuprofen or paracetamol).

Methods to prevent this infection include wearing protective clothing and using insect repellent. Also, stay away from areas that have a large mosquito population and standing bodies of water. In addition, wear long pants and long-sleeved shirts when outdoors.

SEE ALSO:  LSD vs Weed - Comparison of Benefits & Side Effects

Both are transmitted by mosquitoes (although different ones), however, yellow fever is caused by a virus and malaria is caused by a parazite – plus, it can be deadly.