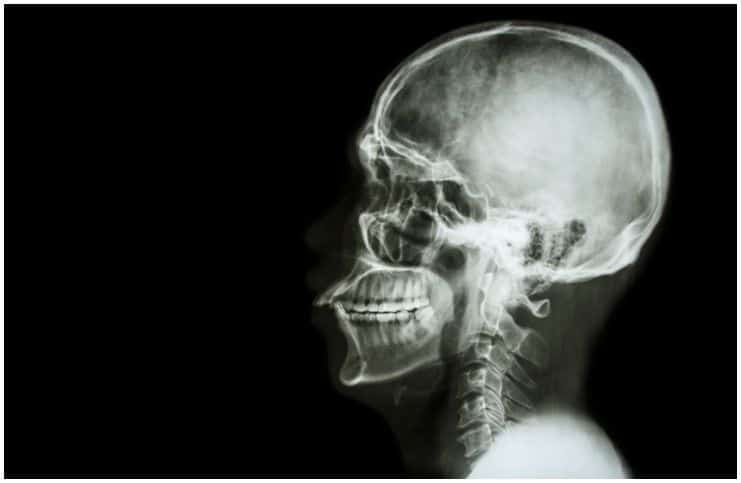 The skull is a complicated mechanical construction that consists of 28 bones, connected by sutures of different structural types – from teeth-like hardness to smooth (face cranium).

The neurocranium forms the cranial cavity which protects and surrounds the brain. It is formed from the occipital bone, two parietal bones, two temporal bones, ethmoid and frontal bones, and the sphenoid.

Every skull has a unique shape and many have dents. Below are 7 causes of a dent in the skull:

Trauma to the head can cause different surgical and medical problems, ranging from mild to severe. Every year, head injuries result in tens of thousands of emergency hospitalizations and room visits in the US.

Head injuries caused by a blow to the head are typically associated with:

Metastatic cancer is a type of cancer that has spread from the part of the body where it started to other parts of the body. Metastases to the skull are very frequent in people with a disseminated skeletal metastatic disease, however, they are usually asymptomatic.

Cancer cells which spread from other parts of the human body can form 2 main types of bone tumors:

Congenital depressions of the neonatal skull are rare in Western countries. According to statistics, they occur in 1 in 10 000 neonates.

The precise cause is usually unknown, however, it has been suggested that, due to the cartilaginous nature of the fetal skull, compression by maternal pelvis or fetal limbs during delivery could result in skull deformation.

Note – theoretically, a depression of more than 5 mm may impinge on the cerebral cortex, leading to localized compression of the brain with resultant decreased blood flow and cerebral edema.

Chiari malformations are structural defects in the base of the skull and cerebellum. This results in compression of parts of the spinal cord and brain, that disrupts the normal flow of cerebrospinal fluid.

More exactly, when part of the cerebellum extends below the foramen magnum (a large oval opening in the occipital bone of the skull) and into the upper spinal canal, it is called a Chiari malformation.

The prevalence in the general population has been estimated at one in 1000. The majority of these cases are asymptomatic. However, when symptoms occur, they may include:

#5 Lipoma on the Scalp

Another possibility of a skull dent is that you have a small cyst or fatty tumor under the skin of your scalp.

Lipoma is a fatty formation, that can be formed subcutaneously, to affect the internal organs and mucous membranes. It is not known exactly what causes subcutaneously lipoma to occur. Nevertheless, middle-aged women and men tend to get them more, plus, they run in families.

Note – they usually do not pose any health danger.

Vitamin A is actually the name of a group of fat-soluble retinoids. Vitamin A is recognized for its effects on cell growth, healthy vision, and immune function.

Note – fruits and vegetables contain carotenoids that must be converted into retinol by the body. Good sources of carotenoids include:

SEE ALSO:  Pro And Cons Of Being A Vegetarian (Athlete Or Sedentary)

Vitamin A toxicity, also known as hypervitaminosis A, happens when you have too much vitamin A in your body.

Note – hypervitaminosis A can only occur if you intake to many animal products or take vitamin A supplements because the body converts only the quantity of retinol it needs from carotenoids.

Signs and symptoms of hypervitaminosis A may include:

Gorham’s disease, also referred to as vanishing bone disease (due to the loss of the affected bone), is a bone disorder described by bone loss, usually associated with abnormal blood vessel growth. Bone loss can occur in just one bone or spread to soft tissue.

The condition is thought to be non-hereditary and can potentially occur in any age group. The symptoms of vanishing bone disease depend upon the specific bones involved. An early sign of the Gorham’s disease is swelling and pain near the affected region without any precise cause.

The spine, ribs, skull, pelvis, jaw, and collarbone are the most frequently affected bones.

In the case of a skull dent, there are a few things that need to be reconstructed for your skull deformity. Typically working with a neurosurgeon and a craniofacial surgeon as a team will help give you the best and safest result.