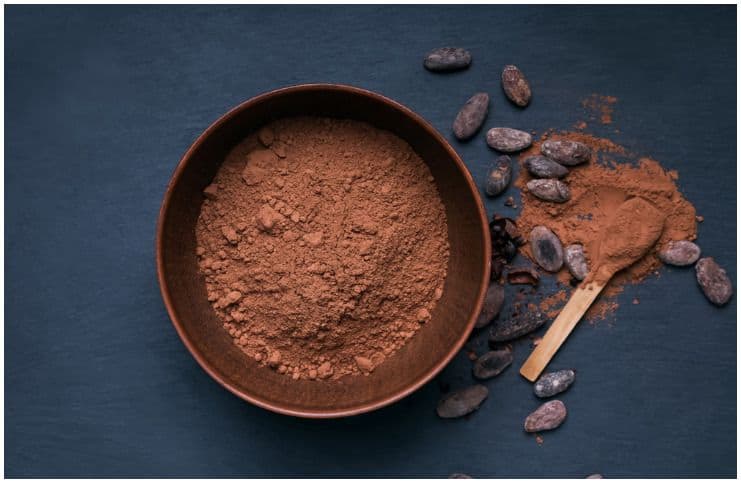 Theobromine, diuretic drug and a major constituent of cocoa, belongs to a class of alkaloid molecules known as methylxanthines. Its chemical formula is C7H8N4O2.

Its name is derived from the name of the cacao tree genus and doesn’t contain bromine (a chemical element, symbol Br), as its name might indicate. It was first discovered in 1841 in cacao beans by Russian chemist Alexander Voskresensky.

It shares a very much alike structure to that of another well-known purine and xanthine derivative, known as caffeine, except it contains one more methyl group. It is also known as Riddovydrin, Riddospas, Santheose, Theobrominum, Seominal, Theominal, and Theoguardenal.

This compound has a bitter taste and is the main ingredient in chocolate. It is mainly found in cocoa beans (approximately 25 g/kg) and consequently in chocolate. Different types of chocolate contain different amounts of this substance.

Furthermore, it is also present in the leaves of the tea plant and cola nuts, Ilex paraguariensis (Yerba mate) and the guarana berry.

It is an overdose reaction to the xanthine alkaloid theobromine. The amount found in chocolate is small enough that chocolate can, in general, is safely consumed by humans. The poisoning may result from the acute or chronic consumption of large quantities of chocolate, particularly in the elderly.

The first signs of chocolate poisoning are vomiting, nausea, diarrhea, and increased urination. Other signs may include hyperirritability, hyperexcitability (an excessive reaction to stimuli), excessive panting, tachycardia (a rapid heart rate), muscle twitching, and ataxia (a lack of muscle coordination).

These signs can progress to epileptic seizures, cardiac arrhythmias, heart attacks, internal bleeding, and eventually death. In the human body, theobromine levels are halved between 6-10 hours after consumption.

Dogs, horses, cats and other animals cannot metabolize theobromine quickly. This causes the above effects to be much more severe than is the case of humans.

The specific notable side effects of toxic levels of theobromine in animals include – vomiting, diarrhea, increased urination, muscle twitching, hyperactive behavior, excessive panting, dehydration, digestive problems, seizures, and rapid heart rate. Some of these symptoms, like the rapid heart rate, can ultimately lead to death.

According to the National Hazardous Substances Database: „It has been stated that „in large doses” it may cause anorexia and nausea and that daily intake of 50-100 g cocoa by humans has been linked with trembling, sweating and severe headache.”

Caffeine and theobromine are similar in that they are related to alkaloids. Theobromine is weaker in both its inhibition of cyclic nucleotide phosphodiesterases and its antagonism of adenosine receptors. Hence, it has a lesser impact on the human central nervous system than caffeine. But, it stimulates the heart to a greater degree.

While it is not as addictive, it has been cited as possibly causing addiction to chocolate. Additionally, it has also been identified as one of the substances contributing to chocolate’s reputed role as an aphrodisiac.

A study conducted in Utah between 1983 and 1986, and published in 1993, showed a possible connection between theobromine and an increased risk of prostate cancer in older men. This connection was not found to be linear for aggressive tumors.

The connection may be spurious but is plausible. Prenatal and infant exposure to theobromine appeared possibly linked with hypospadias and testicular cancer in one population study.

On its own, caffeine does not create anxiety, however, if you already have increased anxiety, it can cause these symptoms to become worse.

On the other hand, caffeine is a central nervous system stimulant. Caffeine can temporarily make you feel more energetic and awake, however, it can give you the jitters. According to the FDA, more than 90% of the world population consumes this stimulant in some form or the other.

Up to 400 milligrams (mg) of caffeine per day is safe for most healthy adults, which’s about the amount of caffeine in 10 cans of cola 4 cups of brewed coffee, or 2 “energy shot” drinks.

Both are unnecessary stimulants for the body and should be consumed sparingly.