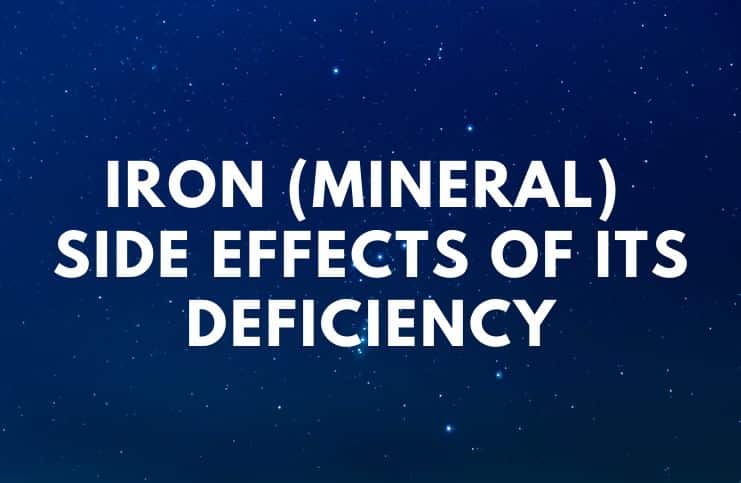 Iron (symbol Fe) is a macro element that is found in all body cells.

Its importance in the body’s economy derives from the amount in which is found, 2.5-5 grams, and from the fact that over 65% of it is part of the structure of hemoglobin in red blood cells (an essential protein in transporting oxygen to cells and tissues).

Fe found in plant products (fruits, vegetables, grains) is absorbed more difficult, but the body can have many benefits due to the consumption of these products.

An increased amount of vitamins, antioxidants, minerals, and fiber is obtained from:

Among the enemies of Fe, we mention phosphates, zinc, copper, coffee, alcohol, processing of fruits and foods in general, excessive boiling or chopping food into small pieces before the boiling process contributes to the loss of high amounts of Fe from food.

Also, phosphoproteins and salts of phytic acid in whole grain may have the same poisonous effect.

An important aspect is a fact that this mineral is not absorbed in the intestines unless its valence is changed in the stomach in the presence of vitamin C. In other words, Fe rich foods must be combined with vitamin C rich foods in order for this mineral to be absorbed properly.

There are situations when the digestive use of Fe is diminished: post-gastrectomy, in states of hypochlorhydria (decreased the acidity of gastric juice), in the presence of excess fat and cellulose in the diet.

In general, the absorption process is regulated by the body’s need for Fe. A young adult, with a balanced diet, will absorb 5-10% of the total amount available in the daily diet. This percentage increases to 20% even in pregnant women.

Excess and Deficiency of Iron

It is found in the body in 2 forms: repository (when incorporated into ferritin and haemosiderin proteins) and the circulator. By making deposits, the body prevents any imbalances that may occur acutely. However, if iron deficiency is long-term and the body is constantly deprived of the input of this mineral, deposits will be exhausted and iron deficiency installs.

The main expression of iron deficiency is anemia (a particular type of anemia due to Fe deficiency, in which red blood cells are small and weakly loaded with hemoglobin and oxygen). Clinically, symptoms of anemia include physical fatigue, shortness of breath, hair loss, headache, irritability, dizziness or weight loss, as well as decreased resistance to various attacks.

Persons with a high risk of developing anemia are – women during the menstrual period (especially if they have an abundant flow), pregnant women, or during the breastfeeding period. Patients with digestive and intestinal bleedings (ulcer, bleeding erosions, inflammatory bowel disease) are also exposed to the risk of developing Fe deficiency, blood donors, patients with digestive pathology (gastric resection, antacid treatment), which decreases the capacity of absorption, patients with gluten enteropathy.

Infants and toddlers are exposed to experiencing anemic states when diets are deficient in iron-fortified products (especially infants who are beginning to have a diversified diet).

By the age of 6-8 months, it is considered that the baby’s Fe stores are sufficient to protect him against anemia, but after this age, parents are advised to introduce iron supplements into the menu.

Breastfed infants don’t need iron supplements, as breast milk is rich in iron. Unlike human milk, cow’s milk has a very low Fe content (this is one reason why its use in infant feeding is not recommended by specialists). For infants that are fed with milk formulas, it is recommended to use only Fe fortified ones.

SEE ALSO:  Reguloid vs Metamucil: Comparison of Uses & Side Effects

Deficiency – Milk and dairy products are low in it and can quickly unbalance the body’s Fe deposits, causing anemia. Children are exposed to this risk if they consume large amounts of dairy products, especially in combination with sugar and white flour products (which are known for their low mineral content).

Also, teenagers are exposed to the occurrence of anemia, due to their growth rate (when development is at its peak) and the poor diet that they are tempted to follow.

Excess – hypersideremia due to food causes (by excessive intake of iron-rich foods) is a condition that occurs sporadically. However, this situation may occur particularly in children if there is an abuse of nutritional supplements or medicines that contain much iron.

Hypersideremia is more common in patients with hemochromatosis (a genetic disease in which the body is unable to regulate the absorption of this mineral). This hereditary disease causes accumulation of iron in tissues and its deposit is so consistent that it leads in some situations to visceral lesions, especially in the liver and pancreas (with manifestations of liver failure and diabetes).

The treatment of such a disease is the phlebotomy (the patient is actually being removed the blood and the amount is comparable to that in the case of blood donation).

This procedure is indicated when the ferritin level is higher than 300mg/liter and is done weekly until this value is below 20 mg. The patient must also follow a strict diet: no alcohol, vitamin C, red meat, and high intake of calcium and products containing oxalic acid.

Free radicals produced by Fe can also lead to cardiovascular diseases. These free radicals can oxidize cholesterol in the blood, leading to an increased risk of attaching to arteries and blood vessels in the body, especially arteries responsible for transporting nutrients and oxygen to the heart.

This way, atheromatous plaques that block arteries form much faster and the tissues supplied by those arteries will not get enough blood to feed them. If the affected tissue is the heart, it will suffer ischemia, lesions, and even necrosis, ie death of cardiac tissue (heart attack).

First signs of excess, include epigastralgia, as a direct expression of stomach erosion by gastric mucosal damage.

If Fe reaches certain critical values, patients may enter a state of shock. In these rare but dangerous situations, it is indicated to administer an iron chelator, such as deferoxamine (this removes excess Fe, favoring its elimination through urine).

Fe rations recommended by specialists are:

Pregnant women have a higher need for Fe, which can reach 20-30 mg in the last quarter of pregnancy. However, during the postpartum period, there is no need for an increased intake (considering that in the first months, menstruation is absent).