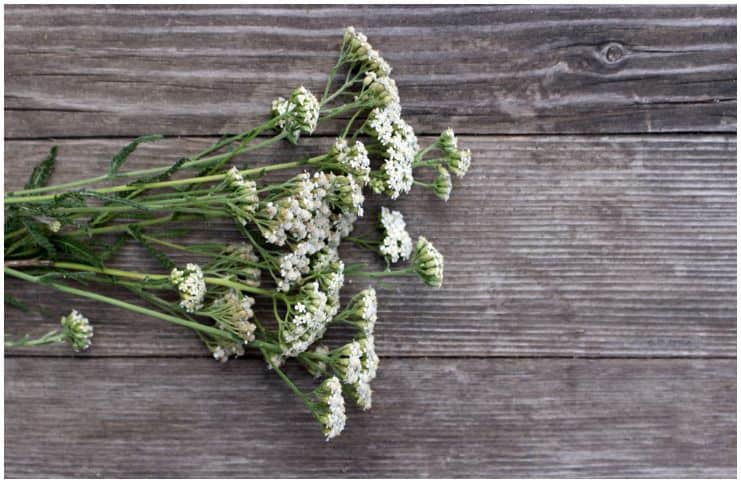 Achillea millefolium, usually known as yarrow, is a flowering plant in the family Asteraceae.

In antiquity, the herb was known as herbal militaris, for its use in stanching the flow of blood from wounds.

In Sweden, the plant it is called „Field Hop” and has been used in the manufacture of beer. Its French name „herbe de St. Joseph” is derived from a tale according to which Joseph one day hurt himself while working on his carpentry.

The infant Jesus brought him some yarrow, which immediately staunched the bleeding and healed his wounds.

The word „Achillea” refers to Achilles, an ancient hero. Achilles said that he used yarrow for himself and for his soldiers. „Millefolium” signifies „coming of a thousand leaves”. Archaeologists have found neanderthal yarrow plant, dating back to 60000 BCE.

In the medieval period, Anglo-Saxons used an extract from this plant for wound healing.

It is native to temperate regions of the Northern Hemisphere in Asia and Europe. Common yarrow from Asia and Europe was originally introduced to America in colonial times and has since naturalized all over the United States primarily along fields, roadsides, waste areas, and lawns.

It has been used as a feed for livestock in places like Australia and New Zealand. However, it is a weed in those places and sometimes also in its native regions.

It was one of the herbs dedicated to the Evil One, in earlier days, is sometimes known as Devil’s Plaything, Bad Man’s Plaything, or Devil’s Nettle.

In China, this herb is also used for divination, nevertheless, the practice is of quite a different order. The ancient oracle of the I Ching is generally cast with Achillea millefolium stalks, which are thought to represent the Yang and Yin forces of the Universe in perfect balance.

The plant grows from sea level to 3,500 meters (11,500 ft) in elevation. The plant usually flowers from May through June. The herb is generally found in the mildly disturbed soil of grasslands and open forests. Active growth occurs in the spring. It grows to 3 feet tall and has no branches except near the top.

The leaves are alternate, three to five inches long, with many leaflets on each side of the midrib; and these are further divided into smaller leaflets, giving them a delicate, lacy appearance.

This plant is a good companion plant in the vegetable garden. Its root secretions are said to be enhancing to other herbs and actually make them more disease resistant. It is also said to keep harmful insects and ants away.

It also contains salicylic acid, a drug closely related to modern-day aspirin. Extracts of this plant exhibit antibiotic activity and may also act as anti-neoplastic drugs.

It has seen historical use as in traditional medicine, administered both externally and internally. This herb plant was first used by ancient Greeks over 3,000 years ago for treating external bruises on the skin.

The herb is used in the treatment of a very extensive range of disorders but is particularly valuable for treating colds, treating wounds, stopping the flow of blood, fevers, kidney diseases, menstrual pain.

In addition, it is an efficient anti-inflammatory and diuretic in cases of urinary infections, such as cystitis.

The essential oil, extracted by steam distillation of the flowers, has been used as an anti-inflammatory or in chest rubs for influenza and colds. The leaves have antiseptic properties and are useful as a poultice for fresh wounds and bleeding piles.

Additionally, it is considered a balancing and harmonizing plant and can be used for emotional disturbances related to menopause or PMT. It is said to harmonize conflicting emotions and may be used for chakra balancing.

In herbal remedies, it is sometimes combined with herbs like – mullein, peppermint, ginger, elderflower, sage, echinacea, or lemon balm.

This healing herb intensifies the medicinal action of other plants taken with it and helps eliminate toxins from the body.

The herb makes an excellent skin wash, its astringency making it especially beneficial to oily complexions. Pour two cups of boiling water over about one cup of crumbled dried flowering tops, strain and cool. Pat on the skin. This wash soothes chapping and minor irritations as well.

Internally, the tea raises the body’s temperature and makes you sweat. It also makes a bitter tonic and stimulates digestion.

The plant can be used dried or fresh. Although the tea is considered bracing, it can taste bitter. Most tea recipes include sweeteners like stevia, yacon syrup, or coconut sugar.

Recommended dosage and administration for adults

Side Effects of Yarrow

In rare cases, the herb can cause serious allergic skin rashes; extended use can increase the skin’s photosensitivity. This can be triggered at first when wet skin comes into contact with cut grass and A. millefolium together.

Extended use of this plant, either in the diet or medicinally, can cause allergic skin rashes. In one study, aqueous extracts of yarrow impaired the sperm production of laboratory rats.

The plant is contraindicated in individuals with an existing hypersensitivity to any member of the Asteraceae family. If you are sensitive to aspirin, you may also be allergic to this amazing herb. Its use in epileptic patients is contraindicated.

Seek an expert herbalist before using it.