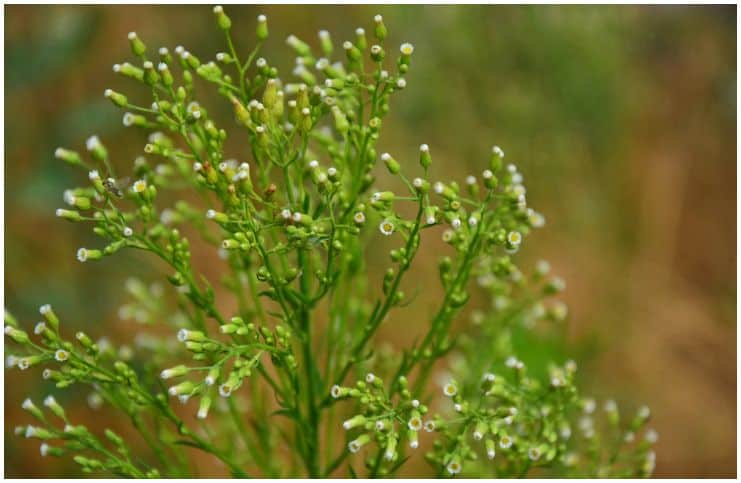 Conyza canadensis, commonly called Canadian fleabane or Canadian horseweed, is an annual plant native throughout most of North America and Central America.

The plant can also be found in the European part of the former USSR, the Caucasus, Eastern, and Western Siberia, the Far East, Central Asia, Scandinavia, Atlantic, and Middle Europe, the Mediterranean, Asia Minor, Mongolia, Iran, Japan, Australia, and China.

It is a mainly annual herbaceous weed spreading by producing high numbers of wind-dispersed seeds.

It has a height of 3 inches to 10 feet. This species is found in prairies, gardens, fields, along roadsides, and stream edges. It blooms from June to September. It belongs in the family Asteraceae.

It favors undisturbed sites and is a particular problem in low-tillage systems such as orchards, plantations but also in some agricultural crops. It was the first weed to have developed glyphosate resistance, reported in 2001 from Delaware.

The oil from this plant contains 47 volatile components, 91% of which are terpenoid. Moreover, the plant contains a variety of flavonoids and tannins in addition to the essential oils.

Horseweed is especially suitable for dysentery, diarrhea, internal hemorrhoids and hemorrhage. Native Americans boiled the root to make a tea for menstrual irregularities and burned to create a smoke that warded off insects.

Furthermore, Canadian horseweed has also been recommended for rheumatism and bladder problems. It is excellent for colon trouble, cholera, and summer complaint.

A 2007 study about the effects of different parts of extract from medicinal plant Canadian fleabane, concluded that the herb extract had the strongest inhibitory effect on aggregation stimulated by collagen and seems to be responsible for antiaggregatory properties.

An infusion of the plant has been used to treat internal hemorrhages and diarrhea or applied externally to treat bleeding piles and gonorrhea.

For medicinal purposes, the herb can be harvested at any time and is best used when fresh. The dried plant should not be stored for more than a year. The leaves are experimentally hypoglycemic. The seeds can also be used.