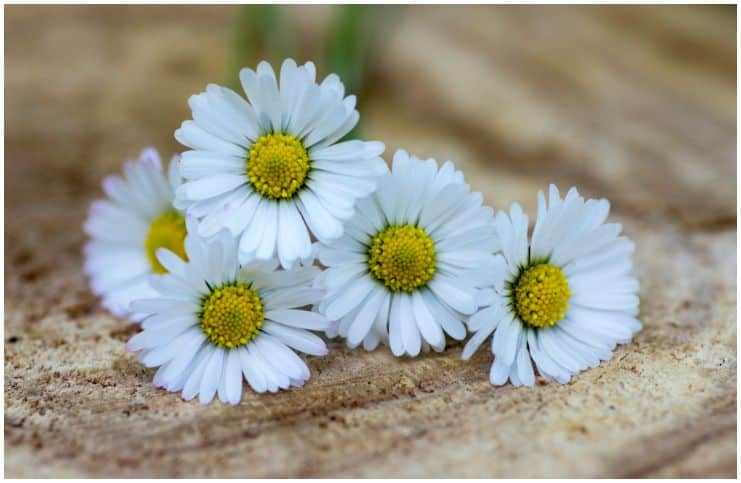 „Bellis”, the genus name, comes from the Latin bella, which signifies „beautiful” and „perennis” means, just as it sounds, „perennial”.

It is native to western, northern and central Europe, but it has also been introduced in North and South America, and some other parts of the globe.

The plant was described by Chaucer as the „the emperice and flour of floures alle” and „day’s eye”. The species habitually grows on lawns and is difficult to eradicate by mowing – hence the term „lawn daisy”. Wherever it appears, it is generally considered an invasive weed.

The English daisy flowers for much of the year. The flower-heads are composite, in the form of a pseudanthium, consisting of many sessile flowers about 2–3 cm in diameter.

It can grow up to 20 cm in height and forms new shoots from the creeping root. The plant blooms in vibrant shades of rose, red and white. It grows in lawns, meadows, lawns, and other grassy areas.

It may be used as a potherb. Young leaves can be eaten raw in salads or cooked, noting that the leaves become increasingly astringent with age.

Flower buds and petals can be eaten raw in sandwiches, salads, and soups. It is also used as a tea and as a vitamin supplement.

Furthermore, the plant is a popular domestic remedy with a wide range of applications. The medicinal properties of daisy were recorded as far back as Gerard’s Herbal in the 16th century, who had recommended the use of this plant for treating catarrh, heavy menstrual bleeding, migraine, and for bruises and swellings.

The daisy’s roots and leaves were traditionally used to heal wounds. In ancient Rome, the surgeons who accompanied Roman legions into battle would order their slaves to pick sacks full of daisies in order to extract their juice, hence the origin of this plant’s scientific name in Latin.

Bandages were soaked in this juice and would then be used to bind sword and spear cuts.

The flowers have been used in the Austrian herbal medicine internally, like tea, for treating disorders of the gastrointestinal and respiratory tract.

In homeopathy, it is administered orally to relieve tenderness or discomfort and facilitate quick recuperation from any surgery or injury.

Moreover, the plant is also beneficial in treating uterus problems accompanied by bleeding and debility. It is also effective in treating the devastation of the organs in the pelvic region, accompanied by acute pain and a bruised sensation in the area.

It may be used for loss of appetite as it has a stimulating effect on the digestive system and it has been used as a treatment for many ailments of the digestive tract, such as diarrhea, gastritis, liver, and gallbladder complaints and mild constipation.

A tincture made from the plant can be used for acne, as a mouthwash or a gargle, and also as a remedy for a sore throat and mouth inflammation.

In addition, chewing on the fresh leaves might be helpful as a relief for mouth ulcers.

Common Daisy – Side Effects And Warnings

Homeopathic practitioners do not usually recommend using this herbal remedy in individuals with blood problems, such as those with a predisposition to developing blood clots and those with anemia.

Lactating or breastfeeding mothers are also encouraged to avoid using this herbal remedy. If you are taking muscle relaxers or hypoglycemic drugs, do not use this herb. Always consult your physician for guidance.